“After all, crime is only... a left-handed form of human endeavor…” 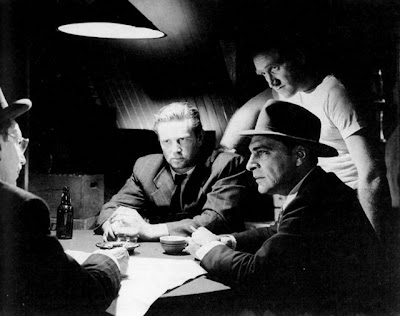 (Warning: possible spoilers contained within)
In his invaluable movie reference tome Guide For the Film Fanatic, film historian Danny Peary observes that the reputation of John Huston’s The Asphalt Jungle (1950) “has diminished somewhat. Because Huston strove for realism, he deglamorized the characters involved in the crime: the result is that we find the characters and their story interesting but don’t feel any empathy for them.”

Jungle made its debut on movie screens 60 years ago on this date — and while Peary’s taste in films and my own movie preferences are often in perfect harmony as a general rule, I disagree with his assessment; I had an opportunity to revisit Jungle not too long ago and remain convinced that it’s still an important and seminal film noir — providing the essential blueprint for the “caper” film by showing how professional crooks get the job done…and how on occasion a guy named Murphy (he has a law named after him) will get involved to the point where he gums up the works.

Criminal mastermind Doc Erwin Riedenschneider (Sam Jaffe) — often referred to by his associates as “Professor” — has finished a long stretch in the pen and has hatched a “caper” that stands to net him nearly $500,000 in stolen jewels. He needs $50,000 in seed money to hire safecracker Louis Ciavelli (Anthony Caruso), driver Gus Minissi (James Whitmore) and “hooligan” Dix Handley (Sterling Hayden) for the heist, and hopes to interest criminal lawyer (in every sense of the word) Alonzo D. Emmerich (Louis Calhern) invest in the enterprise for a third of the take. Doc is unaware that Alonzo’s lavish lifestyle is all a front; he’s flat broke and greedily plans to double-cross Doc and his confederates by offering to “fence” the jewelry himself.

The assembled team carries out Doc’s plan but unforeseen events threaten to scotch the entire design — most notably, a gun belonging to a security guard accidentally discharges upon hitting the ground and ends up wounding Louis in the gut. Dix also takes one in the solar plexus when he and Doc arrive at Emmerich’s after the robbery and the lawyer’s flunky (Brad Dexter) shoots it out with Handley after the double-cross is revealed. From that moment on, it’s every man for himself: Louis dies from his wound, Gus is taken into police custody (after the bookie [Marc Lawrence] who financed the heist sings to the cops) and Emmerich commits suicide when the police arrive to haul him in as well. Doc is inches from a clean getaway but is picked up by John Law when he dawdles at a roadhouse watching a young woman (Helene Stanley) seductively dance to the music from the jukebox (the Professor has a weakness for sweet young thangs). Dix makes tracks for Kentucky with his loyal girlfriend Doll Conovan (Jean Hagen) in tow — and dies in a field at his boyhood farm, disinterested horses licking his face.

There’s just something inside film audiences that makes them root for those individuals destined to break societal rules (like pulling off a successful heist — or, as Alfred Hitchcock once demonstrated, fishing around for an incriminating cigarette lighter in a storm drain)…even when they know the enterprise is doomed from the get-go (we learn early on that Emmerich is planning — to use a turn-of-phrase of Handley’s that miraculously got past the censors — to “bone” the men involved). But Peary’s argument is that “we care only for the women who suffer because of their men’s foolish endeavors;” namely Doll, Emmerich’s invalid wife (Dorothy Tree) and “doxie” (Marilyn Monroe), and Louie’s widow (Teresa Celli).

I don’t disagree that audiences don’t commiserate with the women — but the male characters aren’t without sympathy either. Louie’s unsavory profession of being a “boxman” doesn’t dilute his feelings for his wife and son, and Gus — despite his tendency to associate with the seamier elements of society — remains a right guy; he’s good-hearted enough to take in and feed a stray cat and what’s more, threatens to kick the ass of a cabbie who casually remarks that he “runs over any cat he sees.” Doc is a refined, cultured individual — much more so that the transparently urbane Emmerich — who would undoubtedly make fine company over dinner, with a wealth of stories at his disposal. As for Dix: it’s hard not to feel sorry for a man who lost his livelihood — farming and horse breeding — due to a series of bad breaks. He tells Doll: “…one of these days I’ll make a real killing, and then I’ll head for home.” (This line always makes me smile, seeing that actor Hayden plays a similar felon down-on-his-luck in another classic caper film, 1956's Kubrick classic The Killing.) In fact, the most unsympathetic characters in Jungle are those of the police — consider detective Ditrich, who’s as crooked as the proverbial canine dog leg (of course, he’s played by Barry Kelley — what were you expecting?). Not to mention Police Commissioner Hardy (played by John McIntire, an actor generally revered at Thrilling Days of Yesteryear), who comes across as a pedantic scold; a refugee from a Crime Does Not Pay short.