This is a love story 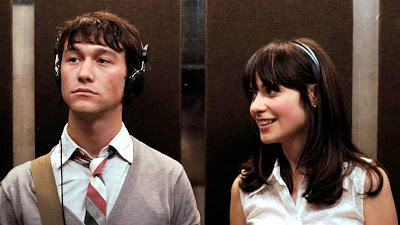 By Edward Copeland
Not the boy-meets-girl story told in (500) Days of Summer: The film is upfront about that. This is a love story between a man and a movie. I first saw (500) Days of Summer during the days when this blog was on hiatus and I didn't want to write about it from memory. Besides, I wanted to watch it again. Now, I have and I'm ready to share my affection for the film with the reading world.

One regret that I've always had, one I imagine that is common to all movie lovers, is that same regret Burgess Meredith's character's had in the Twilight Zone episode "Time Enough at Last:" There just isn't enough time for him to read all the books that he wants to and even a nuclear holocaust won't help. For me, it's worse. Not only am I losing the battle with time to see all the movies ever made that I want to see, they keep making 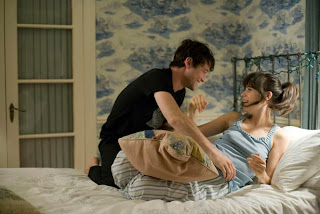 more of them. Pile on top of that that I'm a voracious reader as well, so when am I going to find time to read all those books? It's a good thing there are very few series on TV I pay attention to and they usually have short seasons and long hiatuses. Mortality can prove to be a definite hindrance and I can just imagine how difficult it must be for people who share my affliction and aren't bedridden and actually have to hold down jobs to work for a living. Granted, the movie industry has done their part by producing so much garbage that my radar usually detects titles not worth my time. However, what makes things even more complicated is that when the great movies get made, be they classics such as Rules of the Game or Casablanca, I want to revisit them, eating up more of my life. While I'm not remotely prepared to place (500) Days of Summer close to that rarefied company, after seeing it a second time, I know this is one of those films that I will want to see many more times in what remains of my existence.

When (500) Days of Summer first opened, I feared it might be too gimmicky (those unnecessary parentheses may have helped that impression along). As with nearly every film, I didn't get to see the film until it hit DVD 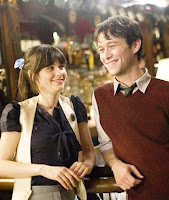 and I was bowled over. What people who disliked the film might dismiss as gimmicks played as perfect grace notes to me, from the funny opening assurance that any resemblance to real people was purely coincidental to the great narration that would recur throughout the film by Richard McGonagle. His opening set the stage perfectly and cast the film's spell over me as he explained the back story of Tom Hansen (Joseph Gordon-Levitt), who thanks to an early exposure to sad British pop music and a misreading of The Graduate, believed that the search for love always leads to The One. Though he set out to be an architect, Tom works as a greeting card writer and it is there where he meets Summer Finn (Zooey Deschanel), the woman he knows is his soulmate. They soon begin dating (what else do you call spending lots of time together and having sex?) despite Summer being crystal clear from the outset that she just wants to be friends because she believes love is a fantasy and relationships are messy. Tom hears what she is saying, but because he loves everything about her, he's sure he has the power to change her mind.

My curiosity naturally wonders how couples who saw this movie together viewed it because to me, despite it basically being a comedy, albeit one with touching moments, it seems to be one destined to be a conversation 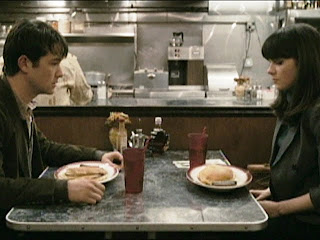 starter and films such as that are far too rare these days. While Summer never misleads Tom about her feelings, she certainly acts as if she's his girlfriend and I've never heard of a best friendship that functions the way she thinks hers does with Tom, so it's understandable when things come to their end why Tom becomes so confused and devastated. Then again, I'm a guy. I wonder if a woman watching the film would have a completely different reaction. One reason I think (500) Days of Summer affected me so is that, though these characters are much younger than me, I feel as if I know these people, as if I grew up with them. Director Marc Webb is five years younger than me and I don't know how old screenwriters Scott Neustadter and Michael H. Weber are, but they look a lot younger than me. Of the many laughs I had watching the movie, one of the biggest was when Summer tells Tom that lately they've basically been acting like Sid and Nancy. He objects, saying Sid Vicious stabbed Nancy Spungen. "No, I'm Sid Vicious," Summer replies. For someone my age, whose high school years included Alex Cox's Sid & Nancy as an extremely pivotal film, it's a spot-on gutbuster. In an odd way, it reminds me of Heathers. Not in terms of plot obviously, but that it's one of those films that I could imagine myself making, not better mind you, just the type of movie that could spring from my mind.

Webb's direction smoothly handles the endless time shifts and bits of whimsy in Neustadter and Weber's screenplay. So many movies play with chronology, especially in the wake of Tarantino, that many times it can play as a cliche, but the way (500) Days uses it, it not only seems fresh but necessary. At the very beginning, 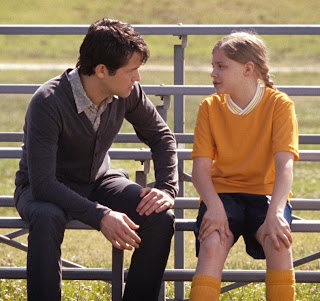 we are informed that while it is a boy-meets-girl story, it is not a love story, so we know that by the film's end, Tom and Summer will not be a couple. If it followed standard, chronological order, this would be a bit of a bore as well as a downer. What also makes the technique great here is why it's so good in a masterpiece such as Citizen Kane: you are never certain which scene comes next so each viewing seems fresh. In fact, though some may classify the film as an unusual romantic comedy, it's more akin to a crime procedural with Tom going back over the clues in his head to try to solve the mystery of how what were the happiest moments of his life turned into the lowest moments. His really smart younger sister Rachel (Chloe Grace Moretz) more often than not turns out to be Tom's voice of reason and she's the one who gets him to think back to the times that weren't good in order to realize that Summer wasn't The One she thought he was. It's not just the dialogue that sparkles. The script's ingenuity extends to the aforementioned narration (He describes the unusual effects Summer's presence always has had including a 212% spike in sales when she worked at a particular ice cream parlor and an average 18.2 doubletakes on each commute she took to and from work) and a scene where a despondent Tom imagines himself and Summer in scenes from classic foreign films. It's really in great contrast to the similar scene in Precious, because you are supposed to laugh in (500) Days whereas in Precious, the scene is just ridiculous and terribly out of place. Of course, the film's most unexpected moment, which could have easily fallen into disaster, is Tom's post-coital exuberance which begins with him looking at his reflection in a car window and seeing Harrison Ford as Han Solo grinning back before it turns into a full-fledged musical number (to Hall & Oates no less) throughout the park. It's glorious, especially its denouement which starts with him entering an elevator in joy and exiting on another day in the doldrums. 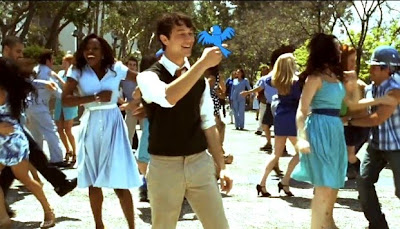 Even with the great writing and great direction, this movie wouldn't work if it didn't have a cast up to the task and (500) Days does. Few actors who began working as children have developed into such dependable 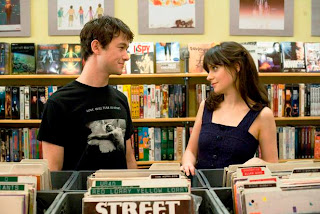 adult actors as Gordon-Levitt has (and what range). His dramatic turns in films such as Brick, Mysterious Skin and most especially The Lookout really show no preparation for the range here, mostly light, but more complicated than that. (This isn't 3rd Rock From the Sun-level comedy either.) The look he gets when Summer kisses Tom by the copy machine unexpectedly is a thing of wonder. Deschanel has the tougher assignment because she has to play multiple impressions of Summer. She has to be the charming girl that Tom falls for and the cold woman who thinks it's OK to lead him on because she established to him that they aren't a couple from the outset and she accomplishes all this without ever earning the viewer's scorn. While she's been fine in some good films before, (500) Days is by far her best work on the big screen. I could go on forever talking about (500) Days of Summer, but I don't want to give all its wonderfulness away. In the end, this is less a film about love than about the role of fate in all of our lives and really that's what happens with all movies as well. If all the creative forces hadn't aligned in the right way, the world would have been deprived of (500) Days of Summer and that would be a much sadder world indeed.

An excellent review of a great film. One of my favorites of last year.

Fantastic review. I forgot the Han Solo moment -- one of many gags that go streaking by -- so that was worth reliving a laugh. And I like what you say about Deschanel having to play "multiple impressions of Summer," a difficult task that she hasn't gotten nearly enough credit for.