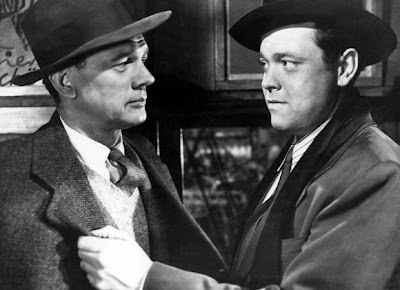 (Warning: possible spoilers contained within)
By Ivan G. Shreve, Jr.
Sixty years ago on this date, the Grand Prize winner of the 1949 Cannes Film Festival had its American premiere in New York City — and I mention this only because there may be one or two people confused as to why Carol Reed’s The Third Man (1949) is being commemorated in 2010 as opposed to 2009. Since its introduction to American audiences, the film has become a yardstick by which classic suspense thrillers are measured, telling an engrossing tale of crime and corruption in post-war Vienna as concocted in a novella by author Graham Greene, who also wrote the screenplay for the film.

Novelist Holly Martins (Joseph Cotten), a writer of pulp fiction Westerns, arrives in Vienna at the request of an old friend named Harry Lime (Orson Welles), who has offered Holly a job in his “business,” as Holly is a bit “down on his uppers.” No sooner has he arrived in the city when he learns from a porter (Paul Hörbiger) in Harry’s apartment building that Lime is dead (killed when he was hit by a truck driven by his chauffeur); Holly has barely enough time to witness the body of his friend being buried in a nearby cemetery. The witnesses to Harry’s demise are two of his friends/associates — "Baron" Kurtz (Ernst Deutsch) and Popescu (Siegfried Breuer) — and Harry’s personal physician, Dr. Winkel (Erich Ponto), also is apparently involved … having conveniently been passing by when Harry had his fatal accident.

The whole incident smells a bit fishy to Martins … and he’s not the only one with suspicions. Major Callaway (Trevor Howard) has been investigating the case, because he knows more about Lime than his buddy Holly — that Lime is one of the most notorious racketeers in Vienna, up to his neck in black market activities. Holly refuses to believe this, and vows to stick around until he’s cracked the case; he talks with Harry’s friends, doctor … and even Harry’s lover, a theatrical performer named Anna Schmidt (Alida Valli). Their stories are riddled with inconsistencies — and Holly is particularly wary when the porter tells him that a mysterious “third man” was at the scene of Harry’s mishap.

Things start to go from bad to worse: Anna is taken in when it is learned that her passport is a forgery, and Holly becomes the No. 1 suspect when the porter turns up murdered. Callaway finally lays all his cards out on the table, and shows Martins solid evidence that Lime was involved in a scheme to steal penicillin from the military hospitals, then diluting it and making a killing in the black market. He presents Holly with sobering pictures of children who were treated for meningitis with Harry’s cut-rate medicine, and Martins becomes physically ill at both the photos and the knowledge he now has that his chum is, in essence, a murderer. After learning the truth about Harry, Holly returns to Anna’s lodgings and tells her what he’s learned from Callaway — but since she’s still upset by her loss she dismisses what he has to say. On his way back to the hotel, he calls out an individual who’s been “shadowing” him, and demands that he show himself. This is done with the simple flick of a light switch from an apartment overhead…and Holly is stunned to see that the figure is Harry Lime!

Holly reports what he has seen to Callaway, who orders that the coffin buried in Harry’s “grave” be dug up — and it is revealed that the body inside is that of Joseph Harbin, one of Lime’s “partners” in the penicillin racket (he worked as a hospital orderly, which gave him access to the medicine). Holly at first agrees to be a decoy in flushing Lime out of his hiding place (the police discover that Lime has taken up temporary residence in the sewers of Vienna), but Anna begs him to reconsider — it takes a visit to a children’s hospital ward (populated with Harry’s “victims”) and a promise from Callaway that Anna’s passport problems will disappear before Holly goes through with the plan … and Harry Lime meets his demise at the end of a suspenseful chase climax through the sewers, courtesy of a bullet from his best friend’s gun.

The very first time I saw The Third Man was in 1985, when the professor in a film class I was taking showed scenes from the movie to illustrate some of its breathtaking visuals (courtesy of Robert Krasker, who won an Academy Award for best black-and-white cinematography for 1950) — like the way director Reed presented some scenes at a slight tilt to emphasize the dizzying, disorienting effect Vienna had on Man’s protagonist. At the time, I had just started collecting movies on VHS and I was fortunate to find the movie cheaply on videocassette because the film had fallen into the public domain. (The film later had its copyright protection restored in 1996.) The version I had on VHS was the U.S. version, which featured Cotten’s character narrating at the beginning; this was done because the U.S. producer, David O. Selznick, wanted to present Holly Martins in a more positive light (and eventually edited out an additional 11 minutes from the U.K. version in order to accomplish this). The original U.K. version featured an unknown narrator (later identified as director Reed) whose opening remarks reveal him to be in the same “business” as Harry Lime; this complete print is the one now available on DVD and shown regularly on TCM.

Since my first encounter with Man 25 years ago, I can confidently say that I manage to revisit this wonderful film every year — even though I know the plot and most of the dialogue by heart. It is a prime example, according to director/film critic Peter Bogdanovich, of what he calls the “non-auteur” film: that the success of Man comes from the involvement of several different sources — the crisp, economical direction of Carol Reed; the complex (and oftentimes very witty) screenplay from Graham Greene; the star wattage of actors Cotten, Welles, Howard and Valli, performing at the peak of their powers; and the supervision of both Selznick (who was universally reviled by both the cast and crew) and Alexander Korda. A notable contribution to the film was the zither music of Anton Karas, whose jaunty "Third Man Theme" became an international hit upon the movie’s release. (To this day, my father will refer to the film as The Third Man Theme, and all attempts to get him to eliminate the unnecessary last word have proved futile.)

It was thought for many years that Welles — also a writer, director and producer in addition to his thespian skills — may have had a hand in partly directing Man; it’s kind of hard not to watch the movie and detect the influences of Welles productions like Citizen Kane (1941), The Stranger (1946) and The Lady from Shanghai (1947), but Welles was insistent that the direction was all Reed’s, labeling him “a hell of a director” — and a man who brought such classics to the screen as The Stars Look Down (1940), Night Train to Munich (1940), Odd Man Out (1947) and The Fallen Idol (1948) certainly didn’t need Orson to show him the ropes. (Reed’s star has since fallen among cinephiles because many of the movies he made at the end of his career are not considered his best — even though they ironically made more money that his “masterpieces.” I have a soft spot for The Man Between [1953], a Cold War-thriller set in Berlin and very reminiscent in both plot and character of Man.)

Welles did make a couple of contributions to the dialogue, including the mention of his “stomach troubles” (which was improvised) and one of the most memorable observations in the history of cinematic dialogue:

"Don't be so gloomy. After all, it's not that awful. Like the fella says, in Italy for 30 years under the Borgias they had warfare, terror, murder, and bloodshed, but they produced Michelangelo, Leonardo da Vinci, and the Renaissance. In Switzerland they had brotherly love — they had 500 years of democracy and peace, and what did that produce? The cuckoo clock. So long, Holly…"

Third Man was one of the first movies to teach me that while movies could look sensational in black-and-white, the outside world was often not the case. Holly Martins does the right thing by ratting out Lime in Man — despite his friend Harry’s charming, roguish personality he is also a criminal, and his business practices stand to hurt more innocent individuals if he’s allowed to remain free. Yet Lime has a point when he remarks to Holly (as the two men are looking down at the ground from their view on-board a Ferris wheel): “Would you really feel any pity if one of those dots stopped moving forever? If I offered you 20,000 pounds for every dot that stopped, would you really, old man, tell me to keep my money, or would you calculate how many dots you could afford to spare? Free of income tax, old man. Free of income tax — the only way you can save money nowadays.” The ambiguity of an individual’s actions — presented against the background of a city so war-torn that its new mission statement has almost become “survival of the fittest” — is hammered home at the movie’s end when Holly has Callaway stop the car so he can talk to Anna (they’ve just buried Harry a second time). Anna walks right by Holly without so much as a by-your-leave … and our “hero” is left standing there, cigarette in hand and completely flummoxed as to why he didn’t get the girl — with the words of his former friend ringing in his ears: “The world doesn't make any heroes outside of your stories.”

Ivan G. Shreve, Jr. blogs at Thrilling Days of Yesteryear and also has written an essay on the radio series, The Lives of Harry Lime, created in the wake of the success of The Third Man — but it’s at his old Salon Blogs address, so you’ll have to click here.

Comments:
one of my favorite classic movies..
I love Joseph Cotten here and in Shadow of A Doubt as well...