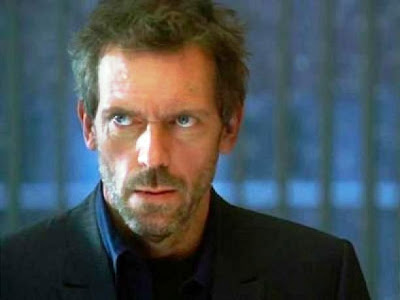 By Edward Copeland
Given the fact that in 2008, I spent three-and-a-half months in hospitals and all the time since in a hospital bed in my bedroom with the exception of trips to hospitals and doctors, you would think that the last television series I'd embrace would be a medical drama, but I did. Granted, I came to House late in its run, but its lead character is the type of physician I long for.

Dr. Gregory House reminds me a lot of myself: We're both misanthropic, don't suffer fools gladly and endure chronic pain. Unfortunately, I don't share his seemingly unlimited access to painkillers because I would make a great pill addict. Actually, I don't know if that's true. It's been my experience that after awhile, I build up a tolerance to certain medications and have to try another. Surely by now, Vicodin has outlived its usefulness for House.

Then again, it might have. One of the problem with coming to a series late and not doing it by getting season DVDs and watching it in order means I have huge gaps in terms of story. Hell, I don't know what caused House's leg injury in the first place.

I've seen episodes involving Chi McBride as the rich pharmaceutical entrepreneur who buys the hospital and gives House hell but I've never seen episodes explaining how that resolved itself. Still, it doesn't matter because the show's medical mystery formula is so solid and Hugh Laurie is so damn entertaining.

Why hasn't this man won an Emmy? I have to wonder if Emmy voters have something against giving the prize to British actors playing either Americans or in American settings in drama series. Hugh Laurie, Ian McShane. Can anyone else think of any examples?

The supporting cast on House is fine, especially his relationship with Robert Sean Leonard, but Hugh Laurie is the show. I wish there really were a Dr. Gregory House.

There isn't a lot of mystery to my various ailments, but I bet he could help me and if he did come to see me, I might be that rare patient he'd get along with. Then again, we might be too much alike for that.

Comments:
I was also a late comer to House and now it's my favorite show.

House's leg problem is caused by an infarction in his thigh muscle. Essentially he had a heart attack in his leg which is just as awful as it sounds.

You need to see the episode "Three Stories" which provides House's origin and is one of the best television episodes I've ever seen.

I enjoy House immensely as well, but often find it clashing with something else I need to do that night. One of the things I love about it is that it's not a high commitment series like Lost or Prison Break and you can come in at literally any moment and start enjoying it.

HOUSE is spectacular in its first three seasons. I like the fourth and fifth a bit less, but Laurie is very, very good. And I second griftdrift's suggestion: "Three Stories" is a must. It's at the end the Season One DVD (I want to say it's the last episode of that season, but I might be wrong). It's really great, especially if you like the character.

I've been with HOUSE since the very first episode. All I can say to you is to BUY the DVD's, or make it a point to watch EVERY episode that has aired.
I, too, wish we could all have a Dr. House. My dr. just runs me around in circles. And he's suppose to be the best dr. in town. Many times I have wished that Dr. House was real.
Oh and HUGH LAURIE. What can you say about this AMAZING actor??
I was mesmorized in the very first episode. I didn't know him before and thought, "WHO IS THIS GUY"???
To be able to memorize his lines, speak in American English, remember how to walk while holding the cane....well, it's just remarkable. Not to mention all the facial expressions he has to have.
Anyone missing out on this show is missing A LOT. And anyone missing out on enjoying Hugh Laurie's talents week after week...well, I just feel sorry for them.
I agree about the EMMY. TRAVESTY!!