If it's really funny, I'll laugh 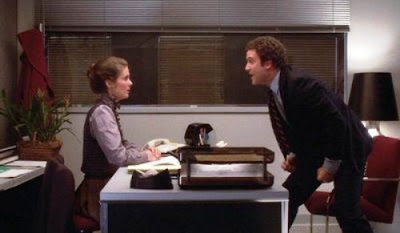 By Edward Copeland
As a writer-director, Albert Brooks had a period where he was mistakenly labeled the West Coast Woody Allen, but his output was never that prolific (which probably saved him from falling into the ruts Allen eventually did). However, he has been a reliable character actor and when he was regularly making his own movies, he made three good ones and three absolutely great ones, the second of which, Lost in America, turns 25 today.

Brooks and co-writer Monica Johnson turned a satiric eye on the yuppie craze sweeping middle-age America in the early 1980s as Brooks and Julie Hagerty starred as David and Linda Howard, two L.A. residents about to move to a new custom-built $450,000 home on the strength of the promotion to senior vice president David expects to receive at his powerful ad agency. Linda also works, a slightly less prestigious job as a personnel manager at a department store. David is so certain of the prize soon within his grasp he's pricing a new Mercedes with Hans on the phone at the auto dealership for a model that comes with everything except leather. (It has Mercedes leather, which Hans describes as "thick vinyl." Brooks plays both sides of the phone call.) His confidence is emphasized further with some wonderful tracking shots through the halls of the ad agency.

It's a slightly more reckless side of David than we see in the opening scene when he and Linda are in bed listening to Larry King interview Rex Reed (that's where this post's title comes from), where David second-guesses having the moving company do their packing. Linda believes they've become a "little too responsible" but David counters that he's insane and responsible and that's a potent combination. A combination that causes problem when instead of getting that expected promotion, he gets what his boss considers better news: the agency has landed the Ford account and wants him to move to New York to help the man assigned to handle it. David goes ballistic, at first thinking it's a joke, then getting angry and hurling epithets before being escorted out of the building by security declaring, "I've seen the future and it's a bald-headed man from New York!" When I originally saw this movie in 1985, I was puzzled by its R rating. There is no graphic violence or nudity and I didn't recall major profanity, but rewatching this scene, there are two "fuck you"'s, one more than would be allowed for a PG-13, new to the MPAA the year before. It's still a dumb rating for the film.

At Linda's workplace, she's depressed already. Picking out tile that morning for the new house, she feels that her life is in stasis and that nothing ever changes. She doesn't like anything anymore and she already knows what the next 10 years will be like with or without David's promotion. When David bursts in, urging her to quit right then so the two of them can drop out of the work-a-day world of society and "touch Indians," her mind is more open to the idea than it might be on a different day. 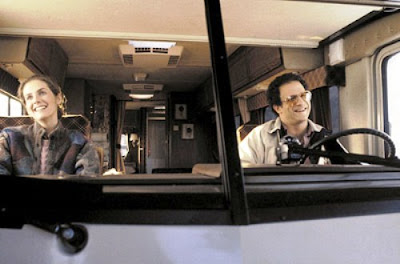 So launches the yuppie version of Easy Rider and one of the funniest comedies of the 1980s, only when "Born to Be Wild" plays on the soundtrack, the camera pans along a Winnebago instead of motorcycles. ("It's better than the new house and it has wheels too," David insists.") Their plan begins by liquidating everything they own, losing what little they've put into the new house and taking he healthy profit they are making by selling their current home. Even after the $45,000 cost of the RV, they have nearly $150,000 in cash (the nest egg) which they believe is more than enough to live on simply as they drop out and get back to the baby boomer ideals they once held so dear back in college. To mark their new start, David and Linda decide there could be no better way than to renew their wedding vows, which they plan to do in a cheesy Las Vegas chapel.

Once they arrive though, Linda cites fatigue and hedges on David's plan to camp out under the stars, suggesting they wed in the morning and have one last night of decadence: Checking into a casino's bridal suite, bathing 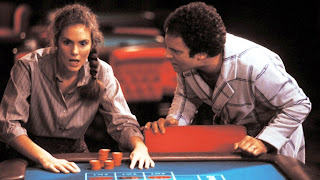 together in one of those big tubs and ordering room service. Unfortunately, bribery is not a skill that comes easily to David and what they get at the now-defunct Desert Inn is the Junior Bridal Suite, which contains two heart-shaped beds you can't push together and a shower. "If Liberace had children, this would be their bedroom" is David's assessment. As someone who actually stayed at the Desert Inn in the mid-1980s and went back to Vegas later, the film serves as a bit of a time capsule as to what a stark difference the Vegas Strip of today looks like compared to the strip of the 1980s. David awakes around 2:30 in the morning to discover that Linda isn't to be found. He wanders in a stupor to the casino floor to find her hovering over the roulette table chanting, "Twenty-two, twenty-two." The floor manager (a hysterical performance by director Garry Marshall) insists he needs to talk with her, that she's way down. At that moment, 22 hits and David is momentarily caught in the euphoria until Linda pushes all her chips back onto 22 again and it's all gone.

(FILM BUFF TRIVIA: For those who don't already know, the significance of the number 22 comes from Casablanca. It's the number Rick rigs the roulette wheel to hit so the young woman and her husband can win on his gaming tables and thwart Capt. Renault.)

David drags Linda into the all-night restaurant to try to figure out what happened and his worst fears are realized: She blew the entire nest egg. Brooks' outrage not only is understandable, it's monstrously funny. "Why 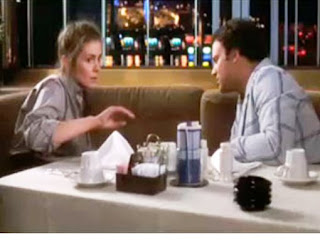 didn't you tell me when we got married that you were this horrible gambling addict? It's like when you have a venereal disease — you tell somebody!" "I've only gambled twice in my life. This was the second time," Linda replies. Desperate to try to salvage this disaster, David visits the casino manager in his office. He's very sympathetic to the Howards, realizing they've lost a lot of money and says that the room and food will be comped. That's not enough for David, who tries to go back into ad salesman mode, trying in vain to sell the manager on an ad campaign where the casino gives the Howards their money back to show that "The Desert Inn has heart" and to separate people like them from "schmucks who come to see Wayne Newton." The manager doesn't bite, but the duet between Brooks and Marshall remains one of the funniest scenes of the 1980s.

From there, Lost in America does admittedly lose a little bit of its steam, but Brooks is such a comic powerhouse and he adheres to the cardinal rule of keeping a comedy to less than 90 minutes, so it doesn't overstay its welcome. At its essence, the screenplay has been devised as a series of interconnected setpieces. Alas, it doesn't keep building in comedic firepower, but it never stops making you laugh and that is more than 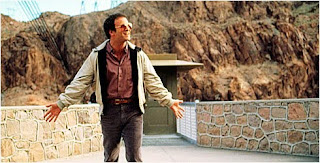 enough. It might seem an odd comparison, but many critics always made much of the slow burn Joe Pesci can make as an actor, from calm to explosive and in at least one scene here, I'd argue that Albert Brooks is the comic equivalent of that turn-on-a-dime Pesci skill. After the Howards exit Vegas, they head out in the RV, uncertain of where to go or how to make do with a little more than $800 left to their name. Linda keeps apologizing profusely, but David stays eerily calm — until they arrive at the Hoover Dam and Linda suggests they stop and check it out. "Nice dam, huh?" David says. "Do you want to go first, or should I?" The dam doesn't burst, but boy does David, first outside and then inside the Winnebago, when Linda insists the public not watch the fight. She actually suggests that they just split what money is left and go their separate ways and that she feels as if she's better now. David is incredulous. "You're better now? I think I was the sickest one to begin with." He then informs her that he obviously failed to explain the concept of the nest egg to her which they will go over in a series of many lectures. He even forbids her from using either part of the word nest egg. From now on, a bird lives in a round stick and she has things over easy with toast.

Quickly running out of cash just to keep the RV gassed up, the Howards roll into a small Arizona town to look 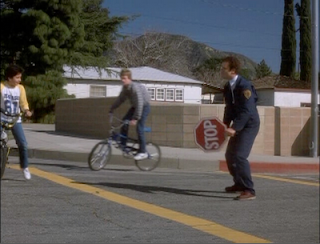 for work. For David, needless to say, his resume makes him horribly overqualified for anything. When he visits the employment agency and mentions his previous salary was usually around $100,000 a year, but he and his wife decided to change their lives, the agency employee reasonably asks, "You couldn't change your life on a 100,000 a year?" Linda lucks into an assistant manager position — at Der Wienerschnitzel, where she impresses her teenage boss Skippy on the very first day by spotting that the french fries were still frozen in the fryer. "That's why I married her," David says sarcastically. "That's why I hired her!" Skippy adds in complete seriousness. David has to make do with a job as a crossing guard where the idea of benefits is a ride to and from the corner. He's not only taunted by the kids, he's taunted when a man in a Mercedes stops to ask for directions to the interstate and he smells that thick vinyl. I'll spare you from the final denouement of the film, in case you haven't seen it, but you can probably guess what happens.

Still, Lost in America is a jewel alongside the other Brooks classics Modern Romance, Defending Your Life and Mother. Real Life and The Muse are worth watching as well. Alas, the same can't be said for Brooks' last writing-directing effort, 2005's Looking for Comedy in the Muslim World. While I might long for more writing-directing baubles from Brooks, at least we've received a wide range of acting performances from him. His feature film debut was Scorsese's Taxi Driver. He was Dan Aykroyd's partner in the prologue to Twilight Zone: The Movie. He received a much deserved Oscar nomination for Aaron Altman in Broadcast News. He also gave great character parts in mediocre films such as Critical Care and sleepers such as My First Mister. He lent his voice many times to characters in The Simpsons. In fact, his voice has been used a lot from the opening in Terms of Endearment as Aurora's husband to the frenzied fish father in Finding Nemo. Albert Brooks is a treasure and Lost in America is one of his most precious gems. 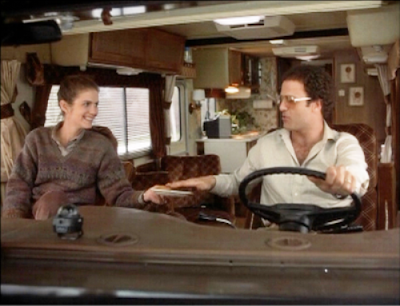 Comments:
Great article but i would have to disagree about Looking For Comedy in the Muslim World. I thought it was just okay when it came out and two months ago watched it again and was blown away. It was the same exact experience I had watching Barry Lyndon in a theater, not liking it, and seeing it three years later.
"Looking" once you got into its groove was one of his best. That's just my two cents.

I was just thinking of this movie recently following the release of Garry Marshall's latest terrible directorial effort "Valentine's Day" (haven't seen it, but I'll take the world's word for it). I was thinking about how much funnier he is as an actor than a director, and I was reminded of the hilarious scene you mentioned from "Lost in America": "This is Las Vegas, we don't need Santy Claus!" Great write-up.