You gotta give 'em hope 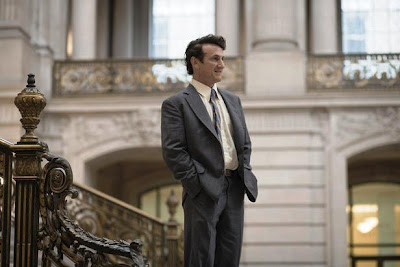 By Edward Copeland
Critics don't like to admit it, but sometimes they go into a film with preconceived notions. The ads for Milk put me off, making it look as if Sean Penn were giving another mannered performance (I've never forgiven him for I Am Sam) and though I avoid reviews of films before I see them, I got the sinking suspicion that the positive ones came from a place of political correctness and the negative ones, some by people I respect, hued closer to the truth. That's why it was such a surprise that when I finally gave in and watched Gus Van Sant's film I found myself riveted and impressed.

Granted, Dustin Lance Black's script does what many a biopic does: Turn its subject matter into a pseudosaint, but it hardly matters because so many of the issues seem surprisingly timely even though they happened 30 years ago. Harvey Milk leads the fight to defeat a right-wing California state senator's state ballot initiative to ban homosexuals from being school teachers as well as any heterosexual teachers who would dare to support gay educators.

Called Proposition 6, it's uncannily reminiscent of California's recent Proposition 8 on banning gay marriage. The big difference: Proposition 6 went down to defeat. Even Ronald Reagan publicly opposed it. If he were alive today, would he oppose all the gay marriage ban nonsense? Hell, to be honest, Reagan would probably be too liberal for today's Republican Party.

The Proposition 6 fight is just one part of Milk, which not only benefits from one of Sean Penn's best and least-mannered performances in a long time, but an amazingly talented ensemble.

Josh Brolin is appropriately frightening as San Francisco city supervisor Dan White, Milk's eventual assassin, coiffed with a hairdo that seems stolen directly from Illinois Gov. Rod Blagojevich's head. To me, the actor who hasn't been getting the amount of credit he deserves is Emile Hirsch as Cleve Jones, who begins as a young man picking up tricks on the street before becoming one of the most successful gay political activists.

Van Sant keeps the film flowing, seamlessly moving between the re-created scenes, actual footage and flights of fancy. Sometimes, as wrong as it is, a critic will come to a film he or she is dreading loaded for bear. That's why it is all the more satisfying when the movie's excellence punctures your balloon.

Comments:
First, an observation - for which some people may accuse me of an inability to be impartial, and others of a desire to be politically correct.

Let's take a look at those "brave" love scenes: a hastilly executed, aggressively enacted fuck in a tent that happened so quickly - and so forcefully - that it felt like everyone was trying involved was just trying to power through it as quickly and painlessly as possible. A make-out scene in which the two boys kissed, yet again, with such unbridled aggression and force that it looked kinda like they were eating eachother's faces off - the harder and faster it is, the less you have to think about it.

I am not among those who feel the sex in Brokeback wasn't graphic enough - that Heath shoulda Broke his Back Mountin' jake, with lots of body parts flying around. What I do think is that there was nothing - not one thing - in any of that film's love scenes that betrayed so much as a whiff of passion or intimacy. Not to put too fine a point on it, but they kissed and fucked like fuck buddies - not lovers. I'm gay, so I can say shit like that - I've lived the difference.

Now look at the kissing and/or sexual scenes in Milk - which are, by the way, nowhere near as sexual or suggestive as the Brokeback tent tussle. Yet they are realistic, sensitive, moving and based in emotional honesty.

Now tell me that a director's sexual orientation makes absolutely no difference in terms of how he or she approaches gay sexual content in the films.

I'm not saying that a straight director can't make a good film dealing with gay themes. I'm saying - and you can call me a bigot if you want - that yeah, it makes a difference.

Now, as for Milk. Great script, great cast, great direction, Sean Penn giving the best performance of his career. Humor, pathos, poltical intrigue, romance, tragedy, uplift, history, heroism and timeliness. What else could you ask for from a movie? Terrific, terrific stuff.