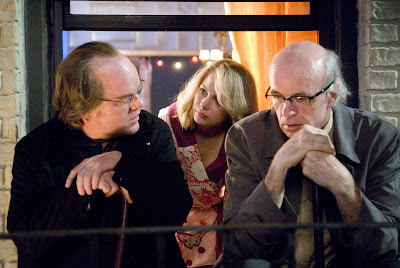 By Jonathan Pacheco
In my book, an imperfect ambitious film far outweighs a perfectly executed “safer” film. Even if it stumbles along its way, I appreciate and admire the aspirations of a movie that tests me. That reasoning has me favoring films like I’m Not There over No Country For Old Men, or A.I.: Artificial Intelligence over almost everything else from that year. Synecdoche, New York has ambitions that, unlike many other 2008 films, go way beyond Oscar. An enigma of a film, it requires multiple viewings if you hope to grasp its meaning. The funny thing about the movie is its ability to mess with you on a different level without you realizing what it’s messed with. A friend and I both felt the same way after watching Synecdoche for the first time: something very deep in us was moved and disturbed by this film, but we had no idea what or how. That sounds like my kind of movie.

To take this trip into the world of Caden Cotard (Philip Seymour Hoffman) is to grab your literature, philosophy and psychology books and toss them all into a blender. The film starts as a fairly normal piece (by Charlie Kaufman’s standards) about a small-scale playwright and director seeking acceptance and confirmation from everyone. But watching the film, you’ll soon realize that Kaufman threw you down the rabbit hole before it even began. What ensues is an odyssey through time full of microcosms, doppelgängers, and much confusion.

Synecdoche, New York is not the same kind of puzzle as a film like Mulholland Drive. With Lynch’s film, once you discover the cypher, everything else in the film unlocks neatly. If anything, Synecdoche is a little more like INLAND EMPIRE: you get the feeling that the “key” could explain a lot, but probably not everything. It’s just not that neat. I’m tempted to use this space to discuss interpretations of the film’s events, but I’ll leave that for another time and place; the film’s merits and challenges go way beyond its literal explanation (if it has one, that is).

Some people see Kaufman as a nauseatingly self-indulgent writer whose bag of tricks is empty, and I imagine those people look at Synecdoche as his way of throwing everything at the wall, seeing what sticks. But isn’t that how he wants it all to seem? The very concept of Adaptation plays with this notion of his self-indulgence (which makes him even more self-indulgent, right?), and Synecdoche does the same. Caden is a hack, a director and writer who feels the need to create a work of genius but can do nothing more than rehash the events of his own mind and try to outsmart his audience in the process. During a stage production, he directs his lead to play the role of Willy Loman as an actor who’s aware that the audience has caught onto the irony of said actor playing a role meant for a much older performer. Could this be Kaufman winking at us? Some have pointed out that Synecdoche seems to be Kaufman’s way of finally revealing himself, jokingly or not, as that hack writer throwing everything at the wall. I would theorize that in a very deliberate move, he wants us to think that he’s self-deprecatingly confessing to that with Synecdoche, which couldn’t be further from the truth. The film I saw is a work of calculated chaos.

Yet it’s so much more than tricks, gimmicks, mind games, and self-indulgence. When the film begins, you get the feeling that Caden is already atoning for something, but for what? The heartbreak in it all is that we’ve only seen him as a desperate man trying to make right and we wonder why he always comes up short. He begs and cries for forgiveness, even admitting to wrongs he never committed, only to be denied any relief. Can this process get depressing? Absolutely. The same friend I mentioned earlier said that when the film ended, he was almost afraid to move; he had this unshakable feeling of impending doom. And I can see how some find Kaufman’s tactics heavy-handed, but the key is that he’s never abusive. This is not a cold film. There’s a lot of heartbreak, but that’s because there’s a lot lost that was once loved.

Synecdoche is a crazy, beautiful mess of the literal, the metaphorical, and the allegorical, with moments so painful, I don’t know if I want to laugh, cry, or do both. Walking out of my second viewing of the film, I heard many f-bombs from the audience. Sometimes coupled with words like “masterpiece” and “cinematic experience,” sometimes on the other end of the spectrum with a “what the” before it. I wonder, with what words are your f-bombs coupled?

Comments:
I was bowled over by the film when I saw it in September. Not only did I 'need' to see it again, but I desperately 'wanted' to see it again as well. Unfortunately, I haven't managed to do that, but that's OK - the damn thing is still rattling around and percolating in my brain. I kind of like the idea that the entire film (opening frame to closing) is actually Cotard's play that he made with the grant money (as that might explain some of the surreal touches throughout and the apparent different aging rates of the people in the theatrical company), but it would obviously have to be a version of the play brought to film - and it doesn't come near to explaining everything. Which isn't the point - I don't think you can. There isn't a key to the film (as you mentioned). It's a brain dump of a wonderful bunch of ideas and I love wading through them.

I don't think I've ever enjoyed reading negative reviews (of a film I liked) more than the ones I've read that were critical of Synecdoche (except Rex Reed's of course - that drivel was embarrassing). That just shows me the film really made people react to it and that's a great thing for art to do.

I have a few theories rattling around in my own head about the film, I just need to get some of them down.

I really agree with your last statement. I recommended the film to people, even if I thought they would hate it. To me, it's something that you just have to see for yourself. I'm amazed at how polarizing the film can be.