The reductive power of television 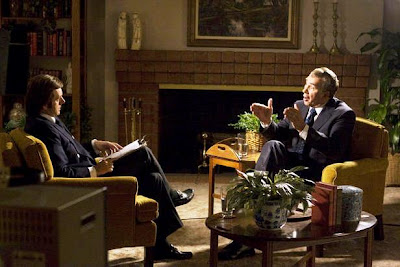 By Edward Copeland
I was not a normal child. In addition to being a movie buff from an early age, I also was a political junkie. It wasn't an inherited trait, but it was part of my existence. In fact, many of my fellow grade schoolers were up on current events (Makes you wonder what the hell happened when now people two or three times that age in the U.S. don't know or care what's going on.) Needless to say, since I was at this age in the 1970s, Watergate was like crack to me and it still is so even a film directed by Ron Howard such as Frost/Nixon is going to have a riveted viewer in me.

Lest you think I'm exaggerating my Nixon/Watergate obsession in elementary school (which included a Nixon impression), in 5th grade I tried to convince my teacher to let me do a book report on a collection of Art Buchwald Watergate humor columns called I Am Not a Crook. I digress.

The subject at hand is the movie Frost/Nixon. I didn't get to see Peter Morgan's stage play, so I can't attest to any major differences between the play and the movie but Howard's film more or less takes the form of a documentary, with the peripheral characters speaking directly to the camera about their thoughts and involvement in David Frost's landmark interviews with Nixon.

Whereas Howard's usual style tends to neither add nor subtract from a film, that actually serves the film well because when it's not a talking-head pseudodocumentary or a look behind the scenes, it is essentially a verbal duel.

Frank Langella doesn't really look or sound like Nixon but just like Anthony Hopkins in Oliver Stone's Nixon, his embodiment of the man finds the ex-president's essence that's more truthful than mere imitation.

Michael Sheen, who got overshadowed for his spot-on Tony Blair in The Queen, is similarly being downplayed for how good he is as David Frost in his younger, playboy days.

One other small role reveals an acting chameleon: Toby Jones who might as well have been Truman Capote in Infamous is just as convincing as the late superagent Irving "Swifty" Lazar" here.

I enjoyed Frost/Nixon a lot, but if you aren't a Watergate buff such as I am, you might not get the same charge. If you watched the original interviews and remember when Frost broke Nixon, you remember why the ex-president is a tragic figure. He did awful things. He broke the law. He betrayed the country and the Constitution, but he realized he did it and it haunted him. Nixon had demons and a soul, unlike our soon-to-be-ex-president who is so clueless he will never realize the damage he's left in his wake.

Comments:
I thought I'd like it very much, because, I, too, am a bit of a politics nut. Alas, I found it underwhelming on a few fronts, about which I am actually blogging right now (soon to join the hundreds of unfinished posts, I am sure). My main gripe was the talking-heads, which I thought were a massive creative misstep (This is Wire Tap?). At first, they're distracting. Then, later on in the film, they end up spelling out the subtext.

There were two excellent bits though: the parallel to the Iraq War during the first(?) interview, and the final scene between Frost and Nixon.

This is pretty faithful to the play as far as adaptations go. Onstage, they had two narrators (the Kevin Bacon and Sam Rockwell characters) addressing the audience as various intervals offering dueling commentary on the action - that's what they used for the talking heads stuff (and most of it was word-for-word). I think my reaction to the film is pretty much identical to my reaction to the stage version - I liked it, but with reservations. Nevertheless, Langella is still terrific, if understandably a bit more restrained (there being no balcony to project to), and consequently Sheen came across a bit stronger than he did before.

One thing I was curious about: I noticed that in the Broadway cast someone played Mike Wallace. What was that scene?

To tell the truth, I don't even remember Mike Wallace being in the stage version - he certainly wasn't a substantial part of it. I'm guessing his was one of the non-speaking roles - like Evonne Goolagong.

I'm very late to this party...but that description of your childhood re: Watergate. I woudn't quite call myself a political junkies, but I was holding up a tape recorder to the television set when Nixon resigned...and I had a collection of David Frye albums...and I read Art Buchwald every day...