"At the moment when Mary Pickford fainted, the Rev. Clarence Arthur Wilmot, down in the rectory of the Fourth Presbyterian Church at the corner of Straight Street and Broadway, felt the last particles of his faith leave him. The sensation was distinct — a visceral surrender, a set of dark sparkling bubbles escaping upward."
From In the Beauty of the Lilies by John Updike

By Edward Copeland
For a long time, a friend and I had an agreement: When the unfortunate day arrived that the great Pulitzer Prize-winning writer John Updike died, we would drop whatever we were doing and make a pilgrimage to his funeral to honor him. Sadly, my condition, a severed friendship and the evil practices of the trucking industry prevent that, but I can still at least pay tribute to the late, great man here.

I purchased my first John Updike novels when I was in the seventh grade. He'd just won his first Pulitzer Prize for Rabbit Is Rich so I bought the entire trilogy at once. Alas, even though I was slightly advanced for my age, I wasn't ready for the brilliant, 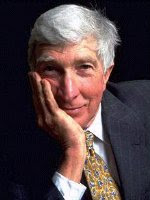 deep prose of Rabbit, Run yet, and I put the books aside. When I was a junior in high school and my English teacher told us to select a novel for a five paragraph essay, I wanted to do a John Irving, but she said no, calling him "a cheap knockoff of Kurt Vonnegut." I substituted The Witches of Eastwick, which I had purchased knowing a Jack Nicholson movie version was forthcoming (The movie and the book have very little to do with one another). It was a revelation as I was then ready for Updike. Every sentence, every paragraph was a wonder to behold. That summer, I had my wisdom teeth pulled, and as I recovered, read the Rabbit trilogy back to back. In a way, I think that's the best way to do it, because you can see Updike's gifts actually growing since they were written 10 years apart dating back to around 1960. The novels and the artist get better. Hungry for more, my friend Jennifer loaned me her copy of his short novel Of the Farm, a lovely little chamber piece and I was hooked and Updike held a permanent place as my favorite author that he still holds, though he eventually shared the title with Philip Roth.

This isn't to say that Updike was perfect. He was a much better writer than he was a novelist and I have to admit that there were some that I just didn't finish. However, they were few and the glorious ones way outnumbered them: A Month of Sundays, Couples, Marry Me and one of my very favorites, the undervalued In the Beauty of the Lilies. Of course, I can't forget that there was a great fourth Rabbit book, Rabbit at Rest, which won him a second Pulitzer Prize and many fine short stories, essays and works of criticism.

I even listened to him read some of his own novels on tape and after that I couldn't read anything by him without hearing his voice in my head. Because of frequent headaches, I can't read books as fast as I used to, so lying on my nightstand happens to be his final novel, The Widows of Eastwick. Somehow, it seems appropriate that my life with Updike starts and ends in Eastwick and there is a little comfort knowing that I have one novel left.

RIP Mr. Updike. I can't possibly add up the hours of joy you've given me over the years.

"Maybe the dead are gods, there's certainly something kind about them, the way they give you room. What you lose as you age is witnesses, the ones who watched from early on and cared, like your own little grandstand."
From Rabbit Is Rich

Comments:
We have lost a great writer. I had just selected his "Terrorist" from the big selection of his works at www.bookins.com, my favorite book and dvd-swapping site. I think I'll return and pick out a few more in tribute.

It's devastating news. And I just started reading Rabbit at Rest a few days ago and from the opening paragraph I was thinking 'I've missed Updike'. But at least he leaves behind plenty of novels for me to discover and revisit.

Hi Edward, I hadn't seen this. Thanks for pointing it out. I'm the biggest fan of his short stories and critical writing. I'm going to read U&I now--the hero worship feels appropriate at this time.