From the Vault: U and I by Nicholson Baker

For anyone who aspires to be a writer or who reads avidly, mutually inclusive attributes that they are, U and I is a must read.

Following Nicholson Baker's wonderful novels The Mezzanine and Room Temperature, Baker turns to autobiography, but it resembles no autobiography you're likely to have read for it concerns the "imagined friendship" Baker shares with John Updike, arguably America's best living prose stylist. 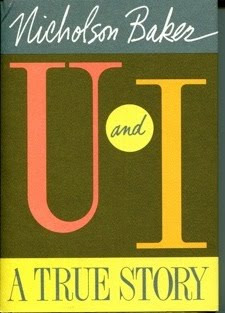 The entire book, which closely resembles an essay, explores the influence the words that people read have on their whole, a point made all the more ironic since Baker admits to having read only eight of Updike's books in their entirety.

U and I functions as both criticism and hero worship, showing Baker appalled both by Updike's description of a fictional wife and the fact that an author Baker knows personally gets to play golf with Updike instead of Baker himself. The most interesting aspect of the book, which overflows with interesting aspects, is Baker's idea that how and what we remember from the books we read are just as important as the book themselves and that when, as he does often, misquotes passages from Updike, the mistaken remembrance brings a resonance to the words that probably could not have been achieved any other way.

U and I provides a wonderfully neurotic exploration of the desire to live up to one's idols and, eventually, to surpass them. Baker is no John Updike, but then Updike is no Nicholson Baker and U and I should not only entertain but will give the reader a heightened awareness of Baker himself before one sets out to read his previous novels.