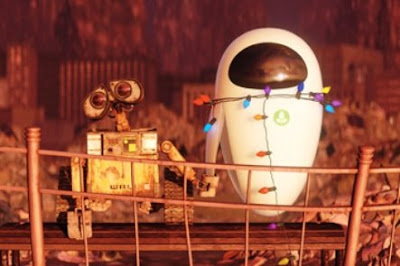 By Edward Copeland
Given my new circumstance of seeing films for the first time only on DVD, I wondered if something indeed was being lost. My favorite film that I'd seen in 2008 remained The Counterfeiters, the last film I saw in a theater. Even though I liked many films I saw on DVD, nothing wowed me. Nothing wowed me that is until I experienced the wonders of the glorious WALL-E.

I watched Andrew Stanton's Pixar production with awe almost from beginning to end (and I'd been planning to run this review today before the Los Angeles Film Critics crowned WALL-E the year's best Tuesday).

While I've enjoyed Pixar films, especially the early ones, it seemed to me that they slipped into formula as quickly as Disney's resurgence did following The Little Mermaid and Beauty and the Beast.

WALL-E from its very beginning seems as if it's a film from another time and another world, not a money-making Hollywood factory. If it weren't for the sound effects and score, it could almost be an animated silent film and the robot title character could be Buster Keaton.

With WALL-E and a cockroach seemingly the only moving inhabitants of a depopulated, trash-covered metropolitan city resembling New York, their world changes with the arrival of EVE, a high-tech probe. EVE is at first suspicious of the enthusiastic WALL-E but a sweet friendship/pseudoromance develops between the two machines.

When the film switches its setting to the ultimate vision of corporate consumerism: an interstellar cruise ship where the remainders of humanity never leave their lounge chairs and don't even try to walk, the movie becomes more dependent on story turns. Parts of the plot in this part of the film with an evil HAL 9000-like computer, complete with red eye and Wagner music cue, are easy to see coming, but director Stanton has infused WALL-E with so much magic and ballet-like grace by this time, that it hardly matters.

WALL-E did something that no other film has done for me this year: Make me want to watch it again as soon as I finished seeing it the first time.

Comments:
There are some really good foreign movies I have watched... esp. French.
There's also one which I have just watched recently. A Czechoslovakian one. If you haven't already seen it, I think it is worth checking out. May 'wow' you..???
http://milkywaykid.blogspot.com/2008/12/little-otik.html