A curious case of a movie adaptation By Edward Copeland
It doesn't happen often, but it happens. I see a film and when it's over, no opinion has formed. No form of positive adulation. No form of negative nitpicking. Not even a mood of middling indifference or having wasted time. This is how I felt after seeing The Curious Case of Benjamin Button for the first time, but I believed that the film deserved a second look and further deliberation before I wrote anything about it.

So I watched it a second time and nearly the same thing happened. The imagery, especially the wondrous cinematography of Claudio Miranda, kept me enthralled and once again I thought director David Fincher managed to get a performance out of Brad Pitt at a level of excellence that other directors fail to achieve. As for the film itself, it still left me cold. I turned to that handy-dandy Internet and found the original F. Scott Fitzgerald short story to see if that would offer me any guidance and the answers began to become clearer.

The Curious Case of Benjamin Button by F. Scott Fitzgerald is nearly devoid of sentiment and falls closer to satire. Since Fincher made one of the best satires of recent times with Pitt in Fight Club, I wondered why the softer approach was taken. Reading the story also

made clear a flaw in the film's own logic. In the story, Benjamin is born as a full-grown old man, complete with beard and the ability to speak. In the film version, he's born as an old baby and as he grows younger, he shrinks back to an infant. That made sense in the story, but in the movie's logic, Benjamin should have ended up as an adult-size baby. I don't know why they chose not to do it the other way, they still could have ended up with the touching ending. Dropping some of the other aspects of the short story were wise choices as his father (who didn't abandon him in Fitzgerald's version) attempted to raise him as age specific despite his appearance, sending the old man to grade school, etc., and that could have tread dangerously close to material similar to that mawkish Robin Williams vehicle Jack. The adaptation was by Eric Roth and I feel somewhat bad leveling any criticism his way since the screenwriter has lost all his money in the Bernie Madoff scam, but I wonder if they tried to force Benjamin Button on to the Forrest Gump template.

Now, I was not one of the Gump haters, who mocked its sentimentality and felt it was some subversive conservative agitprop. I enjoyed it, particularly its satire, but when I read Winston Groom's original novel after seeing the film, I was surprised to see the differences in the Forrest of the page and the Forrest of the screen much in the way I was by the two Benjamins.

In print, both were more prickly and in Gump's case, a bit profane. Neither were wide-eyed innocents that you couldn't help but love. Fitzgerald's Benjamin was born a full-size rascal but Roth's version has had his edges smoothed away. At least in the case of Forrest Gump 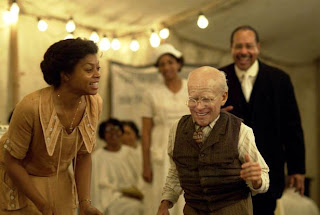 the movie, there were plenty of interesting supporting characters to help give the film life. (Even the casual viewer has to spot the Lt. Dan/Captain Mike similarities.) Aside from the depth Taraji P. Henson brings to Queenie, no one else gets much to do in Benjamin Button, including Cate Blanchett. I don't know why so much surprise has been expressed at her absence from the year end awards derby because as talented as Blanchett is, her role here tilts dangerously close to merely being a plot point. I never felt the romance between her character and Pitt's. Still, I found a lot to admire within the film. As I mentioned before, it is a beautiful looking film and Fincher not only gets one of Pitt's best performances out of him, he also keeps the momentum moving, even if the temperature is below freezing. What's saddest about The Curious Case of Benjamin Button is what I know is going to inevitably happen (and has already started). It is destined to be overpraised and overattacked with very few standing in the middle, where my opinion at least ended up landing.

Comments:
The logic police has gone a little haywire...remind me never to watch The Wizard of Oz when you're around.

I think it's fine to apply a tough standard of logic to certain kinds of films - for example, something like Babel, which is clearly intended as total realism and is filmed in a cinema verite style. There, I think it's appropriate to point out inconsistencies (and there were a shitload of them). But Benjamin Button is based on such a fantastical premise that I think you have to throw those rules out the window - it's like pointing out the gaps in logic in a Harry Potter film.

There was no other way the filmmakers could have done it, and here's why: if they started out with an adult-sized Benjamin, the audience would have laughed hysterically ("Gee, no wonder she died in childbirth.") I think if they'd done it that way, you'd be pointing out the total ilogicality of a woman carrying her in womb something almost equal to her own body mass. They don't make maternity clothes in those sizes.

If they'd kept the beginning the way it is, and ended with an adult-size baby, (a) that's just creepy, and (b), again, I think the audience would howl. Again, it is a fantasy-based premise, and so far-fetched to begin with, that quibbling about those things seems a bit nitpicky. As far as Benjamin's size is concerned, at birth and at death, I think they did it the only way that made sense within the fabric of the story they were telling - and because it wasn't a realistic story to begin with, they did it without sacrificing anything in terms of credibility.

I actually liked the film a lot, although I do think it could have stood a bit of trimming - particularly in the midsection (and though Blanchett is one of the most naturally talented actresses working today, her recent performances continue to bother me, for a variety of different reasons). I think the film is at its best when the title character is a yong man trapped in an older man's body, or at the end when he's an old man trapped in a younger body - when the outside and inside match up, the film becomes a rather conventional love story, and loses some of its novelty and lyricism. I understand why people compare the film to Gump, in terms of way the storyline is shaped - for my part, I found Gump condescending in most of attitudes, and pretty obvious in its efforts to tug at the heartstrings - there was almost as much button-pushing going on as in Steel Magnolias. I think Button is one of those films that definitely plays better on the big screen - it has the sweep and proportions of an epic. I agree with you about Pitt's performance, though - I don't know if it's great acting or not, but it is a great movie star performance - and by extension, an iconic one (there are moments when he gives of the same kind of mythical glow that Alan Ladd did in Shane).

On a sidenote, is Taraji B. Henson the most underrated actress working in films today? I'm beginning to think so.

While I agree that it could have come off as silly, in addition to following the film's own logic, it could have made the film about a person who was not only aging backwards but was literally receding from existence as well.

I think it accomplished, without being too literal-minded about it. And no matter how I look at it, I don't think there was any way to start Benjamin off at adult proportions without it coming off as silly.

It was a well accomplished movie, very graphic and well done.Making the characters look old was the best since the 80's.

Cate Blanchett with a southern accent FTW; but it kept dragging on, always pausing dramatically on Brad Pitt's face, a lot like Meet Joe Black

Dull, empty, derivative, self-important waffle, with barely a shred of Gump's sense-of-humour; where did those three hours of my life go?

and why do film-makers insist on encasing younger actors in grotesquely unconvincing old-age make-up rather than casting an older actor? At least this is one thing that Cameron got right in Titanic...I thought Blanchett was awful and unsympathetic, Pitt was an uninteresting blank page - grrr, what a nothing movie this was; it annoys me just thinking about it!

(and Josh, I saw it on the big screen, and couldn't wait to leave-and of course I disagree that Babel was intended as total realism, but you knew that!)