Baby, if you ever wondered... 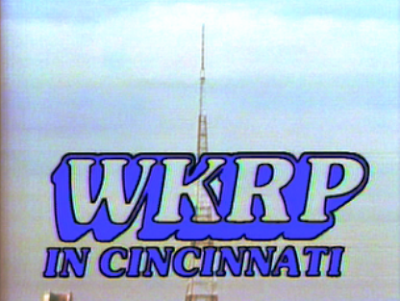 By Edward Copeland
whatever became of WKRP in Cincinnati, it finally has returned, at least Season 1, with its long overdue debut on DVD. Since its original run, it has sporadically appeared in syndication and had a "don't blink or you'll miss it" run on TVLand several years ago, but now the first season is finally available to all, albeit it in an altered form (See post below).

Still, even with the absence of original music, it is good to see the gang again and to remember that in many respects, if WKRP didn't have a laughtrack, you could almost call this one of television's first dramedies. I'd forgotten how many serious stories and issues were sprinkled between the laughs. This wasn't an issue show the way All in the Family was, but it definitely wasn't your standard sitcom where "very special episodes" were exceptions, not rules. 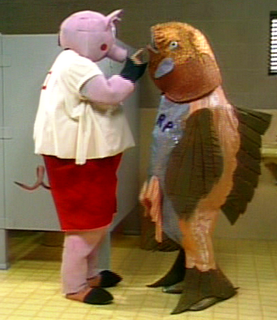 In fact, in a short extra in the DVD set, creator Hugh Wilson recounts how the classic episode "A Fish Story" came about because of the network's insistence that they do a more standard joke-joke-joke episode, so he really piled it on, but it backfired on him because it turned out to be one of the series' highest-rated and most revered episodes. Wilson also mentions in a commentary track about how much he annoys his children when they watch sitcoms such as Friends together because he can always guess the punchline before it's spoken because of the predictable, formulaic rhythm. You couldn't call WKRP formula — it's comedy stemming from character, not jokes. For those who have forgotten (or never seen) "A Fish Story," it tells the story of Andy (Gary Sandy) and Carlson (Gordon Jump) hoping to get a positive profile about the station's format change by agreeing to an interview with a magazine reporter. Of course, it coincides with a day when Herb (Frank Bonner) dresses as a 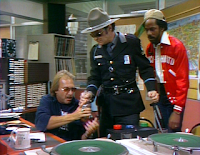 giant carp (designed to be the station's mascot) and gets in a brawl with the mascot for rival station WPIG (Lee Bergere) in a public bathroom, getting Les and Bailey (Richard Sanders, Jan Smithers) involved in the melee as well. Meanwhile, back at the station, the lobby is being repainted by a worker who spends more time coming on to Jennifer (Loni Anderson) than doing his job and Johnny and Venus (Howard Hesseman, Tim Reid) take part in an on-air experiment to show the effects of alcohol on a person's timing, conducted by a stoic state trooper (Jerry Hardin), who is beside himself to see that Johnny's reaction time gets better the more he drinks. For me, the episode is one of WKRP's most sustained exercises in hilarity, even rivaling the infamous "Turkeys Away" show, which also aired in season one. 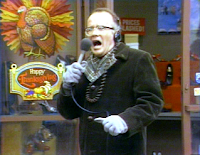 That episode, which contained Les' priceless Hindenburg-like description of the Thanksgiving publicity stunt gone awry, ("The turkeys are crashing to the ground like sacks of wet cement!") and his later report to his co-workers when he returns to the station that things "got pretty weird after that" and that it appeared that the surviving turkeys, once the helicopter landed, were mounting a counterattack ("almost like they were organized"). Of course, it all led to one of the most classic closing lines in the history of television as Carlson tells his staff, "As God is my witness, I thought turkeys could fly." As unbelievable as it may sound, Wilson says on the commentary track for the "Turkeys Away" episode that the story was based on actual incident that occurred at a real radio station that he'd heard about and knew would make a memorable installment. 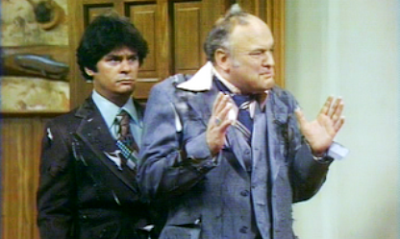 Much of the first season mixed the laughs with more serious matters, such as when Les goes out on a ledge, prepared to commit suicide when he's banned from a baseball team's locker room because a player thinks he's gay. A tornado even hits the area, injuring Andy and slowing the show down as Carlson talks to a frightened child on the phone. There also were episodes involving marital separations, abandoned babies and the revelation that Venus really was an Army deserter in hiding. Later seasons would with Soviet defectors (making use of Elton John's "Tiny Dancer" long before Almost Famous), censorship, late-in-life pregnancy, Johnny believing that God is speaking to him, the aftermath of The Who concert where fans were trampled to death, alcoholism, heart problems and even saving troubled youth by teaching them about the atom. 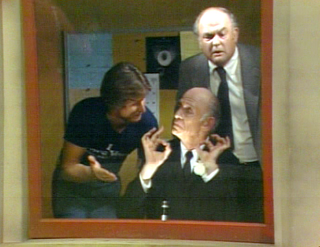 Aside from the sharp writing, the key to WKRP's success was its sparkling cast, most of whom never really got to shine in such a way again. Where have Gary Sandy or Jan Smithers gone? Most of what you've heard about Loni Anderson involved her marriage and divorce from Burt Reynolds. Howard Hesseman still works fairly regularly, though most of the time it's hard to see Dr. Johnny Fever anywhere in there. Tim Reid has had some post-WKRP success. Frank Bonner has turned mostly to directing. Richard Sanders has seemed to have vanished from sight. One thing I didn't remember until re-watching Season 1 was that not only did Sanders create a character for the ages in Les Nessman, he also had a hand in writing five episodes, including the memorable "Commercial Break" episode from season 1 where they devise a jingle to help a funeral home chain sell their product to a younger generation. The late Gordon Jump later found a following as the Maytag repairman. The less we acknowledge the existence of The New WKRP in Cincinnati that ran for a couple of years in syndication, the better.

There also were some fine recurring performers, notably writer Bill Dial as station engineer and strong union man Bucky, who only appeared in the "Hold-Up" episode of Season 1, and the great Carol Bruce as Mama Carlson. In the pilot, legendary actress Sylvia Sidney played Mama and, according to the commentary track by Hugh Wilson, she was a pain to work with, but that's a good thing, because Bruce's appearances as Mama Carlson provided the series with some of its best moments. Of all its characters, Hesseman's Johnny Fever still looms largest. What could have been a one-note portrayal of a burnout, possibly drug-addled DJ took on added depth in multiple episodes and Hesseman's exquisite timing, both comic and dramatic, made Johnny a television character for the ages. One other thing I'd forgotten: the original opening of the early episodes with a hand turning the dial on a car radio ("While the senator denied he was intoxicated, he could not explain his nudity"). It's a shame that the episodes aren't exactly the way we remember them, but mostly WKRP is better than no WKRP at all.

Comments:
This recap of "A Fish Story" rocked. I remember all those moments, but had no idea they were all in the same episode!

Whether you know it or not, this piece basically negates the previous piece -- WKRP rocks even when it isn't allowed to rock and roll.

(And props to Hesseman for never exploiting Johnny Fever over the long haul. That would've been sad.)

This is the same reason The Wonder Years may never arrive on DVD. I imagine the rights for "A Little Help From My Friends" on the opening credits is no small chunk of change.

p.s. I'm proud to say that Howard Hesseman is the lone famous alumnus from my high school (Silverton, Ore.)