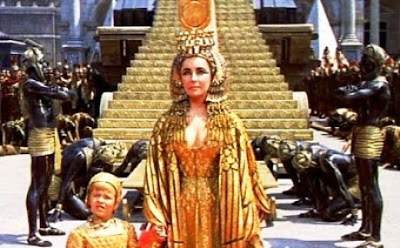 By Edward Copeland
As HBO's Rome neared its end, I decided it was finally time to catch up with two Oscar-nominated best pictures that covered some of the same material: 1934's Cleopatra by Cecil B. DeMille and starring Claudette Colbert and the infamous 1963 Cleopatra directed by Joseph L. Mankiewicz but best known for its excess and for bringing together Elizabeth Taylor and Richard Burton. I figured I'd assess the three versions of the story and the various Cleos, Antonys, Caesars and Octavians. 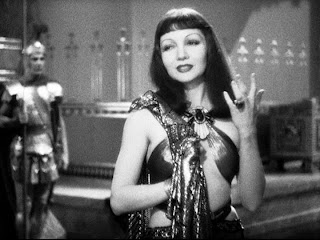 Now that I've finished the three versions of the story, the thing that strikes me is how many of the same points are hit. There are embellishments and differences to be sure (and not being a Roman historian, I won't dare venture a guess as to which is the most accurate), but by and large the broad strokes are remarkably consistent. I actually watched DeMille's Cleopatra before Rome got Antony back to Egypt for its finale. The 1934 Cleopatra remains fairly watchable, despite some stiff acting from just about every member of the cast except Colbert. She had quite a 1934, winning her Oscar for It Happened One Night, giving a completely different performance here and taking the lead in the soaper Imitation of Life, which for my money is less dated than the 1959 Lana Turner version. One thing true in both the 1934 and 1963 versions is that the films are stronger when they focus on Caesar and Cleopatra versus Antony and Cleopatra. 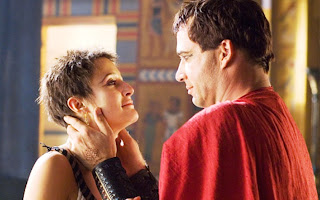 The opposite was true of HBO's Rome, which I think actually had a stronger second season than a first, where the Caesar/Cleo chapter seemed somewhat perfunctory, but the Antony/Cleo segments sizzled, though James Purefoy's great work as Antony overshadowed Lyndsey Marshal's as Cleopatra. Purefoy was superb throughout the series' run, but he really soared once the tough schemer became literally unhinged by his obsession with the Egyptian queen. His performance so bests Henry Wilcoxon's in 1934 and Richard Burton's in 1963 that it isn't even close. 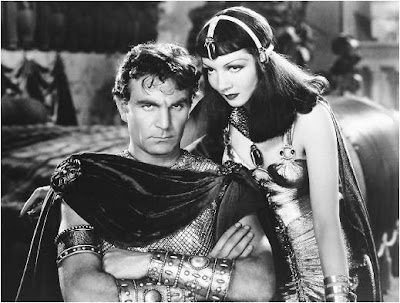 Overall, DeMille's version remains quite watchable, thanks mainly to Colbert. There is a fair bit of spectacle even by 1934 standards, but Colbert holds the thing together. Other than her co-stars who seem to be suffering from rigor mortis, the film holds up as well as can be expected. The plot points are the ones you always hear: Seduce Caesar, bear his child, he gets whacked, Antony shows up, falls under her spell, Octavian tries to deal with her to betray Antony and instead she chooses to die with him thanks to an asp.

One thing that fascinates me among the three works are the world of differences in how Octavian is portrayed. In the 1934 version, Ian Keith is actually older than Wilcoxon who plays Antony and only five years younger than Warren William who plays Caesar. Roddy McDowall gets to play a fey version of Caesar's heir when he was in his early 30s in 1963's version, only three years younger than Burton was at the time. Rome actually went to the trouble of having two actors play Octavian. Max Pirkis, born in 1989, played the young Octavian through the time of Caesar until his death. His later years were played by Simon Woods, whose age is not given but would appear to also be in his 20s. According to the references I can find, the real Octavian was 18 when Caesar was assassinated and 32 when he bested Antony. 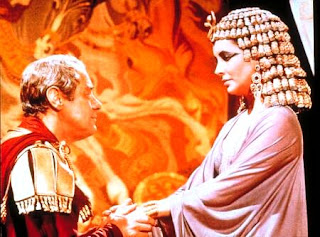 Which brings us to 1963's version. Known perhaps more by its reputation than by anyone who has actually sat through all four hours of it, I finally got through it. For the first half, it's watchable enough, as best actor nominee Rex Harrison gives us a very British Julius Caesar (but then again, they almost always end up being British). Elizabeth Taylor, on the other hand, must have been too busy with her insane amount of costume changes to actually mount a credible performance. Taylor can be good, but she's pretty bad here. Still, it moves along OK — until Caesar gets knifed. When the film resumes after intermission with the focus on the Antony/Cleopatra affair, it seems as if the entire film has been produced for camp purposes only. It dives from modestly mediocre into the depths of the downright awful with Burton turning in one of his worst performances as well. One difference between this version and the ones in 1934 and on Rome is that it says that Antony and Cleopatra's affair precedes Antony's forced marriage to Octavian's sister. I'll grant the 1963 version this much, as far as spectacles go, it's impressive.

In the end, I think the depiction of the events on Rome prove the most compelling, even with their sprinkling of fictional characters interacting with the real ones. Perhaps with a soap opera-type historical story such as this with war, romance, betrayals and the like, a serialized format really would be the best way to go. The two hours of the 1934 version truncates too much and the four hours of the 1963 version (itself brutally cut) is too much for one setting. This story really does work best told an hour at a time and though I did grow fairly fond of Rome, I think the ended the series at exactly the right moment in time. 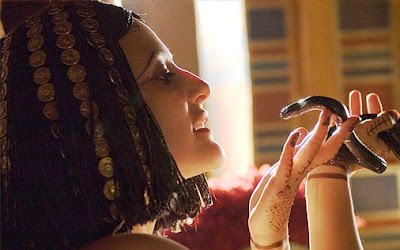 Comments:
What's great about DeMille's version is his sheer showmanship as a director. How about that camera shot that pulls back to reveal Cleo's fab barge? The parade scene into Rome? It would cost $200 million to make that movie today, and it wouldn't be half as good.

Yes, the John Stahl "Imitation of Life" with Colbert is less dated than Sirk's remake, but the operatic quality of the Sirk still fascinates. I recently set myself the Cleo challenge, and found that what tripped up the 1963 Cleo was the indigestible (if eloquent) hunks of dialogue that Mankiewicz gave his characetrs. If Harrison is the best at handling it, it's because he seems to cut the lines down to digestible bites. While watching the '63 Cleo I was reminded of what another Harrison (Mr. Ford) reputedly said to George Lucas, "Man, you can write this stuff but you sure can't say it."