By Josh R
OK, you theater nerds — I know there at least two of you out there — here’s a list of what I judged to be the best productions & performances of 2006. I have considered only productions which premiered in the calendar year of 2006, which encompasses parts of two seasons. I wish I'd been able to see Coast of Utopia and The Little Dog Laughed before making this list...but they're both still running, so it gives me something to look forward to in 2007.

The brilliance of the current Broadway revival of the 1970 Sondheim musical, directed with bracing clarity by John Doyle, is that it not only minimizes the show’s inherent flaws, but succeeds in making them incidental to the point of irrelevance. This is Company deconstructed, re-imagined, and enthrallingly revitalized before our very eyes — all this while remaining fairly faithful to the original text, which now re-emerges through the fog of previous productions with a startling sense of urgency. As Bobby, Raul Esparza invests the role with such depth of feeling that it blows the lid off whatever you thought you knew about the superficially charming child-man torn between playing it safe and Being Alive. For a full review, click here.

What really distinguishes Michael Greif’s production of the Scott Frankel-Michael Korie musical based on the cult documentary by the Maysles Brothers is the performance of Christine Ebersole, giving twin tour-de-forces in two very different roles which collectively give full expression to the broad spectrum of her talents. The genius of Ebersole’s work lies in her ability to navigate the extremes of both characters — she can be side-splittingly funny in one moment and heartbreaking in the next, without missing a beat. If there’s a style of song that the actress can’t sing, the creators of this show haven’t found it. Emotionally as well as vocally, she runs the gamut, and it’s spectacular to behold. For a full review, click here. 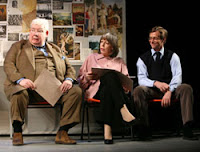 The effect of play is depressingly diluted in its static, truncated film adaptation, but no amount of disappointment engendered by the cinematic incarnation can diminish the memory of Nicholas Hytner’s celebrated staging, which took Broadway by storm this past spring. Alan Bennett’s play uses the basic premise of a teacher inspiring his pupils as a jumping off place to tackle some thorny and provocative issues about the modern cultural approach to learning, and the way that institutional education can be damaging to those who seek to gain from it. A top-notch production, with an impeccable gallery of performances.

4. THE LIEUTENANT OF INISHMORE

A brickbat pitched squarely in the direction of the reigning powers-that-be and their disciples, Martin McDonagh’s brilliantly constructed, deliciously twisted take on the senselessness of terrorism exposes (and holds up for ridicule) the sheer lunacy of warfare fought on an ideological basis...and given the amount of gleefully gory bloodletting that occurs onstage, it is doubtless one of the most outrageous spectacles ever presented on a Broadway stage. Given an amazingly kinetic production by Wilson Milam, I suspect that even the most of squeamish playgoers were surprised to find themselves laughing along with the catalog of horrors on display.

The rarest of all things to come by — a new work of musical theater which feels fresh, passionate, and unequivocally alive. Adapted from a century-old play about the sexual repression of teenagers and outfitted with a kinetic, pulsating rock/pop score, Duncan Sheik and Stephen Sater have created a brash, bold work of theatrical showmanship which provides Broadway with a welcome jolt of energy. The well-selected ensemble is comprised of vastly talented youngsters who look and sound unconventional by Broadway’s standards — forget about the air-brushed faces and voices of most Broadway ensembles — but bring fierce, passionate conviction to their roles and serve the demands of the score beautifully. For a full review, click here.

Never take a legend for granted — well into her third decade as a star, the remarkable Ms. Streep achieved a new career high-water mark with two wildly different, and equally stunning performances. While she delighted as an haute-couture bitch-on-wheels in The Devil Wears Prada, she was no less of a wonder to behold as Bertolt Brecht’s wily war profiteer in George C. Wolfe’s gale-force of a revival for the Public Theater. There may not have been a more startling rendition of any song to be performed on the boards in 2006 than Ms. Streep’s galvanizing, seething enactment of “The Song of the Great Capitulation,” a harrowing glimpse into the mindset of a woman made bitter and grasping by years of bending to the will of others in order to survive. Audiences waited overnight in Central Park to catch of glimpse of the genius in action ... and the genius didn’t disappoint.

Nearly everything about the Kathleen Marshall’s spiffy revival confounded expectations, given that the 1955 Adler & Ross musical is the kind of sappy, precious material that really has no business working in a contemporary context. Never underestimate what a great chef can do with day-old bread…the director-choreographer’s crackerjack production succeeded in making the show seem less trite and coy than it actually is, while still managing to stay absolutely true to the spirit of source material. Marshall's spiffy dance routines were dazzlingly staged and executed, while lead actors Harry Connick Jr. and Kelli O’Hara (as would-be lovers butting heads over union politics) achieved a smart, sexy chemistry, striking just the right balance between sophistication and playfulness.

Ghosties, ghoulies and things that go bump in the night made for a spellbinding evening of theater in Conor McPherson’s quietly shattering new play, produced by The Roundabout Theatre Company. There are no paranormal activities on display (at least, not until an indelible twist at the end), no levitating figures, moving staircases, ominous shadows or the dragging of chains — the terror manifests itself in those frightening corners of one’s consciousness where spectral visitors can be sensed, rather than seen and heard. The characters are haunted by demons of the sort that no one else can see – those born of their own guilt and shame — and it’s no accident that the entire play unfolds in a psychologist’s office. The idea of “psychological demons” may not be exactly new, but the way the metaphor is made literal, as blistering self-reproach takes physical form, is stunningly actualized by the playwright and impeccably performed by a brilliant cast.

As a mother grieving over the loss of a child, the luminous Ms. Nixon brought emotional credibility to a play that might otherwise have gotten bogged down in maudlin, movie-of-the-week style dramaturgy. With the same consummate skill that she brought to her six memorable seasons on Sex and the City, the actress delivered an eloquent, astutely measured account of the manner in which emotional forbearance serves as a buffer against the unbearable sense of bewilderment that comes in trying to make sense of tragedy. Rather than resorting to histrionics, Nixon registered all the pain of her character’s acknowledgement of her suffering with delicate, nuanced strokes — in a performance that was all the more powerful for what remained unsaid.

Instead of operating under the pretense that the state of contemporary musicals is right as rain, this unabashedly silly Canadian import emphatically and hilariously insists that the celebrated hit of today doesn’t even stack up to yesterday’s mediocrity. A middle-age musical theater buff holds court from his cluttered studio apartment, extolling the virtues of his favorite 1920s musical — the kind of frothy, featherweight concoction that was Broadway’s stock-in-trade during the era of Ziegfeld pastiche — which comes to life before our very eyes. While I’m always slightly skeptical of shows built around a gimmick, the witty conceit that provides the basis of The Drowsy Chaperone proves disarmingly effective — especially when it allows for riotously funny bits of slapstick parody, gleefully enacted by a game and talented cast.

Don't miss any of them ON BROADWAY.

As for Part 1 of Coast of Utopia winning Best Play, what I suspect will happen is that the entire trilogy will grouped together into a single nomination. There is precedent - Nicholas Nickleby won Best Play in 1982 for the entirety of its text, despite actually being two plays performed separately. Since the two halves of Angels in America premiered in different seasons, the Nickleby precedent wasn't applicable - here it would be, assuming the nominating committee accepts the argument that all three installments are part of the same play, rather than three separate and distinct entities.