Not ready to win documentary feature 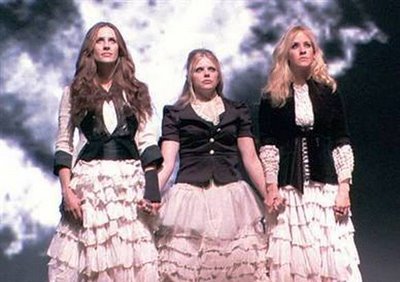 By Edward Copeland
Let me be clear upfront: I love the Dixie Chicks, both for their music and for what they said. Despite the pedigree of being co-directed by acclaimed documentarian Barbara Kopple, I can't truly say that Shut Up & Sing deserves its spot on the Academy shortlist when superior documentaries such as Anytown USA and Who Killed the Electric Car? missed the cut.

This isn't to say that Shut Up & Sing is bad, it's just that as a film and as a documentary, it really doesn't offer much that anyone who has followed the chronicles of the musical group following a comment by lead singer Natalie Maines prior to the Iraq invasion didn't already know (Unless getting to follow the fertility problems of her bandmates Emily Robison and Martie Maguire count). In case you missed it (and how could you?), during a London concert in 2003 before the Iraq war began, Maines said she was ashamed that President Bush also came from her home state of Texas, which is really an understatement since all Americans should be ashamed he came from our country, not just a single state.

The documentary doesn't really tell us anything we didn't already know, doesn't provide insights to any corporate collusion to stamp out the Chicks' music following the comment or let us in on any details that hadn't already been widely reported. The people who react with anger at Maines already had proved their ignorance, and seeing them again doesn't add much to the story — though seeing one outraged fan accusing them of supporting communism does explain how 27% of Americans still think that somehow Dubya is doing a good job in Iraq. There is one ironic moment in the movie when their manager Simon Renshaw immediately after the comment advises them that Dubya is at the peak of his popularity and predicts that in a matter of weeks he'd be more popular and Saddam would be dead or captured.

If nothing else, time has proved the Dixie Chicks right in opposing the war prior to its start and turned their music in a new direction with a new fanbase. Country music may have rejected the Dixie Chicks, but the country as a whole has rejected Dubya and the war in far greater numbers. Shut Up & Sing is watchable enough, but it's really preaching to the converted and doesn't stand as a superior documentary.