Anytown USA — from the port side 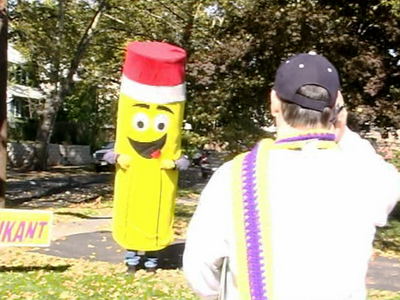 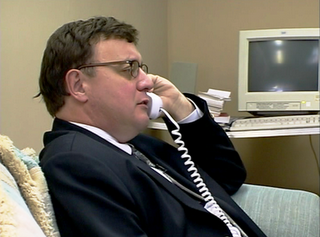 By Edward Copeland
Actually, the title of this post (which chose nautical terms to avoid sounding like annoying cable news shoutfests) is a bit of a misnomer for two reasons: 1) I'm more a moderate than a doctrinaire lefty (not that Dubya hasn't been doing his best to push me that direction) and 2) This great documentary, Anytown USA, while about a 2003 New Jersey mayoral race where the candidates are identified by party really doesn't have a lot to do with partisan politics in the way national partisan politics are identified. Directed by Kristian Fraga, Anytown USA explores a contentious mayoral election in the town of Bogota, N.J., where the GOP incumbent, the legally blind Steve Lonegan, seems reviled by most of the town for his determination to send the town's high school into another school district which could result in the death of the town's high school football team.

The documentary has been making the festival rounds for quite some time and played a week in Los Angeles earlier this year, making it eligible for the Academy Award for documentary feature. Hopefully, it will be on the short list announced by the Academy later this month — because it certainly deserves it. 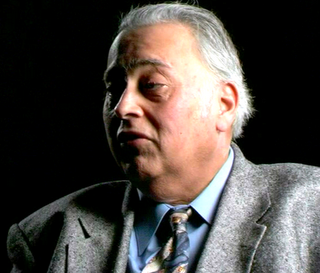 Enlisted to try to bounce Lonegan from office is Democrat Fred Pesce, who seems truly less than enthusiastic about joining the race. The candidates let the filmmakers' cameras seemingly watch them everywhere and whether it's due to them forgetting that the cameras were there or the prevalence of reality television programming where being seen as manipulative and villainous can prove to be assets, the camera captures them, warts and all. It is especially amazing in the case of Lonegan, who comes off as a true prick — and doesn't seem to mind. This would probably have made for a fairly interesting film alone, but while the filmmakers were in Bogota assembling their film, a wrench was thrown into the tale in the form of Dave Musikant, who decides to launch an independent write-in candidacy for the office. In a great irony, Musikant, who suffered from a brain tumor, also is legally blind (insert your own blind-leading-the-blind joke here). 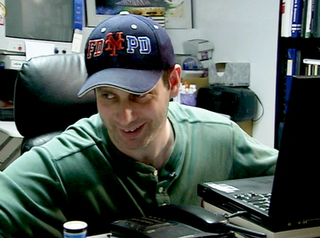 Musikant's enthusiasm is almost infectious, even when it doesn't seem clear exactly what his issues are other than being anti-Lonegan. Being anti-something may be enough to help the Democrats take back power today, but in this tiny N.J. microcosm in 2003, it probably would help to be for something as well. The documentary also is great at showing how politics almost can work as a virus as you watch the likable Musikant start to play the game as any normal pol would. Part of the joys of this film is watching it unfold, uncertain of the outcome, so I'm going to avoid much further detail of what happens in the film and what the election's outcome was. However, Fraga, producer Juan Dominguez and the rest of the crew associated with this documentary have created a truly mesmerizing film. It generates more suspense that many fiction films, more laughs that a lot of comedies. If I have any criticisms of the film, they are minor ones. I for one, living in a state where write-in votes are illegal, would have liked to have seen the actual mechanics of casting a write-in ballot, since we see people going behind the curtain of the old-fashioned lever voting machines but don't see how people who vote for Musikant actually do it.

As you head to the polls this Election Day (hopefully knowing what the hell you are doing, otherwise — stay home), Anytown USA might make for a nice palate cleanser before the actual election results roll in. It is readily available on DVD for both rental and sale and includes an illuminating commentary by Fraga and our good friend Matt Zoller Seitz. Give Anytown USA — fans of documentaries and politics shouldn't be disappointed and good luck to the filmmakers. Let's hope they make that Academy short list later this month.

To read a take on the film from the conservative side of things, click here for Wagstaff's take.

Comments:
I hope it does get an Oscar nod. There are many things I loved about it, not least is the crazy irony of having 2 blind but driven men, and 1 sighted but lethargic man, all running against each other. Thinking about that is like considering a mystery that God himself put in place. There are great sequences too, like the battle of the lawn signs, as well as several quick moments that are funny and insightful, such as the way Pesce leaves the voting booth looking like he just had a good b.m.