A helluva good age to be

By Edward Copeland
Of all the films on my various best lists over the years, The Graduate seems to be the one that moves the most. Sometimes, I don't like it as much as others, but on my most recent viewing, everything I loved was present and accounted for on this, the 40th anniversary of its release.

It's worth noting that The Graduate, which won Mike Nichols the Oscar for best director of 1967, marks its anniversary on the same day as Nichols' latest film, Charlie Wilson's War, opens. Watching The Graduate again, you remember the techniques Nichols employed that now seem old hat, but were quite unusual in its day. (In a bit of completely extraneous Oscar trivia, with the recent passing of director Delbert Mann, Nichols now holds the title of the earliest Oscar-winning director still living.)

Nichols' use of various closeups and points-of-view were quite remarkable for their time. Right from the film's opening, close on the face of Benjamin Braddock (Dustin Hoffman) as he sits on the plane, beginning his descent not only to the airport, but to the uncertainty of what will happen with the rest of his life. He's helpless, riding along the moving sidewalk, just the way his suitcase travels down the baggage chute. On my latest viewing, I'd forgotten one of my favorite shots when Benjamin attempts to beat Mrs. Robinson (Anne Bancroft) to the punch of telling her daughter Elaine (Katharine Ross) about their affair by telling Elaine herself. Elaine erupts, as expected, and as Mrs. Robinson says, "Goodbye Benjamin," the camera pulls back from a closeup of Bancroft to show her literally in a corner.

The opening airport sequence also illustrates how vital the now legendary songs of Simon & Garfunkel were to the whole movie. The Academy of Motion Pictures Arts & Sciences' list of travesties is a long and illustrious one, but the failure to nominate ANY of the songs from The Graduate still boggles the mind. I suppose the music branch was hearing without listening. (To make the outrage even worse, the Oscar for best song in 1967 went to "Talk to the Animals" from Doctor Doolittle, perhaps the worst film ever nominated for best picture.)

Try to imagine the sequence where Ben is racing to find the church where Elaine is going to get married without hearing "Mrs. Robinson" in your mind, sputtering out just as his engine does. Just as pivotal to the film's success as the songs and Nichols' direction are the performances. Hoffman burst on to the scene with this film for a good reason, even if he is playing 10 years younger than he really was (The great William Daniels who plays Ben's father was only 10 years older than Hoffman.) Hoffman is hysterical as the recent college grad (who for some reason, hasn't turned 21 yet though he was away for four years) who feels alienated by everyone and everything at the same time he just acquiesces to any adult's wishes. His entire affair with Mrs. Robinson seems to start out of boredom more than anything else, even though Ben insists that of all his parents' friends, he always thought Mrs. Robinson was the most attractive. 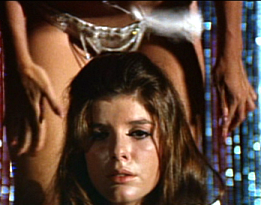 When he's forced to take Mrs. Robinson's daughter Elaine out on a date, he purposely tries to be aloof, taking her to a strip club (unlike Travis Bickle who dragged Cybill Shepherd to a porno in Taxi Driver, Ben knows what he's doing is mean). Ross' face as the stripper twirls her tassles over her head is heartbreaking and it breaks Ben as well, who tries to explain that he just has this compulsion that he needs to be rude to everyone. Of course, Ben falls for Elaine, telling her that she's the only person he can stand to be around (after one forced date mind you) and that he feels as if his whole life is a waste and the rules are being made by the wrong people. When he suddenly decides after Elaine has turned on him over the affair (made worse by her mother's lies), that he's going to marry Elaine, his parents are initially excited until they realize he hasn't let Elaine in on the plan. His father rightfully thinks his plan sounds half-baked, but Ben insists, "It's completely baked." 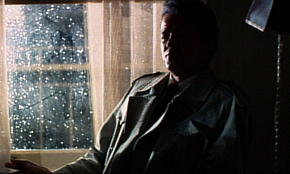 In addition to the aforementioned Daniels, The Graduate is chock full of great character actors in role large and small such as Buck Henry (who co-wrote the screenplay with Calder Willingham) as a hotel clerk, Murray Hamilton as the cuckolded Mr. Robinson and Elizabeth Wilson as Ben's mother. Look quick for early work by Mike Farrell (as a hotel bellhop) and Richard Dreyfuss (as a tenant in Ben's boarding house in Berkeley). For TV fans, you can see Norman Fell tests the waters as a landlord in his pre-Mr. Roper days and for Bewitched fans, a priceless chance to see Aunt Clara 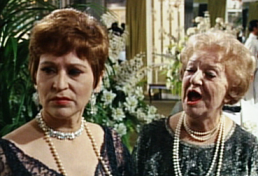 (Marion Lorne) and Esmeralda (Alice Ghostley) share the same frame. Then there is Mrs. Robinson, what may well be Bancroft's most famous role. I go back and forth on whether she should really have been considered a lead here (after the first hour, she only has three scenes, albeit great ones), but whether she is lead or supporting, she is great. Even in her first appearance, nearly hidden in the crowd at Ben's graduation party, she leans in and makes her presence known. Bancroft's timing of just about everything is exquisite. I particularly love Ben's rushed kiss before she has a chance to exhale her cigarette smoke. The Graduate, while definitely a product of its time period, also proved to be a template for many films, both good and bad. Even though Ben is in his 20s, you could say this created the blueprint for most teen sex comedies, with the clueless parents and thwarted love. As time went on, the age of the protagonists got younger, but many of the ideas remained the same, even if most of the later descendants didn't have the guts to ends their films with as uncertain ending as the one here.

Comments:
Dustin's delivery of "Mrs. Robinson, you're trying to seduce me." is classic.

Mike Nichols does one of the best directing jobs ever, Anne Bancroft is superb, and the music is legendary. So why do I dislike this movie? It's always been on that list of movies that everybody loves to pieces but me (It's A Wonderful Life, Rear Window and Animal House go on that list too), and I've tried for years to convince myself to love it. But I can't.

Even when I was a kid, I always felt for Mrs. Robinson. Benjamin is a prick but the movie seems to want me to identify with him. I couldn't; I kept wanting to follow Mrs. Robinson. She's the only interesting character in the entire movie, and not because she's banging the young guy. (What would I have known about praising older women at 7, when I first saw this movie?)

I've seen this film at least 15 times, including viewing it at a theater in NYC on its 35th anniversary. It's time I came to the conclusion that it'll never get any better for me. I'm ready for the rocks that will stone me here at ECOF. Just remember: hitting me in the head serves no purpose. It's made of rock.

I agree that Benjamin is a bit of a jerk, but he even explains that. In a way, he's sort of an antecedent to Fred Savage's character on The Wonder Years, who became a bigger asshole the longer the series went on. I can't attack you for disliking it because, as I said, my enthusiasm for it always sorts of ebb and flows, but the last two times I've watched it, I've really liked it. Interestingly enough, I feel the same way about Bonnie and Clyde, so those two have swapped places at my top spot for 1967 many times over the years.