The first casualty of war is truth 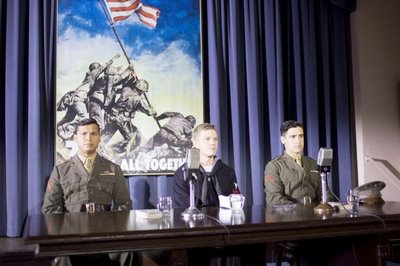 Then Ira started drinkin' hard;
Jail was often his home
They'd let him raise the flag and lower it
like you'd throw a dog a bone!

By Edward Copeland
I've been familiar with Johnny Cash's song for a long time but it wasn't until I finally saw Flags of Our Fathers that I realized who he was talking about — and the tragic story of Ira Hayes, well-played by Adam Beach, is one of this otherwise flawed film's most positive attributes.

The first of Clint Eastwood's two films concerning the World War II battle for Iwo Jima certainly looks great, but the film itself, written by William Broyles Jr. and Paul Haggis from the book by James Bradley and Ron Powers, never seems to find its bearings. There is a great story to be told here, but the structure and pacing undermine its effectiveness.

The focus is on three servicemen in World War II, the aforementioned Hayes, John "Doc" Bradley (Ryan Phillippe) and Rene Gagnon (Jesse Bradford), who helped raise a flag at Iwo Jima — only it wasn't the flag made famous in the photo since an officer ordered the original removed when a greedy connected soldier sought to take the flag as a souvenir and the men were ordered to replace it with the second one.

Unfortunately, most of the men who raised the original flag died during the battle and the U.S. government — hungry for P.R. to spur the war bond drive as funds to pay for the war begin to run dry — employ the three young men to tour the U.S. in the fund-raising effort. (Imagine — a government fighting a just war actually searching for ways to pay for the effort instead of passing debt on to future generations while giving huge tax benefits to the wealthiest Americans.)

While this certainly provides meaty material for a story that most people today would be unfamiliar with as well as some parallels to current events, the bouncing structure never seems to coalesce in a way to allow Flags of Our Fathers to gain momentum. Instead, the film moves in fits and starts.

Eastwood does compose some nice sequences, but many of the battle scenes uncomfortably resemble outtakes from the opening of Saving Private Ryan. Still, the performers do help a lot — especially Beach as the tormented Ira Hayes, guilty for taking credit for something his fallen comrades did, and Bradford (13 years after he first appeared on the film radar as the young protagonist in Steven Soderbergh's underrated King of the Hill) as a soldier hoping to build a juicy life out of his good fortune.

It's easy to see why Flags of Our Fathers has faltered at the box office — it's not enough of a war story to satisfy the action junkies and the dramatic side of politics and guilt don't quite come together. It's a shame, but read on to the next post — Eastwood sure didn't wait long to make up for this disappointment.