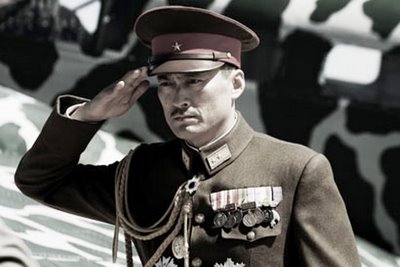 By Edward Copeland
As a director, Clint Eastwood had made some very fine films (such as Unforgiven) but nothing, not even all the early buzz, prepared me for the power he summons as a filmmaker in Letters From Iwo Jima. I had the unique opportunity to watch Flags of Our Fathers and Letters From Iwo Jima basically one after another and Letters is such a remarkable movie that it only made what I already thought was a mixed effort with Flags look like an even lesser film.

Sure, they are being sold as companion pieces, but it's not necessary because Letters From Iwo Jima is the true keeper and the one that will really stand the test of time long after Flags of Our Fathers fades from our memories. With nearly all the dialogue in Japanese, I really think that Letters From Iwo Jima stands a chance at becoming the first foreign language film to scoop up a best picture Oscar win and, based on what I've seen so far this year, it deserves the prize.

Ken Watanabe stars as a Japanese general sent to oversee operations on the island as they anticipate an imminent U.S. attack and are determined to hold this bit of Japanese soil. Watanabe, who has been good in English-language roles in The Last Samurai and Memoirs of a Geisha, exhibits even more acting power speaking in his native tongue as the officer who knows he and his men have basically been left to die and who holds a soft spot in his heart for the American way of life due to time he spent in the states long before war reared its ugly head.

Whereas the battle scenes in Flags of Our Fathers seem overly familiar, Letters From Iwo Jima makes it seem as if Eastwood was holding it all back for this film, creating some of the most harrowing images of warfare I've ever seen on film.

The film, written by Iris Yamashita from a story by Yamashita and Paul Haggis, Letters From Iwo Jima delivers an emotional punch that's difficult to duck or resist as you watch the Japanese soldiers torn by their desire to win the war or just plain survive, especially once they realize that devastated Japanese forces elsewhere have basically abandoned them to die on the island — and expect them to do so. The faces of the actors playing these desperate men likely will be burned in your memory for long after Letters From Iwo Jima has finished its tale.

It's also worth noting that while Letters is a good 10 minutes or more longer than Flags, it never drags as Eastwood's other film did. I feel as if I should go on forever about how great this film is — I haven't even touched on the great technical aspects such as Tom Stern's cinematography — but at the same time, my memory of it is so fresh that I feel as if I should see it again before I expound more — and that I should also let others savor the experience for themselves.

Comments:
I really look forward to seeing this. Eastwood has proven himself to be one the best filmmakers working today, with a genuine talent for bringing new perspective to established genres (the western, the "women's picture" romantic tearjerker, the boxing picture, and now a war film) . I still think you give short shrift Million Dollar Baby - to me, it was easilly the best American film of 2004. Another great Eastwood-directed film that isn't mentioned as often as it should be is 1976's The Outlaw Josey Wales - as fine and tough an exercise in Western neo-classicism as Unforgiven, and featuring one of Eastwood's best performances.

I skipped Flags of Our Fathers because nothing I'd read or heard about it particularly inspired me to see it. Do you think it's of benefit to try and see both films together, or shouldn't it really make much of a difference? I think you've already answered the question, but I don't know how much cross-referencing there is between the two films.

Other than taking place on the same island, there really is no overlap between the two films. The American soldiers who appear in Letters are not any of the same ones from Flags.