You have to get your hands dirty 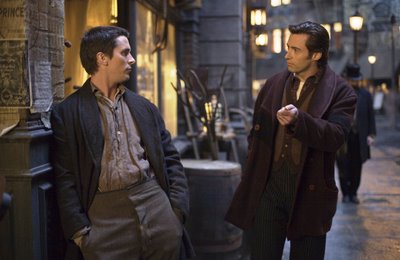 By Edward Copeland
As the election season winds down, the campaigns seems to get deeper into the dirt. If voters think 21st century politicians can be underhanded, they should consider what feuding 19th century magicians could be capable of, at least in director Christopher Nolan's The Prestige.

After scoring with an Americanized version of the great Norwegian thriller Insomnia and infusing Batman Begins with his own particular sense of style, Nolan has produced his best film since Memento put him on the map with The Prestige, a twisty account of rival 19th-century magicians (Christian Bale, Hugh Jackman).

Initially, the magicians are a team, working for a behind-the-scenes man (Michael Caine) and a tired stage magician while awaiting their own shots at stardom. However, when an act goes dreadfully wrong, it ignites a lifelong feud between Bale and Jackman that seems to raise the stakes each time the other makes a move.

While the film's twists really aren't that crucial to the film's success, I'm going to refrain from much in the way of further details to avoid spoiling anything for future viewers, though I will mention that I pretty much figured things out about midway through the movie.

Nolan, with a script co-written by his brother Jonathan and based on a novel by Christopher Priest, scrambles the chronology quite a bit in The Prestige, but it's seldom confusing. What really makes this period piece soar are the performances, especially from leads Bale and Jackman.

Caine gives one of his best turns in quite some time and there also is notable work by Andy Serkis, for once getting to actually physically perform a role without digital covering, and David Bowie as real-life famed scientist/inventor Nikola Tesla.

Because so much of The Prestige does involve the plot's unfolding, it almost limits what you can write about the film except for its ideas that float around the edges such as the assumption that people want to be fooled (WMDs anyone?) and man's reach always exceeding his grasp.

In one scene, Caine explains that making something disappear isn't the key to a trick, you have to bring it back. Christopher Nolan hasn't gone anywhere — but The Prestige does seem to be more like a reappearance of the filmmaker who made Memento.

Comments:
Of course, I loved Memento. Although it wasn't quite of the same caliber, I did think Insomnia was a pretty impressive follow-up, especially when you consider how dissapointing most sophomore efforts can be.