From the Vault: Memento 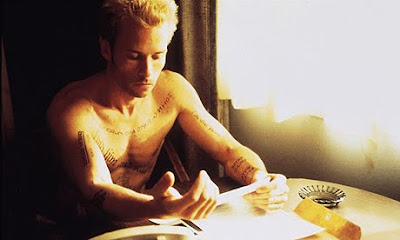 In the spirit of the film being reviewed, let's start at the end: Memento is the first truly memorable movie of 2001. Whether Memento will still hold the title once December rolls around is anyone's guess. As the film's hero frequently points out, memories can be treacherous and unreliable.

Leonard Shelby (Guy Pearce) should know. When his wife was brutally attacked, Leonard took a serious blow to the head that left him with a rare disorder that prevents him from making new memories.

That's quite a handicap for anyone, let alone someone determined to punish the guilty — a revenge he'll forget soon after it's exacted.

To compensate for his short-term memory loss, Leonard must rely on notes that he writes on his body and photos he takes of people and places. The smallest details need visual proof for Leonard, otherwise he might drive away in someone else's car.

While Memento sounds like a standard mystery with a memory gimmick, what's most distinctive about the movie is that its story is told backward. We begin at the end and each sequence takes place earlier than the one before it.

It may seem like a tricky device, but it's not a new one. It has worked well in the stage and film versions of Harold Pinter's Betrayal and in a memorable episode of Seinfeld.

Unlike a typical whodunnit, Memento forces moviegoers to guess how Leonard arrived at his conclusions. When you see that he's learned the culprit's license plate number, you have to sift through the time-tripping clues to ascertain how Leonard gained this information in the first place.

Directed by Christopher Nolan, who adapted his brother Jonathan's short story, Memento grabs the viewer early as it toys with the moviegoer's own perceptions.

The darkly humorous script mines laughs from Leonard's plight and the people who seek to take advantage of him, but it never strays completely into comedy, keeping the sadness and the gravity of the situation in sight at all times.

Pearce, who starred in L.A. Confidential and The Adventures of Priscilla, Queen of the Desert, looks completely different as Leonard. He plays him with the driest of wit and without an ounce of self-pity.

Joe Pantoliano and Carrie-Anne Moss stand out as two acquaintances Shelby meets during his investigation, each of whom may or may not have his best interests at heart.

It's best not to delve much further into the details of Memento because its chief pleasure is how it unfolds.

So much suspense has been built up by the film's resolution, it would seem impossible for the film to concoct a satisfying ending, but Memento ties up its loose ends beautifully.