Murder on the Environmental Express 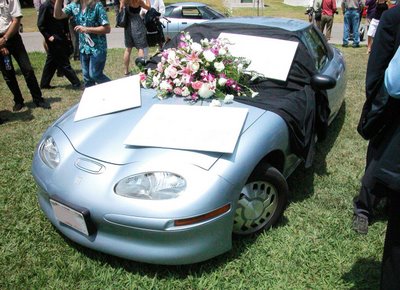 By Edward Copeland
During the course of this excellent documentary, the filmmakers put up title cards detailing the possible suspects for the crime mentioned in their title Who Killed the Electric Car? Since they couldn't know it at the time, I wonder if another suspect could be the documentary branch of the Academy of Motion Picture Arts and Sciences which, as in the case of the great film Anytown USA, left this spectacular documentary off their short-list for the documentary feature prize as well.

At barely more than 90 minutes long, I can't recall any documentary that moves with as much speed as this one. Though it does seem at times to be repeating the same points, it still proves to be a fascinating tale about the multitudes of people and industries who, while not necessarily in collusion, ended up conspiring by their actions in eliminating a sleek, practical electrical vehicle from the roadways.

Ironically, the man who initially ordered the development and manufacturing of the EV1 (initially given the unfortunate name of Impact) was none other than former GM CEO Roger Smith (Yes — that Roger Smith, from Roger & Me fame), though unfortunately his successors at GM didn't share this enthusiasm for the vehicle, setting out to try to fudge numbers showing actual consumer demand for the project and refusing to allow anyone to buy the vehicles, letting them only lease them so that once the leases were up, though the people driving them wanted to buy, they were not given that option and all the vehicles were reclaimed before heading off to their eventual destruction.

However, it wasn't the auto industry itself that killed its own baby — the oil companies, the government and even to some extent skeptical consumers played a hand in striking the many fatal blows of what looks like a great product that now is no longer available. Writer-director Chris Paine's documentary is as sleek as the car itself and truly illuminating. It shouldn't be missed.