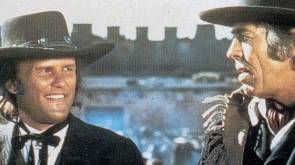 By Edward Copeland
This post shall be brief, but I wanted to scribble a few thoughts on Sam Peckinpah's Pat Garrett & Billy the Kid while I have them. I can't really assess the film, since I still don't have the emotional attention span to really judge a feature-length film yet. It literally took me two weeks of stopping and starting to get through the movie, which in this case is the reworked 2005 version of the movie. Having never seen it before and having even less patience to try to get through a commentary track, I can't compare the two. It certainly didn't seem to be up to Peckinpah's best, but I'm not much of a judge right now.

Hopefully, I'm going to be back in the swing of things soon, but I don't know. Green Cine just sent me part 2 of The Best of Youth, months after I saw part 1. I hope I can remember what happened in the first half. As for Pat Garrett, two things did stand out for me. Of course, there is Bob Dylan (and until I glanced over at Liverputty, I had no idea today was his 65th birthday) and his music. Not sure how good his performance really is, but he did have a face made for Westerns. The other is the vast cast of Western regulars who pop up in a variety of roles both large and small, especially James Coburn as Garrett. Two of them provide what to me was the most vivid image of the entire movie. I may not recall much about the movie, but I doubt I'll forget the looks between Katy Jurado and the wounded Slim Pickens. It may be the most touching images I've ever seen in a Peckinpah film.

Comments:
You're right, it wasn't one of Peckinpah's better efforts. And Dylan's participation was a big part of the distraction. His character was pointless. Off the set, I think Peckinpah liked him alright, but thinking of how to use Dylan was more of a hassle to him than anything else. Still (though I never saw Renaldo & Clara) I can confidentally say it was still the best movie he's been in. Hearts of Fire and Masked & Anonymous? Ouch and double ouch...in no particular order.