From the Vault: Short Cuts 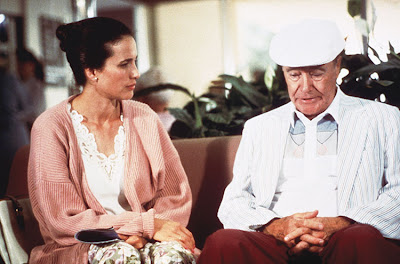 Helicopters hover in the night, spraying Los Angeles with pesticides in hopes of exterminating the dreaded Mediterranean fruit fly. In Short Cuts, Robert Altman's Raymond Carver-inspired vision of L.A., it's humanity that seems on the verge of extinction as the master director uses Carver's wonderful stories as a springboard for his epic look at modern life.

Fresh from the triumph of The Player, Altman returns to the style of filmmaking he mastered in the 1970s, creating an astounding cinematic canvas of memorable characters and sly observations.

Twenty-two main characters populate the L.A. of Altman's screenplay, co-written with Frank Barhydt. Unlike the movers and shakers of Hollywood depicted in The Player, Altman zeroes in on the people who surround Hollywood's elite in the suburbs — working- and middle-class citizens struggling with marriages and jobs, natural disasters and human tragedies. Singling out some cast members above others in this top-notch ensemble seems unfair, but the standouts in my mind are Jack Lemmon, Tim Robbins and Jennifer Jason Leigh.

Lemmon plays a long-absent father who pays a surprise visit to his estranged son and embarks on a funny, touching and wholly inappropriate confessional in a hospital cafeteria. Lemmon makes each syllable of his dialogue resonate to the point that the consonant B rings out of the word robe to hilarious effect.

Robbins similarly straddles the line between humor and pathos as a chronically unfaithful husband who hates the family dog and distrusts his cheating mistress.

Leigh, who always turns in an interesting performance, soars as a phone sex operator who works at home while taking care of her children and her husband.

The weak points of Short Cuts stem from the storyline involving a lounge singer (Annie Ross) and her cellist daughter (Lori Singer). That strand is the only one that Altman created from scratch instead of being drawn from Carver and it stands out as somewhat standard and predictable in comparison.

For Carver fans, Altman doesn't render a faithful adaptation but merely uses the writer as a launching pad for this incredible work. The story that most closely resembles its Carver origins is the one based on "A Small, Good Thing," but the quick intercutting of the various tales slightly undermines its emotional payoff in the film. However, only readers of the story will probably notice.