From the Vault: Quentin Tarantino 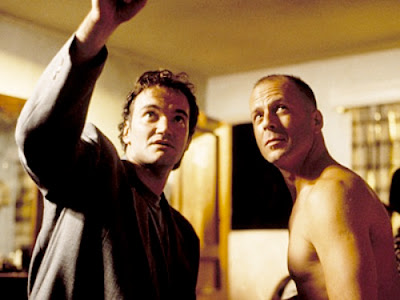 NEW YORK (September 1994) — Quentin Tarantino moves at a pace even faster than his movies, if that's possible. The energy that drives his stories at warp speed comes straight from the joy he gets from talking about film. With the tone that discussions about or with Tarantino take, it would seem as if he were a veteran filmmaker, but Pulp Fiction is only his second directing effort. Two of his screenplays have been made by other hands, the fairly faithful True Romance and the Oliver Stone-ified Natural Born Killers, a film Tarantino has yet to see.

"I was kind of interested in seeing (Natural Born Killers) for awhile, with all the pre-release hype around it ... and kind of got caught up in that, but then I ended up leaving the country when it opened. I was doing press in Japan. Then I came back, and went and saw Color of Night instead."

Pulp Fiction, however, has been a much more satisfying experience. Following his impressive debut writing, directing and acting in 1992's Reservoir Dogs, Tarantino has created a whirlwind movie ride with a great cast including John Travolta, Samuel L. Jackson, Bruce Willis, Uma Thurman and Harvey Keitel, among others. The reaction to Pulp Fiction has been almost universally positive. The movie won the coveted top prize, the Palme d'Or, at this year's Cannes Film Festival. Like Reservoir Dogs before it, Pulp Fiction will likely draw controversy over its violent content, though it's at a much lower level than in Tarantino's first work.

What bothers the 31-year-old filmmaker the most is how violence can be used to dismiss a film without seeing its context.

"It's a drag being rejected out of hand, pigeonholed or misunderstood just because of one element of my film. It gets to be a real drag when I think I've tried to put many elements in my movie, having one magnified. Just talking about it analytically gives a false impression that I'm thinking about it that way, but I'm not — I'm telling stories. I never think in terms of violence in my stories, it's just what happens, where the characters go."


He also dismisses the notion that violence in movies and television fiction desensitizes viewers to violence in real life.

"I've never bought that argument about desensitizing ... did the reign of the Borgias desensitize the peasants in Italy? It's one of those things that happens through the decades — 'There's crime in the streets, There's blood in the streets, murder — blame the playmakers.'"

As Pulp Fiction co-star Willis said during interviews for the film:

"I don't think anyone in Rwanda has seen my films, yet 500,000 people were macheted to death."

The political aspect certainly drives and affects Stone, who was the first person in Hollywood to buy a Tarantino script, but then made Natural Born Killers completely his own. Though Tarantino has been fairly candid about his dissatisfaction with Natural Born Killers, it wasn't the pain of seeing his script changed dramatically that kept him from seeing it.

"(It was) more just lack of interest. It's been quite painful for awhile and now it's not painful, it's just kind of there."

As for the writer-director-actor and his relationship with Stone now, Tarantino admits, "He's not inviting me over to his house for tea and crumpets. I think I've gotten my position very clear that I've distanced myself from the film."

"Actually, to give the devil his due, he was very cool when I said I wanted to take my name off the screenplay. He facilitated that to happen. He could have caused a big problem, but he didn't. When it comes to Natural Born Killers, more or less the final word on it is that it has nothing to do with me. One of the reasons I wanted just a story credit was I wanted that to get across. If you like the movie, it's Oliver. If you don't like the movie, it's Oliver."