From the Vault: Natural Born Killers

BLOGGER'S NOTE: I originally wrote this review (with some additions for this event) upon Natural Born Killers' original 1994 release. I'm re-posting it for The Oliver Stone Blogathon concluding Oct. 6 at Seetimaar — Diary of a Movie Lover 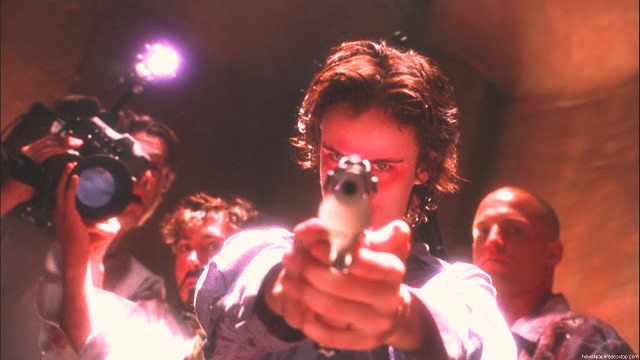 As Mickey Knox lies on his motel bed, watching various violent films while images of Josef Stalin appear in the window behind him, he asks, "Why do they keep making all these fucking movies?" Good question, Mickey, but perhaps you should pose your query to the director of your movie because no amount of Oliver Stone's rationalizations will make Natural Born Killers original or worthwhile.

Forget The Doors. This film from the ever-controversial and increasingly dull (in all senses of the word) director marks the most extreme example yet of Stone spanking the monkey perpetually perched on his back. Quentin Tarantino* originally wrote the screenplay for Natural Born Killers, but Stone and co-conspirators David Veloz and Richard Rutowski butchered Tarantino's script to the point that he's now credited only with its story. 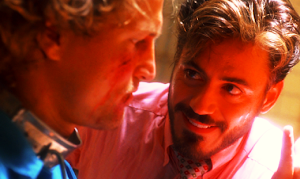 The film contains two halves: The first hour deals with a murder spree that companions Mickey and Mallory (Woody Harrelson, Juliette Lewis) undertake; the second chronicles the duo's incarceration and a live TV interview with Mickey by the host (Robert Downey Jr.) of a fictional tabloid TV series. The problems with Natural Born Killers accumulate at such a rapid pace that a thorough dissection of the film could end up as a thesis instead of a review. Stone, using what I assume must be either black magic, hypnotism or extortion, still manages to keep many film writers in his thrall to the point that they can't admit what a botch he's produced with Natural Born Killers. It's not that Stone can't be effective. He even made the silliness in the three-hour plus JFK entertaining despite the absurd claim that Kennedy was killed in order to stop the president from preventing the Vietnam War and, by extension, the need for Oliver Stone's film career. Stone's point-of-view concerning Natural Born Killers doesn't register anywhere near the realm of coherence. 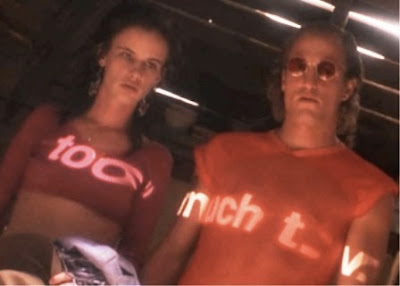 The real subject — and I'm merely guessing — of Stone's awful opus aims at media obsession with sensationalism, certainly as timely as ever in the age of Tonya and Lorena, O.J. and the Menendez brothers. The number of usually reliable film fans who praise Natural Born Killers as original and fresh when no original idea resides in its empty little head amazes me. As usual, Stone proves as subtle as an 8.0 earthquake and twice as shaky (Exhibit A: See film still above). All the movie's points have been made before and better, from films dating back at least to 1967's Bonnie and Clyde, 1976's Network and even through the looking glass to 1931's The Front Page, which itself has been remade three times, the greatest being 1940's His Girl Friday

Stone also experiments more with film styles, alternating as he did in JFK between color, black and white, 16 millimeter, Super 8, video and even adds animation akin to graphic novels. Unlike JFK, these switches serve 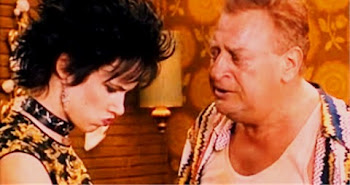 no purpose other than to distract the audience. He also trots out other weird devices such as treating scenes with Mallory's monster of a father (Rodney Dangerfield) as if they exist in a TV sitcom, complete with laugh track and bleeped profanity — except for some reason some cuss words get bleeped and others don't. Of course, he can't resist tossing in some mystical Native Americans, just for good measure. It's hard to fault the performers (except for Tommy Lee Jones' inexplicable decision to play a prison warden as if he's imitating Reginald Van Gleason) since saving this mess would have been impossible for the greatest of actors, but at least Downey's wry performance injects some much-needed levity into this often tedious film. Downey appears to be the only actor aware that he's — in theory — signed on to the satire Stone believes he's making, but it's never a good idea to place a satire in the hands of someone without a sense of humor.

In the end, it's ironic that Natural Born Killers stars former Cheers regular Harrelson since a paraphrase of a question Frasier once asked Cliff on that show immediately sprang to my mind while watching this mess: "Hello in there, Oliver. Tell me, what color is the sky in your world?"

*BLOGGER'S NOTE: Shortly after seeing Natural Born Killers, I had the opportunity to interview Quentin Tarantino who was promoting Pulp Fiction. He shared his thoughts about how Stone changed his screenplay.

"Actually, to give the devil his due, he was very cool when I said I wanted to take my name off the screenplay. He facilitated that to happen. He could have caused a big problem, but he didn't. When it comes to Natural Born Killers, more or less the final word on it is that it has nothing to do with me. One of the reasons I wanted just a story credit was I wanted that to get across. If you like the movie, it's Oliver. If you don't like the movie, it's Oliver."

Comments:
Fuck yeah! One of the least intelligble films I've ever seen -- you knock the shit out of it! Lol, now please help me fathom why you watched this godawful piece of celluloid diatribe again?

I didn't watch it again. My "From the Vault" reviews are reviews as I originally wrote them when they came out, so this is from 1994 when it premiered.

Oh, lol. Well, looks like you were ahead of the critics circle then. Cute dog, btw.

Probably the most original part of NBK was the sitcom piece, which completely tore up the gratingly fake funny congenial slob family sitcom and turned it into this nightmare situation where Mickey basically "rescues" Mallory from Hell, by killing her molester father and enabler mother. I thought casting Rodney Dangerfield as the pervert dad was actually pretty nifty.