From the Vault: Casualties of War 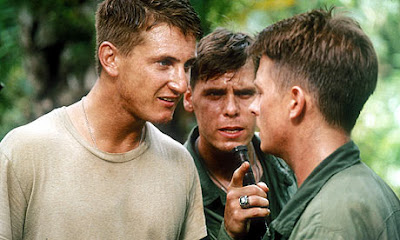 Some of the most compelling moments in recent film history have come from the work of Brian De Palma, even though his films were more often than not a mixed bag. Casualties of War is the latest example of this part of DePalma's nature.

De Palma comes to Casualties of War fresh from The Untouchables, his most successful film, artistically and financially, to date. While that film was a near masterpiece of pacing, characterization and storytelling, the new film is lacking in all of these areas.

Casualties of War takes us on another trip into one of the darkest chapters in U.S. history — Vietnam. However, the war is really just the setting for the story, which aspires to be a metaphor for people who use sex as a weapon. The plot, based on a true incident, details a platoon which, under the pressure of a revoked leave, abducts a Vietnamese girl and takes her out on a mission where the soldiers, led by the sergeant (Sean Penn), rape and murder her with the exception of one private (Michael J. Fox).

The casting keeps the film from becoming truly interesting since both Fox and Penn play their roles in rather one-note ways. Fox is all that is good. He knows what his squad is doing is wrong, though the conflict of turning his buddies in is hinted at. Penn begins his role as a normal, hard-working soldier but once the kidnapping begins he turns into Instant Psycho — just add sweat and you have a jerk only Robert De Niro could love, since he seems to be the inspiration for Penn's character.

This problem could have been alleviated if Fox and Penn switched roles. Penn would have been better at portraying the conflict over turning in his fellow soldiers that Fox never shows. If Fox had been the bad guy, the audience probably would have been riveted to the screen watching this boy-next-door type commit this atrocity.

The pacing and the story just don't mesh. The set-up before the kidnapping and the incident itself seems to drag on forever while the aftermath involving Fox's attempts to bring the squad to justice seems rushed and abbreviated. It's a shame because the composition and a handful of sequences showcase De Palma at his very best. Screenwriter David Rabe, who wrote hit plays such as Hurlyburly and Streamers, needed to give the director tighter material.

As it stands, the film seems aimless and meandering, made all the worse by the inclusion of a completely unnecessary stateside epilogue that makes you leave the theater chuckling instead of shaking.