From the Vault: Bullets Over Broadway 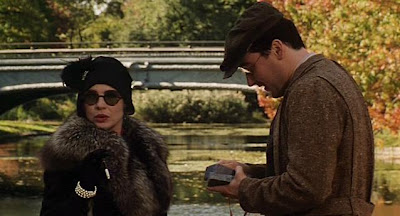 The arc of the story in Woody Allen's Bullets Over Broadway builds slowly into one of the cleverest plots the filmmaker has invented. Similar in spirit to last year's buoyant Manhattan Murder Mystery, Bullets tells an entertaining period piece about what happens when the worlds of gangsters, artists and theater folk collide in 1920s New York.

John Cusack stars as Daniel Shayne, a budding would-be Eugene O'Neill trying desperately to get his latest play staged on Broadway. His producer (Jack Warden) finally secures financial backing but it comes with a catch — Shayne must compromise his artistic integrity by allowing the untalented mistress (Jennifer Tilly) of the mob-connected moneyman (Joe Viterelli) to act in the show.

The twists and the slow climb that the script by Allen and Douglas McGrath take are integral to the story's enjoyment, so it's best to refrain from any further plot description.

The performances sparkle across the board, especially Chazz Palminteri as an underworld thug who keeps tab on the mistress and injects his two cents into the play's revisions and Dianne Wiest, who creates a great comic character as a fading theatrical legend.

What's so welcome about Bullets Over Broadway is that Allen uses more subtlety as he pontificates about many familiar themes than he's shown in years.

Bullets also manages to be funny as hell. It boasts a stellar supporting cast including Rob Reiner, Jim Broadbent and Tracey Ullman in addition to those mentioned above.

After a couple of retreads and one big misfire, it's reassuring to see Allen back on solid footing, especially in such a clever, funny package.