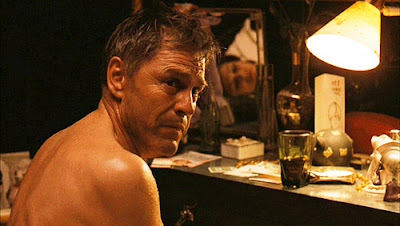 G.D. Spradlin, the man who began his adult life as an Oklahoma oil man before switching careers in his 40s to become an actor, has died at age 90.

Among Spradlin's most notable film roles were as the corrupt senator in Francis Ford Coppola's The Godfather Part II and Reverend Lemon, the minister who helped finance an Ed Wood movie in Tim Burton's Ed Wood.

He got his start in the 1960s with guest shots on many television series, especially Westerns. Throughout his career, he often was cast on TV and in film as politicians (Rich Man, Poor Man; Houston: The Legend of Texas; Robert Kennedy & His Times; The Long Kiss Goodnight) or military men (Gomer Pyle; Tora, Tora, Tora; Judgment: The Court-Martial of William Calley; MacArthur; Apocalypse Now; The Lords of Discipline; War and Remembrance).

He even worked with Antonioni on Zabriskie Point as well as films such as Monte Walsh, North Dallas Forty and The War of the Roses. His final role was as Washington Post editor Ben Bradlee in the 1999 Watergate spoof Dick.