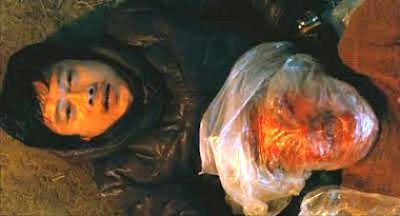 By Kevin J. Olson
For my money, some of the best films being released today are those coming out of South Korea. And one of the very best at making those films is Kim Jee-woon. Whether it’s the ghost Story (A Tale of Two Sisters), the mob flick (A Bittersweet Life) or the adventure picture (The Good, the Bad, and the Weird), Kim always is taking clichés from American genre pictures and making them more interesting than they have any right to be. With his A Tale of Two Sisters (one of my favorite films of the past decade), he turned an average ghost tale into a poignant story about sisterhood, memories and things lost. It was deeper and more heartfelt than it had any right to be. Not to mention the thing looked really damn good. Then there was his war picture, The Good, the Bad, and the Weird, which again took all of the clichés we Americans come to expect in an action/adventure picture and puts his twist on them so that without realizing it we’re giving ourselves completely over to the material despite being so familiar with the beats. It is this visceral energy and the fact that there’s always something deeper beneath the familiar surface of Kim’s films that makes them so engrossing.

I Saw the Devil is a slasher film, a torture film, a revenge picture and a serial killer procedural, and yet all of those labels don’t do the film justice at all. It brings together extreme violence with Lynchian humor. There’s a detour to a cannibal’s house that takes the film from slasher film/Silence of the Lambs-like serial killer picture to absurd comedy (it reminded me of another South Korean horror film in this regard, 2009’s Thirst, and somehow finds room for genuine emotion and, in typical Kim fashion, a poignant ending. It’s also one of the best films of 2011.

The film deals with Soo-hyun (Kim stalwart Lee Byung-hun, who is brilliantly stoic and vulnerable when he needs to be) a secret service agent that goes on a personal manhunt to find the man responsible for murdering his wife. Sounds simple enough, right? Kim however puts an interesting spin on this very basic tale as Soo-hyun quickly disposes of the suspects who turn out not to be the person he’s looking for. But then one night Soo-hyun can’t sleep, and he decides to go after his next suspect who turns out to be Kyung-chul (Choi Min-sik of Oldboy fame, who plays crazy and nihilistic better than anyone I’ve seen in a long time), the man responsible for murdering his wife. Oh, and he’s a cannibal to boot. I dare not reveal any more of the revenge tale because half the fun is seeing the how the cat-and-mouse game between the two unfolds as the seemingly normal agent Soo-hyun relentlessly tracks down the batshit insane cannibal Kyung-chul like he’s Yul Brynner from Westworld.

Everything aesthetically is top-notch in I Saw the Devil: The music by Mowg is operatic and fantastic during the montage scenes and low-key during the cerebral moments of the film; the framing and use of silhouette; the use of sound and silence in the film (just as he did in A Tale of Two Sisters works extremely well at creating an unnerving atmosphere; and Lee-Mo-gae’s cinematography is beautiful and has a nice sheen to it in both the big city scenes (such as Soo-hyun’s apartment at night or the final chase near the end) and in the rustic scenes where the film gets gory and unflinching and grimy in Kyung-chul’s barn (seriously, just watch one second of I Saw the Devil, and you’ll see why American horror directors can't even come close to framing a horror/torture scene the way Kim does).

The film, at 140 minutes, may overstay its welcome a tad, but it’s nothing that ever caused me to check the time and feel bored by what I was watching, and by the end I hadn’t even realized how long the film was. I got lost in this gruesome revenge tale, and by the end I was so invested that I found myself really affected by the final tete-a-tete between Soo-hyun and Kyung-chul. Like the end of A Tale of Two Sisters, Kim ends his film again with a tracking shot of the main character walking away from the scene as minimalist music plays in the background and the slow realization of the weight of everything that’s happened and the revelations that have been made finally pour over the characters. Here is Soo-hyun’s demons being exorcised and we’re not quite sure if he’s relieved because the ordeal is over and he indeed has taken and eye-for-an-eye, or if he’s horrified at the person he’s become. It’s a powerful moment that Kim wisely keeps minimalist as he ends his film, again like A Tale of Two Sisters, on a somber, contemplative note.

I Saw the Devil is easily one of Kim’s best films. It’s an unflinching and nasty genre picture at times (some of the revenge tale reminds me of a grindhouse movie) and a genuine, emotionally charged film in between the bloodshed (and man is there a lot of blood). The juxtaposition of viscera and poignancy (again, the end is brilliant in how it places the heartfelt tete-a-tete in the Grand Guignol setting) is one of the things that stand out in all of Kim’s films; it makes them more memorable, more lasting, than their basic genre components suggest they have any right to be. This is not a film for everyone, but if you can stomach the violence, you’ll find a film with a lot of humor and heart buried beneath its bloody surface.