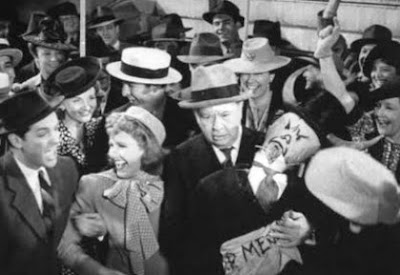 By Ivan G. Shreve, Jr.
After spending some 30 years in show business strutting and fretting upon the stage, Savannah, Ga., native Charles Douville Coburn decided to try his luck in the “flickers”…and though his first onscreen appearance can be traced back to 1933, it wasn’t until his breakout performance in 1938’s Of Human Hearts that Coburn soon was able to establish himself as one of the most dependable character presences in motion pictures. His slightly stuffy and aristocratic bearing made him the ideal person to play overbearing fathers, shady con men or wealthy millionaires in screwball comedies such as Vivacious Lady (1938) and Bachelor Father (1939), and he later distinguished himself in classics such as The Lady Eve (1941) and Heaven Can Wait (1943). He would continue to entertain audiences in the 1950s in scene-stealing roles like those in Howard Hawks’ Monkey Business (1952) and Gentlemen Prefer Blondes (1953) until his death in 1961, and even though he’s mostly remembered for his frequent forays into cinematic mirthmaking he also possessed the necessary range to tackle dramatic parts in movies such as Kings’ Row (1941; in which he plays an evil physician who causes co-star Ronald Reagan to famously emote “Where’s the rest of me?”), In This Our Life (1942) and Wilson (1944).

Coburn was nominated three times for an Academy Award by his acting peers and snagged a statuette for 1943’s The More the Merrier, playing a fusty businessman who takes advantage of the housing shortage in the nation’s capital to romantically bring together co-stars Jean Arthur and Joel McCrea. It was Coburn’s second time out working with Arthur, and while Merrier has a number of devotees proclaiming it as a screwball classic I’ve never been particularly taken with the film — in fact, I think Chuck should have received the coveted Oscar trophy for his first supporting actor nomination…and first onscreen teaming with Jean. That film debuted in motion picture theaters 70 years ago today —the delightful comedic romp known as The Devil and Miss Jones (1941).

Cantankerous multimillionaire J.P. Merrick (Coburn) becomes enraged at the sight of a photo plastered on the front page of The New York Times that shows him being hung in effigy by some disgruntled employees of Neeley’s Department Store — an outfit he could have sworn he had ordered sold years before. The unhappy Neeley drones are determined to form a union, and in order to head off that sort of labor radicalism Merrick hires a detective (Robert Emmett Keane) to go undercover as an employee and report back to him on their organizing activities. But Merrick finds himself having to take on the identity of the detective himself, and upon being hired by Neeley’s is dressed down by one of the store’s managers (Edmund Gwenn) and assigned to sell slippers in the store’s children’s shoes section. Co-worker Mary Jones (Arthur) tries to offer him encouragement and boost his morale…and when she thinks that his refusal to take a lunch period is due to his not having any money to buy any (Merrick has a nervous stomach) she lends him 50 cents for food. It also is at this time that faux employee Merrick is introduced to Mary’s fellow worker in the department, Elizabeth Ellis (Spring Byington), who develops a romantic interest in Merrick, even to the point of sharing her lunch with him (tuna fish popovers!).

Having worked his way into Mary and Elizabeth’s good graces, Merrick goes with the two women to a meeting headed up by Mary’s rabble-rousing boyfriend, Joe O’Brien (Robert Cummings), who stresses the need to organize and form a union because Neeley employees are unfairly dismissed once their wages exceed those of new hires. Mary stands up at the meeting and tells all those assembled about Merrick (whose assumed name is “Tom Higgins”): how he was embarrassed about not having any money for lunch and how after she floated him the 50-cent loan refused to buy any (apparently needing it for other things). Merrick is a bit uncomfortable at being the focus of attention but realizes that it provides him with a further opportunity to spy on the discontented workers. He’s confident that his cover won’t be blown because he lives a rather reclusive existence (and hasn’t been photographed in 20 years), his every need mostly attended to by his faithful manservant George (S.Z. “Cuddles” Sakall).

Merrick is invited to spend the day at Coney Island with Mary, Joe and Elizabeth and the extended face time he’s spending with the trio begins to soften his shell; he doesn’t particularly like Joe but when the young man defends him in front of several policemen who’ve picked Merrick up for trying to sell a watch (Merrick can’t remember in which bathhouse his street clothes are in and was attempting to vend the timepiece in order to scare up some pay phone change and call George to come and get him) he begins to understand just what Mary sees in her soul mate. Merrick also begins to grow quite fond of Elizabeth but when she vocally expresses reservations about marrying a man with money he becomes concerned how she’ll react once she learns who he really is.

Such a moment comes sooner rather than later when Merrick accidentally leaves behind a card during a subway ride home signifying that “Higgins,” the detective he’s impersonating, is to be given special treatment — Mary reads the card and upon further investigation learns that “Higgins” is a spy for the store. But she’s still in the dark that Merrick is Merrick, and when she and Joe are threatened by Neely’s general manager (Walter Kingsford) with termination because of their organizing activities Merrick agrees to side with them against management, having been educated a little more about good business practices and employee relations through his personal experiences.

The part of J.M. Merrick is the kind of role in which Charles Coburn excelled; a dyspeptic crabapple whose conservative worldview undergoes a radical change (and I’ll get to the “radical” part in a minute) once he’s climbed down from his ivory tower and learned that employees aren’t just raw materials or commodities but living, breathing hard-working human beings often forced to do whatever they can to pay the bills and put groceries on the table. Much of the humor in The Devil and Miss Jones comes from how Merrick is considered just another worker ant in the store and is treated with great discourtesy; at one point during the film when Mary pleads with him not to fret about these indignities but to just push them away. He replies: “I’m an elephant, Miss Jones — a veritable elephant. I never forget a good deed done me or an ill one. I consider myself a kind of divine justice — other people in this world have to forget things...I do not.”

Much of the slings and arrows suffered by Merrick originate from Gwenn’s general manager (“Hooper”), who in one sequence embarrasses Merrick by taking over a potential sale of shoes to the father of a little girl who acts up in the store — unaware that both girl and father work for Merrick (the “dad” is faithful retainer George). Mary convinces Merrick to swallow his pride and attempt a truce with Hooper by being a big man about losing the sale…but the general manager capitalizes on this opportunity to make Merrick feel even smaller. Unable to hold his temper, Merrick tells Hooper: “I have a hunch those shoes are coming back.” Hooper haughtily informs Merrick “My sales never come back,” prompting Merrick to retort: “Wanna bet?”

It’s always difficult for me to write objectively about actress Jean Arthur because I’m a dyed-in-the-wool devotee of her work, but Miss Jones is one of my favorites of her vehicles and she establishes the reason for this from the get-go by making the titular female a truly sympathetic character…beginning with her “pep talk” to Coburn that his being assigned to slipper detail in the department is actually a plus because the job is pretty cushy (no bending down or running back and forth for shoeboxes). Her maternal instincts kick in when Merrick waves off taking a lunch and she loans him half-a-buck for some sustenance (which he dutifully notes in a record book he’s keeping of his store experiences) and she later stands up at the organizing meeting (after explaining that this is the first time she’s ever spoken publicly) to decry how the store treats its elderly employees (with Merrick as her example). There is a great deal of comedy in this, because we know Merrick is not who he claims to be, but you also develop an admiration for Arthur’s character because she’s not afraid to speak out (in those mellow chirpy, throaty tones) when confronted by injustice.

Coburn and Arthur’s scenes are among the highlights of Miss Jones, particularly a sequence where the two find themselves alone at Coney Island (well, as alone as two can be with a crowd constantly milling about around them) and she tells him of her devotion and affection to boyfriend Cummings despite Coburn’s skepticism. But Coburn has an amazingly swell rapport with Byington, too; the scene where she introduces him to her homemade concoction of “tuna fish popovers” is disarmingly charming. Gwenn’s general manager is sort of Coburn’s rival for Spring’s affections, which sort of made me chuckle because I couldn’t help but think of the two actors’ similar competition for Byington in the 1950 film Louisa.

Bob Cummings completes the star quartet of The Devil and Miss Jones, and although I’ve always considered him the cinematic equivalent of prickly heat he’s actually pretty good here in the first of his multiple teamings with Coburn — the two men would later go on to appear together in Kings’ Row, Princess O’Rourke (1943) and How to Be Very, Very Popular (1955). In fact, when I watch Miss Jones I often marvel at how Coburn and director Sam Wood put politics aside because Cummings’ character’s political leanings are a little on the “pinkish” side, and both Charlie and Sam were members-in-good-standing (Sam served as president of the outfit; Charlie was a one-time veep) of the right-wing Motion Picture Alliance for the Preservation of American Ideals. The Alliance got its act together in 1944, so maybe the sly and subversive screenplay by ace scribe Norman Krasna (which in addition to Coburn’s performance also garnered an Academy Award nomination) had some influence on them, I can’t really say. But don’t let this backstory dissuade you from watching this classic film comedy, a movie whose politics may date a tad but which contains fine performances not only from the ones already named but additionally fine turns from William Demarest (I just wish Bill had a little more screen time; his role as a store detective is a bit skimpy), Montagu Love, Richard Carle, Charles Waldron, Edwin Maxwell, Florence Bates, Regis Toomey and Matt McHugh. (And for the OTR fans that followed me over from Thrilling Days of Yesteryear, Walter Tetley has a blink-and-you’ll-miss it bit as a stock boy!) But don’t confuse this film with 1973’s The Devil in Miss Jones…because if you do you’re in for a different kind of moviegoing experience entirely.