Have to be cautious mixing some medicines 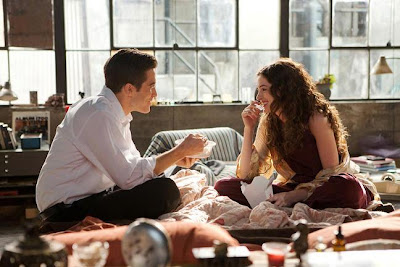 By Edward Copeland
While Love & Other Drugs ultimately peters out, it starts out fairly well and accomplishes something no other film I've seen ever has: It displays Jake Gyllenhaal in a role that for the first time made me think he might actually have some charisma and more than just very limited acting abilities.

Set in 1996, Gyllenhaal stars as Jamie Randall, the oldest son of a well-to-do doctor and his wife (George Segal and Jill Clayburgh, who appears in a single scene in her second-to-last film role) whose only success seems to be wooing women into bed. His younger brother Josh (Josh Gad, whose character seems to have been dropped in from another movie), is a schlumpy nerd who has managed to accumulate wealth of his own through development of some sort of technology and even landed a wife (though the two quickly separate) and outshines Jamie as a result.

After Jamie loses yet another job, dad hooks him up with Bruce Winston (Oliver Platt), one of the main pharmaceutical reps for Pfizer and soon Jamie's out pitching Zoloft to physicians in a battle with the rep for antidepressant competitor Prozac, Trey Hannigan (Gabriel Macht). Jamie turns out to be a natural, transferring his seduction skills from romance to prescription pills. The trouble comes when one of the doctors he's courting (Hank Azaria) treats a patient named Maggie Murdock (Anne Hathaway) and the two begin a funny and torrid fling, even though she's also seeing Trey. Jamie's Pfizer career really takes off when they release Viagra to the market and who would be better to hawk that product?

Director Edward Zwick, setting aside for at least one film staging the exact same battle in different costumes and different eras, does pretty well in the early portions of Love & Other Drugs when it works on a frenetic, comic level. However, Maggie also suffers from early onset Parkinson's, so when the movie takes its more serious turn in the later stages, that's when it starts getting bumpier.

Thank heavens for Hathaway, who is able to bridge both sides of the story well. She's really developing into a talented actress. She's great in her early scenes as the sex-obsessed woman who's more of a commitmentphobe even than Jamie. When the film takes its turn, while the movie doesn't handle the tonal shift that well, she's rather good at not overplaying her increased Parkinson's symptoms or becoming overly dramatic. She's still the character she created when she first entered the film.

Gyllenhaal, on the other hand, doesn't make that transition so easily. As I said, Love & Other Drugs marks the first time he's impressed me when he's playing Jamie, the charming rogue. It's a different side of Gyllenhaal than I've seen before and when he's in that mode, he's good. Gyllenhaal always has seemed like a colorless void to me, even when he's in a great film such as David Fincher's Zodiac, a fine but overrated movie such as Brokeback Mountain, where Heath Ledger blows him off the screen, or the nightmare memories brought on by the words Bubble Boy.

That side of the actor kicks in again when Love & Other Drugs takes its more maudlin turn and Jamie becomes a lovesick man discovering ethics and concern for a woman he loves. When the movie shifts in that direction, the empty, bland Gyllenhaal rises again. The last portion of the movie would be unbearable without Hathaway there to bail parts of it out.

Based on the book Hard Sell: The Evolution of a Viagra Salesman
by Jamie Reidy, it feels as if there could have been two separate films made from this material successfully. Exploring the world of the pharmaceutical industry and the lengths they go to to make doctors push their products alone would make a helluva movie and a love story about a horndog torn over giving up his womanizing ways for someone he knows is only to get sicker could make a touching tale as well. Even if this whole package mostly is true though, it just doesn't mesh very well.

We do learn one thing: Jake Gyllenhaal can play a certain type of part well without being a gaping bore. Now if he can find a part he can do that in that lasts the length of the entire film.

Comments:
"It displays Jake Gyllenhaal in a role that for the first time made me think he might actually have some charisma and more than just very limited acting abilities."

In regards to Gyllenhaal, check him out in Jim Sheridan's underappreciate gem, BROTHERS with Natalie Portman and Tobey Maguire. He shows some mighty fine chops in that film and Sheridan really gets some solid performances out of the entire cast. I caught up with this film via Netflix streaming and it really stayed with me for days afterwards.

I was such a huge fan of Susanne Bier's Danish original with Connie Nielsen and Ulrich Thomsen, that I just knew it would be hard for the American Brothers not to disappoint me so I chose never to see it.

I thought Jake Gyllenhaal was quite good in Jarhead and Donnie Darko, but you're right that he can become forgettable at times. He actually carries Source Code for good portions of that film as well, so maybe he's improving.

Haven't seen Jarhead or Source Code, but I wasn't one of the Donnie Darko fans in general, though I don't blame him. It's so odd not sure how to judge the performance. I'm still amazed that Zodiac was so great when he was the lead and completely colorless and though it covered a long time period, he never seemed to age at all. How he avoided sinking that film is a minor miracle on the part of Fincher and the rest of the cast.

I would also second JARHEAD which is quite the underrated film. It also features a fantastic performance by Peter Sarsgaard who I would watch in almost anything.

Agree with you on ZODIAC. I think that Gyllenhaal acts as the audience surrogate and is intentional bland as he reacts off the other characters in the film.

I love Sarsgaard. He should have had several Oscar nominations by now and he doesn't have any.