From the Vault: Bubble Boy 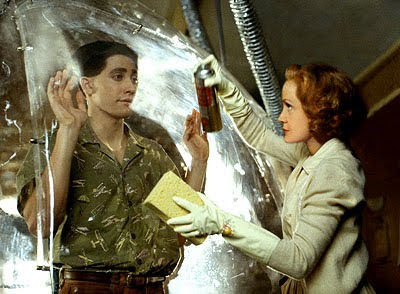 Bubble Boy, how do I hate thee? Let me count the ways.

Going in, it seemed likely that this year's seemingly endless string of abysmal comedies would not be broken by Bubble Boy, which tries to milk laughs from a boy without an immune system. That plot alone would guarantee protests by groups such as the Immune Deficiency Foundation.

Imagine what will happen once anyone sees that this turkey also finds time to ridicule most ethnic and religious groups as well.

Jake Gyllenhaal stars as Jimmy, the afflicted boy in question, whose entire life has been lived in plastic-wrapped environs, being indoctrinated about the evils of the world by his nutty mom (Swoosie Kurtz). Enter puberty and an attractive female neighbor named Chloe (Marley Shelton) that Jimmy can see from his window and Jimmy's ready to leave the confines of his bedroom.

Of course, Chloe and Jimmy become good friends, though it's never clear what attracts Chloe to Jimmy, a sheltered goofball with a haircut even more tragic than his condition. The two bond over their common love of the 1970s TV show Land of the Lost, which is funny since Cha-Ka got better dialogue there than anyone does in Bubble Boy.

Needless to say, when Chloe announces that she's getting married across the country, Jimmy heads out to stop the wedding. Thus, the film sets out on its cross-country nightmare, encountering cults, biker gangs and circus freaks. By the time Fabio turns up playing a cult leader, you'll find yourself saying, "I can't believe it's not straight to video."

Despite being less than 90 minutes long, Bubble Boy feels like an eternity. You are finally hoping someone will burst Jimmy's bubble, exposing him to an infection that can end the movie.

Perhaps what's most offensive about Bubble Boy is that it wants to be a film without any sacred cows — literally — but doesn't have the guts to go all out. It seems to want viewers to both sympathize and ridicule Jimmy.

One has to wonder whether the millions of dollars wasted producing and promoting this atrocity could have helped scientists researching solutions for real people without immune systems.