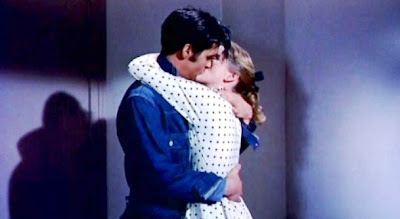 "Hollywood, in a sense, chose me. I had a series of incredible strokes of luck. I often wonder why the Lord gave me the opportunity
to audition for Elvis. There were so many of us in line that day and I can't believe I got the part." — former actress Dolores Hart 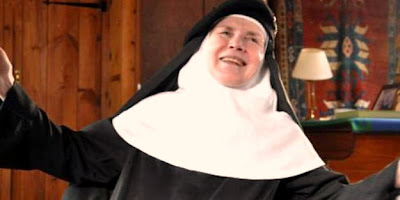 "My role is to help a person discover that you can always find hope and if you find hope, you might find faith."
— Mother Prioress Dolores Hart of The Abbey of Regina Laudis, Bethlehem, Conn.
By Edward Copeland
Dolores Hart's acting career spanned a mere six years from 1957 through 1963 on stage, television and, most famously, the silver screen, where she worked opposite such leading men as Anthony Quinn, Montgomery Clift, Robert Wagner and twice with Elvis Presley, where Hart received Presley's first onscreen kiss in 1957's Loving You. In 1963, Hart found a co-star for life with the biggest name she'd worked with so far — Jesus Christ — when Hart abandoned her stardom to devote her life to God as a Benedictine nun in a rural Connecticut abbey. The documentary short about Mother Prioress Dolores Hart's life today, God is the Bigger Elvis, which was among the nominees for the 2011 Oscar nominees for documentary short subject, debuts on HBO tonight at 8 Eastern/Pacific and 7 Central.

Hart's film career consisted of 10 films, admittedly none of which I've seen, but in director Rebecca Cammisa's film, you recognize that Hart, nearly 50 years removed from her former vocation, retains the charisma that captured the attention of those who cast the then-19-year-old Hart in her first film opposite Elvis. Mother Prioress Dolores Hart admits that she prayed that she would win the role — she converted to Catholicism at the age of 10 — but interestingly the documentary doesn't mention that her father, Bert Hicks, was a bit player in movies in the 1940s and that a visit to the set of the Otto Preminger film he appeared in, 1947's Forever Amber, put the idea of acting into young Dolores' head. (Another anecdote the film neglects: Mario Lanza was Hart's uncle by marriage.)

What the documentary does reveal about Hart's parents is that they had her as teens of 17 and 18 and her grandmother thought that the pair had created a situation so tragic, Hart's mother should abort her. That's a fairly startling anecdote, considering it occurred in 1938, that the subjects drops out as soon as it gets mentioned. On the other hand, while this documentary concerns a woman who abandoned stardom for life as a nun, the film doesn't come off as overtly religious (Director Cammisa's mother actually used to be a nun).

Even though God is the Bigger Elvis focuses on Hart and the works at The Abbey of Regina Laudis in Bethlehem, Conn., it does take time to speak to some other members of the order about what brought them such as novice nun Sister John Mary, who came from the corporate and political world and addictions to drugs and alcohol. She says she still gets stares when she attends Alcoholics Anonymous meetings in her habit. However, this short belongs to Mother Prioress Dolores Hart, which makes it all the more surprising the many details you can find in a cursory search of the Web that didn't make it into the movie. There seems to have been more than enough material out there for a feature. For example, though the short does talk about Hart's involvement in a performing arts program out of the abbey, the film omits any reference to the fact that the open-air theater at the abbey, The Gary-The Olivia Theater, that was built in 1982 came about largely through the aid of Patricia Neal, who was buried at the abbey when she died in 2010.

Commenting on Neal's death to Tim Drake at the National Catholic Register. I learned that while Hart left acting behind nearly 50 years ago, she didn't completely abandon Hollywood as she maintains an active voting membership in the actors' branch of the Academy. The interview also shares a story that seems awfully pivotal to her decision to become a nun. When the actress went to Rome in the early 1960s to play Clare in Michael Curtiz's Francis of Assisi. The young Hart got the opportunity to have a meeting with Pope John XXIII, where she informed the pontiff about her role as the future saint.

"It was quite startling when I met his Holiness. I wasn’t prepared for it. When I greeted him I told him my name was Dolores Hart. He took my hands in his and said, 'No, you are Clara.' I replied, 'No, no, that’s my name in the film.' He looked at me again and said, 'No, you are Clara.' I wanted to sink to the floor, because I wasn’t there to begin arguing with the Pope. It gave me great pause for a number of hours. Being young, I dismissed it as one of those things that happened, but it stayed very deeply in my mind for a long time."

The only other problem I found with the documentary isn't one of omission but what seems to be a deliberate conflation of chronology. The film makes it appear as if she first visited the abbey toward the end of her career, coming at the suggestion of a friend as the young 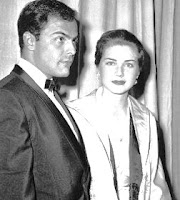 Hart faced exhaustion following nine months of appearing on Broadway in the hit comedy The Pleasure of His Company, which opened in 1958. The play co-starred George Peppard and was directed by and starred Cyril Ritchard and included a cast of old pros such as Walter Abel and Charlie Ruggles (who won the Tony for best featured actor in a play). The film also fails to mention that Hart's work in the show earned her a Tony nomination as featured actress in a play (which she lost to Julie Newmar for The Marriage-Go-Round) and won her a Theatre World Award, which goes to the six most promising male and female acting debuts in Broadway and off-Broadway shows in a season (included in Hart's 1958-59 class were Tammy Grimes, Larry Hagman, William Shatner and Rip Torn). While Hart visited the Abbey of Regina Laudis for the first time, she learned that as a Catholic, she shouldn't pursue a movie career because she could be "aroused sexually" and get involved with men. That leads to the saddest part of the film. Hart had become engaged to another good Catholic, an architect named Don Robinson. Even today, she describes it as a "terrifying time" as she found herself torn between her love for Don and the unmistakable call beckoning her life in the abbey. Needless to say, Robinson's heart broke and though he admits to dating some other women eventually (it never indicates that he married) he visits her once a year at the abbey. To watch this man in his 70s pine away for the woman he lost to God almost proves too much to bear.

Overall, nitpicking aside, God is the Bigger Elvis provides an interesting profile of a woman who made a decision most people wouldn't make, even if the details deserved more fleshing out and it would have withstood more than its 35-minute running time. The documentary premiere on HBO at 8 tonight Eastern/Pacific and 7 Central. It airs several more times throughout April and will be available on HBO GO after its debut.