Just for a Smile 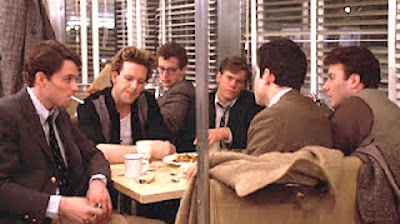 By VenetianBlond
Director Barry Levinson, just starting out as a filmmaker, turned his camera on a group of guys in their 20s who hang out in a diner. What he captured was part coming-of-age story, part Altmanesque conversation flood, and part elegy for times gone by. With an Oscar-nominated screenplay, he directed terrific performances from his cast, all of whom later became household names. Given all the high concept or high production (or both) fare that’s usually greenlit these days, it’s refreshing to see a good old-fashioned character study and wonder whatever happened to those guys in the diner.

It’s the holiday season of 1959, and during a party, Modell (Paul Reiser) pulls Boogie (Mickey Rourke) away to help with a situation. Fenwick (Kevin Bacon) is smashing out the basement windows and won’t quit. “It’s just for a smile,” he drunkenly says. But Boogie has the heft to convince him to stop and come back upstairs. Eventually they meander to their favorite hangout, the diner, joined by Shrevie (Daniel Stern) and Eddie (Steve Guttenberg). There, they can shoot the breeze, razz each other, brag and even declare their unending annoyance with each other.

They’re joined the next morning by Billy (Tim Daly), who‘s in town for Eddie’s wedding. There’s some question whether or not it actually will occur, because the girl in question must pass a football quiz or the nuptials are off. Billy’s got his own problems: After a one night stand with a good friend, she’s pregnant but won’t marry him. Boogie’s in debt to gangsters, Fenwick is perpetually drunk and Shrevie has no idea how to relate to his wife Beth (Ellen Barkin). It’s a coming-of-age story in that these guys must grow up and figure out how to deal with things, but they’re not 14 anymore. Mickey Rourke, just off of Body Heat and on his way to Rumble Fish and The Pope of Greenwich Village, pulls a lot of the focus. Boogie is the alpha male without a doubt, even though he has a soft, high voice and works as a stylist in a beauty salon. His plan to make the money to pay off the debt is to gamble more — with his friends about what sexual exploits he can manage. They are more than happy to go along. Boogie has a strong sense of who he is, but he has no idea what to do with that knowledge. When he has an opportunity to rekindle things with Beth, whom he dated before she married Shrevie, he can’t go through with it. He tells her that she and Shrevie need to work out their “thing,” which he knows is right, but he doesn’t know how to find that “thing” for himself. Mickey Rourke already shows all the charm and danger in lethal combination that would become his stock in trade.

Levinson allowed a certain amount of improvisation on the set, and that allowed for some great work, particularly from Steve Guttenberg and Paul Reiser. Modell is constantly cadging from Eddie, whether it’s a ride home or the rest of his sandwich, and it makes Eddie immediately see red. “Just say the words!” he yells, trying to get Modell to admit he’s a moocher, but he won’t It’s a hilarious recognition of the fact that our best friends can be the ones who get on our last nerve.

Kevin Bacon, looking younger than all the rest, is a surprise as the alcoholic Fenwick, who’s the polar opposite of his Chip Diller in National Lampoon's Animal House. Levinson gives him a terrific scene in which he’s watching the college quiz show on TV and he knows all the answers. He’s got potential, but it’s lost in a sterile upbringing and a loss of focus. He decides to spend Christmas in his boxers in the Baby Jesus’ manger in front of the Catholic Church, and when his friends come to get him, he punches out all the Wise Men.

Diner doesn’t have a lot of narrative drive, because the characters don’t either. They have a certain amount of faith that things eventually will work out in the end, even if they don’t know how to help them along. What they do know is that they’ve had their best friends to either support them or distract them from their troubles — even if they eventually get married and their wives “will make you get all new friends.”

As in American Graffiti, Diner looked back at the 1950s as the end of an era and a turning point for the young people in America. But where American Graffiti had a sense of urgency, Diner takes a more contemplative bent. Shrevie can’t understand why his records get misplaced, and Beth can’t understand what the big deal is. In a tour de force monologue, Shrevie explains why Charlie Parker is not filed with the rock ‘n’ roll. It sounds silly, but Beth is devastated, and both characters see that they are talking past each other, but they can’t fix it. That’s what we can relate to, whether it’s 1959, or 1982, or now.

Agreed. This is a great film and those diner scenes with adlibbed dialogue are killer. People forget just how hugely influential this film is. I think it'd be safe to say that there'd be no Tarantino, Kevin Smith or Judd Apatow films. or SEINFELD for that matter.

Levinson always was at his best when he went back to his native Baltimore.

I think one of my favorite adlibs in the diner is Guttenberg's brain freeze as he's trying to retort: "You...you...you...you've just taken a step down in my...book..."

VB: Couldn't agree more! And even better that it was a mistake that Levinson kept in because it was so real and in the moment. Love it!