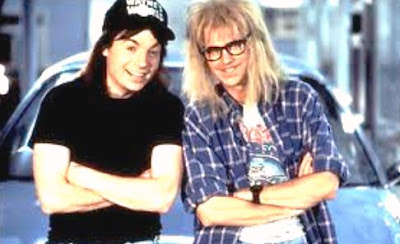 By VenetianBlond
Wayne’s World, released 20 years ago today, began life as a popular Saturday Night Live sketch that was expanded into a feature film and, surprisingly, became a cultural phenomenon. Catchphrases (Excellent! We’re not worthy!) spread like wildfire and the film became a must-see for fear of missing an integral part of American culture. It’s a no-strings-attached romp, but it’s also a frame for some biting commentary on corporate interest as well as some really heartfelt emotional moments. Without any one of these elements, it would not have held the warm spot in our memories that it does.

Wayne Campbell (Mike Myers) and Garth Algar (Dana Carvey) host a cable access show in Wayne’s basement. The show is a testament to doing your own thing. Wayne and Garth talk about what they want to talk about, usually babes, and there’s none of the usual pretension of cable access hosts trying to be more than they are. This makes their show popular in their hometown of Aurora, Ill. Throughout the film, they continually get, “Hi Wayne!” or “Party on!” greetings from anyone they run into. They’re keeping it real, and their audience responds to that. Wayne and Garth just pal around, doing their thing, going to concerts and hanging out with their friends. They’re living the teenage dream, even if they may be technically too old for that. 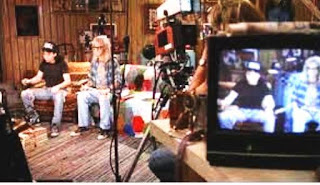 Then two things happen to throw off the slacker equilibrium. First, Wayne meets Cassandra (Tia Carrere), the woman of his dreams and lead singer for the band Crucial Taunt. Not only is she a total babe, she can totally rock. Second, Ad executive Benjamin Kane (as in Charles Foster?), played by Rob Lowe, sees the show and envisions using it to exploit his account with a video game arcade chain owner. He approaches Wayne and Garth about the show and, although they’re not really interested in changing anything, he convinces them to accept two $5,000 checks ("We got five thousand dol-lars! We got five thousand dol-lars!") and sign a contract. Of course, they can’t understand the contract at all, and they don’t know that they’ve sold the show entirely to Benjamin, who begins to “upgrade” it. The upgrades, of course, demolish everything about “Wayne’s World” that was authentic and appealing.

Meanwhile, Benjamin discovers Cassandra and begins the process of moving Wayne out of the way, because she is indeed a total babe. He can offer her money and fame by way of a legitimate music video. The final act of the movie is Garth and Wayne rallying their forces to get Cassandra seen performing in front of an even bigger producer using information they gleaned earlier that “seemed extraneous at the time.” The idea is to get Cassandra out of Benjamin’s clutches and back into Wayne’s arms. But Cassandra and Benjamin end upon a tropical beach, with Benjamin declaring, “you didn’t think she’d end up with Wayne, did you?” Record scratch, and Wayne and Garth decide to redo the ending with the Scooby-Doo ending as well as the “Mega Happy” ending” in which everyone discusses what they’ve learned.

The plot is…there, in the sense that our heroes have to have an adventure to go on, but the delights are the lines, scenes and references. They really make the movie. Garth has his own dream woman, played by Donna Dixon, who works in the doughnut shop they frequent. He can’t talk to her because just looking at her knocks him out of his chair. (Ow.) It’s a visual representation of what that intense crush-feeling actually feels like. Driving to an Alice Cooper concert (the bribe Benjamin uses to get them out of town so he can move in on Cassandra) Wayne and Garth get pulled over by a police officer played by Robert Patrick of Terminator 2. “Have you seen this boy?” he asks and they drive off in terror. When they get to Milwaukee, they act out the opening credits of Laverne & Shirley. The hits just keep on coming. 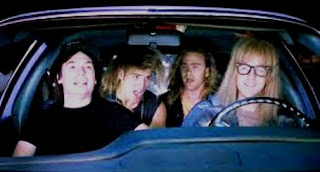 The throwback that had the most impact was the early sequence of Wayne, Garth and their friends singing along to Queen’s “Bohemian Rhapsody” in the car. That scene single-handedly put the song from 1975 back at No. 2 on the Billboard chart in 1992. The Wayne’s World scene won Queen an MTV Video Award for best video from a film. Director Penelope Spheeris was unsure that the song fit with Wayne and Garth’s hard-rocking personae, but Mike Myers convinced her it did, and it became a sensation. Wayne’s World may seem to have aged poorly, with the oh-so-'80s fashion and the role of hard metal filled with Jimi Hendrix covers, but it actually anticipated the YouTube generation. Rather than a satellite dish parked in the driveway, we’ve got smart phones and Facebook to serve the same basic purpose. Any of the Wayne’s World catchphrases could be considered some of the earliest memes. The film is also documentary evidence of one of the earliest instances of the “that’s what she said” rejoinder. (On the acting side, Rob Lowe's Benjamin Kane hints at his later performance as perfect human in training Chris Traeger on Parks and Recreation.)

There’s so much to touch on, including Wayne’s totally mental ex-girlfriend Stacy, played by Lara Flynn Boyle, Ed O’Neill at the height of his Married with Children popularity as a creepy doughnut shop worker and Alice Cooper’s educational backstage party. Oh, and the “Ex-squeeze me? Baking powder?” or “Assphincter says what?” For me what makes it work is the heart that holds all the individual jokes together. Wayne and Cassandra’s “camera one, camera two” scene shows the goofy affection of new love to perfection, and when it turns sour, the exchange “Could you be any more insulting?” “Yeah, I could,” has real emotional impact. Kudos to Mike Myers for that moment. A personal favorite is when lying on the hood of the car, Garth asks Wayne if he ever found Bugs Bunny dressed as a girl bunny attractive. Wayne just bursts out laughing, and it’s hard to fake that kind of relaxed laughter you have when you’re just hanging out with your best bud.