Late Night wouldn't have been the same without Chris Elliott 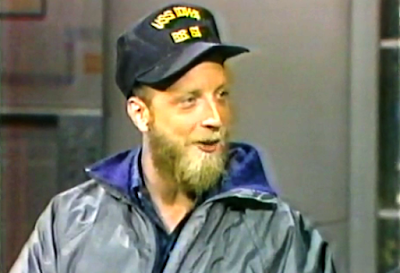 By Edward Copeland
The key to the success of Late Night with David Letterman wasn't just Letterman but the crack writing staff he assembled that shared his bent sense of humor. One of those writers in particular proved to be a breakout star of his own by the many characters he would play during appearances on the show. His name was Chris Elliott and he was a mere 31-years-old when Late Night debuted. As far as Late Night fans were concerned, Elliott quite literally was the guy — as in The Panicky Guy, The Conspiracy Guy, The Guy Under the Seats, The Laid-Back Guy, The Fugitive Guy and The Regulator Guy.

I desperately tried to pin down Elliott's first on-camera appearance on Late Night and I think it may have been on the 25th or 26th show that aired either March 15 or March 16, 1982, in the role of "Garbage" in a sketch about "Urban Paranoia," but I can't be positive. Elliott also would appear as himself, usually in the Viewer Mail segments, as the "staff scientist" answering questions such as the one in this example from YouTube.


Eventually, Elliott would have his own career on television and in the movies. On TV, he starred in the short-lived cult sitcom Get a Life on Fox and later had a recurring role as a brother-in-law on Everybody Loves Raymond, provided the voice for the TV version of Dilbert and served as a cast member on Saturday Night Live for a season. In the 1970s, his father, Bob Elliott, half of the legendary comedy duo Bob & Ray, hosted SNL with Ray and did a Bob & Ray special with the original women of SNL. Now, Chris Elliott's daughter, Abby, is part of SNL's cast, making three Elliott generations involved with the show. On the big screen, Elliott starred in and co-wrote the story with screenwriter and director Adam Resnick (another former Late Night writer) for Cabin Boy, which included a cameo by Letterman (using the name Earl Hofert) as Old Salt in Fishing Village. Letterman turned his single line — "Would you like to buy a monkey?" — into a gag when he hosted the Oscars with stars such as Anthony Hopkins testing for Letterman's role. Elliott's supporting roles in movies such as Groundhog Day and There's Something About Mary came off better. He even did small, noncomic turns in films such as Michael Mann's thriller Manhunter and James Cameron's The Abyss.

Before I let the clips tell the story of the "guys," here are some impersonations and other sketches that Elliott performed on Late Night. First, Chris Elliott testifies during the Iran-Contra hearings.


Next up, Chris did his take on two talk show staples. First, Chris Elliott is the director of the Columbus Zoo, not Jack Hanna. Second, it's Marv Albert with the wild and wacky in the world of sports.

After Glenn Beck, Michael Savage and many of the other wackos we've seen and heard recently, Morton Downey Jr. has largely been forgotten, but back in the 1980s the loudmouth was a phenomenon briefly and spawned "The Chris Elliott Jr. Show."


I have to admit that this one was my favorite and it's hard to not pick every clip out there, but in the 1980s when the great actor Marlon Brando was a world-class loon giving rambling interviews to Connie Chung and Larry King (including a big wet kiss on the lips), when Elliott started showing up as Brando, that was funny enough. When he ended every appearance doing the "Bananas" dance to "Alley Cat," it was hysterical.


The joke about The Regulator Guy, a Terminator-like spoof that was supposed to be Elliott's new series, was that it never aired. Every time he showed up to show a clip or premiere an episode, something would interrupt it or pre-empt it.


One of the earliest running characters Elliott came up with was The Conspiracy Guy, usually seated in the audience spinning outlandish theories about all sorts of topics. Today they are knows as Birthers and Truthers but they have no sense of humor.


Picking just one guy under the seats segment was the hardest of all because they were so many and so varied. Go to YouTube and check out the other ones out there.


Finally, I think the only way to conclude a post on Chris Elliott is to end with the final installment of The Fugitive Guy since it is the one they put the most effort into with location shooting, dragging Letterman along, the credit sequence, etc. NBC can suck on my intellectual property rights as I salute Letterman and his cohorts today.