Everyone understands the language of a bully 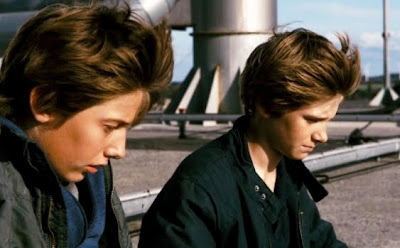 By Edward Copeland
By the same token, hate, bigotry and intolerance also happen to be among the handful of dialects that don't require translation. Susanne Bier's In a Better World touches upon all those topics and raises the question of whether there comes a time when turning the other cheek ceases to be practical or if vengeance can ever be justified because it simply makes a tormentor's victim no better than the tormentor himself. The Danish film took home the 2010 Oscar for best foreign language film, beating such renowned competition as Biutiful, Dogtooth and Incendies, but only received U.S. release in 2011. I wasn't a fan of Biutiful, haven't seen Incendies and it's difficult to compare Dogtooth to just about anything, but In a Better World proves to be far from an embarrassing winner of the prize (as has been the case so often, coming off quite well and avoiding most of the preachiness that could trip up a film venturing into this subject matter if handled purely as a means to sell a message.

In a Better World marked Bier's second nomination for the Oscar for foreign language film. I haven't seen that movie, 2006's After the Wedding, but it would have to be damn good to best that year's winner, Florian Henckel von Donnersmarck's exquisite The Lives of Others with its touching performance by Ulrich Mühe, all the more haunting now since he died so soon after gaining his greatest international fame from the film.

I did, however, really like Bier's 2004 work (released in the U.S. in 2005). Brothers, which was remade in 2009 by director Jim Sheridan with Tobey Maguire, Jake Gyllenhaal and Natalie Portman cast in the roles played so well in Bier's Danish version by Ulrich Thomsen, Nikolaj Lie Kaas and Connie Nielsen. Needless to say, though I usually give more leeway to English language remakes of foreign language remakes, there was no way in hell that I would dare watch the excellent original defiled by the new cast, especially expecting to buy Mr. Bland Gyllenhaal as a believable screwup. Of course, the biggest screwup concerning the original Brothers occurred in 2004 and was committed by the Danish jury picked to select Denmark's entry for the Oscar.

That year, there were two critical (and, coincidentally, box office) successes: Brothers and a film I'm not familiar with titled King's Game. Everyone assumed that one of the two would be chosen as Denmark's entry and would make for a strong contender. Instead, the jury opted for Lars von Trier's The Five Obstructions, really a documentary, which attracted less than 13,000 moviegoers total in Denmark. Critics, scholars and citizens protested to no avail and The Five Obstructions remained Denmark's official entry for the 2004 Oscar foreign language film jury and failed to make the cut. Even if Brothers had made the cut, it wouldn't have been a guaranteed winner, even I were the sole voter because as much as I liked that film, I don't know that I would have voted for it over the winner, the great film The Sea Inside for which Javier Bardem deserved a nomination, and one of the other nominees, Downfall, with Bruno Ganz's overlooked performance as Hitler (and eventually endless source of hilarious YouTube parodies).

Enough digressions. Time to talk In a Better World. The story concerns two 10-year-old boys from families fractured in different ways, transplanted to Copenhagen, Denmark, who gravitate into a friendship spurred by both being bullied. Christian (William Jøhnk Juel Nielsen) moves there with his father Claus (Ulrich Thomsen) after the death of Christian's mother and Claus' wife. The death has shattered Christian, who feels that his father's attempt to be strong for his son really indicates a lack of caring that she died at all.

The other boy, Elias (Markus Rygaard), is the son of a Swedish doctor named Anton (Mikael Persbrandt) and his wife Marianne (Trine Dyrholm), who are separated and considering divorce because Anton divides his time between home and working for Doctors Without Borders at a refugee camp in a wartorn African country. The school assholes have made Elias their favorite punching bag, mainly because he's a "Swede" in their Danish homeland. I found this concept rather shocking since I'd never heard of Danes hating Swedes, so I actually looked it up, but couldn't find any evidence of such a hatred but I did stumble upon an interview Bier gave to Roger Moore of The Orlando Sentinel where she explained this:

"We went to some pains to not deal directly with one clearly defined country or religion. I wanted the movie to be about intolerance in a more general way. We question that lack of desire to understand another person or another culture. Some people are just like that.…
“It’s kind of a joke in the movie, this idea that we don’t like Swedes. OK, maybe a little, but there is not general prejudice against Swedes in Denmark. When we show that in the movie we’re showing how stupid prejudice is, how foolish racism looks. It’s like saying, ‘Come on, we’re all pretty much alike. Swedes and Danes? Exactly alike. Look how stupid in its core racism is.’”

That little joke might be funny, but very little in the movie itself is. While the adults get the top billing (and turn in good and great performances, especially Persbrandt and Dyrholm who both give excellent turns. Thomsen, who was so great in Brothers. almost seems an afterthought at times here.

In a Better World's success rests squarely and superbly on the shoulders of the two young actors, particularly Nielsen as Christian, whose carefully modulated performance begins as a sad young boy, transforms into a heroic kid who wants to help his friend stop being a victim before he turns into someone that scares even Elias and his parents, fearful of what he might be capable of doing.

The parallels established in the screenplay by Anders Thomas Jensen (who has had a hand in most of Bier's major films), from a story devised by him and Bier, nicely matches both visually and otherwise the parallels between suburban bullies and African warlords. It teeters closely at times toward being too obvious in its message, but the script does a good job at making situations gray enough that even the nonviolent advocates begin to question if sometimes the only way to end a bully's reign and make it a "better world" is to follow the Golden Rule literally into a not-so-nice direction.