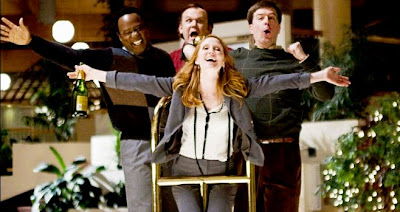 By Edward Copeland
It's hard to know where to begin describing a funny little gem such as Cedar Rapids. Certainly, more hilarious movies have been made. Granted, comedies boasting even bigger and more amazing ensembles entertained me during my moviewatching years. With the exception of Midnight in Paris though, no 2011 film has made me laugh more frequently than Cedar Rapids — then again, the last reputed comedy I saw was Bridesmaids and perhaps I just longed for something written by someone who knew how to structure a comedy and set up jokes to finally remove the taste of that piece of shit from my mouth.

Ed Helms, late of The Daily Show but a regular on The Office and charter member of The Hangover movie franchise, stars as Tim Lippe, a sheltered 34-year-old insurance agent in Brown Valley, Wisc. Tim lost his father at a young age and then his mother in his late teens. Bill Krogstad (Stephen Root), the owner of Brown Valley Insurance, thought he saw in Tim someone who was "going places," so he brought him into his agency, but Tim has never taken off. Roger Lemke (Thomas Lennon) is his company's star, bringing the agency back the coveted "Two Diamonds Award" from the annual AMSI insurance convention in Cedar Rapids, Iowa, for three years running.

As Krogstad anticipates Lemke attending and bringing a fourth consecutive award back to Brown Valley Insurance, Roger drops dead — of autoerotic asphyxiation no less. Krogstad can't attend himself because one of his daughters picked the weekend of the convention to get married, but he fears that rumors of the cause of Lemke's death could ruin their chances since the president of AMSI, Orin Helgesson (Kurtwood Smith), brings a moral and religious component to insurance. That makes the innocent Tim the obvious replacement.

Tim isn't completely innocent. He's currently engaged in his first affair with his seventh grade teacher Macy Vanderhei (Sigourney Weaver), but he's never flown on a plane and hasn't been to a city the size of Cedar Rapids. Krogstad gives Tim some tips, the most important being to avoid another insurance agent named Dean Ziegler (John C. Reilly).

Once Tim arrives at the hotel hosting at the convention, he gets hit left and right with the shocks of "the big city." He's approached by a hooker named Bree (Alia Shawkat, better known as Maeby Funke of the much-missed Arrested Development), though Tim fails to realize what she's offering. The desk clerk's request for a credit card imprint also knocks him offguard, but that's nothing compared to what happens when he gets to his room an an African American answers the door!

He calls Macy in a panic, but fortunately it's just another insurance agent attending the convention. Even better, it turns out to be one of Tim'a assigned roommates, Ronald Wilkes, and he's portrayed by Isiah Whitlock Jr. That makes it absolute heaven for fans of The Wire because if Whitlock's name doesn't ring a bell, he played the hilariously sleazy and corrupt state Sen. Clay "Sheeeeeeeeeeeeeet" Davis. Phil Johnston's screenplay even has two references to The Wire that Whitlock has said were in the script before he was cast.

Of course, they end up with a third roomie — the man Krogstad warned Tim about — Dean "Deanzie" Ziegler himself, who helps guide Tim to Sodom and Gomorrah's location in Cedar Rapids — or does he? At one point, Ronald asks Deanzie what's wrong with him. "What isn't wrong with me? I talk too much. I drink too much, I weigh too much. I piss people off," Ziegler replies. When Reilly really goes all in for a comedy, he truly dives in and he's hysterical. Ziegler definitely doesn't like how Helgesson tries to impose religion on the insurance business. "There's a separation between religion and insurance. It's in the Constitution," he insists.

The fourth member of the convention's comic quartet comes in the form of Anne Heche as Joan, nearly the female Ziegler. I didn't realize she was in Cedar Rapids and didn't even recognize her at first, but she's funny as hell too. Helms, Reilly, Whitlock and Heche combine to create an awesome comic foursome.

As if they weren't enough, Cedar Rapids also gives us the already mentioned Weaver, Root and Shawkat as well as Helms' former fellow Daily Show correspondent Rob Corddry and Mike O'Malley. I must make special mention of Kurtwood Smith. His role in Cedar Rapids isn't the funniest, but it's amazing how I always think of him as a comic actor now since I stumbled upon reruns of That '70s Show and the only reason I'll watch is the great comic work done by Smith and Debra Jo Rupp as the Forman parents. Such a switch from the days when he always seemed to be a great out-and-out villain as in RoboCop or Robert Sean Leonard's overbearing dad in Dead Poets Society.

The performers bring Johnston's first filmed screenplay to life (he's received an Independent Spirit Award nomination for it and Reilly is up for supporting actor, though I might have opted for Whitlock). Director Miguel Arteta keeps the zaniness moving (everyone involved in the turd that is Bridesmaids should watch this to learn how to make a comedy). Arteta sure has an eclectic resume, having directed episodes of TV shows as dissimilar as The Office, Ugly Betty, Six Feet Under and Homicide: Life on the Street and features such as Chuck and Buck and The Good Girl. Cedar Rapids definitely ends up being something he should take pride in having made.

Comments:
This is a funny and heart-flick flick with John C. Reilly in top-form. And when I mean top-form, I mean that almost everything he says made me laugh my ass off. Great review Edward.