And yet no one went to jail 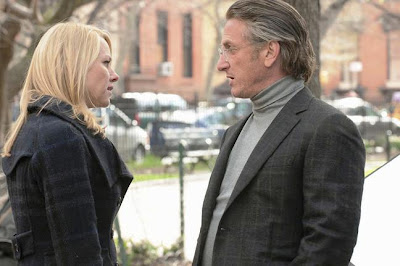 By Edward Copeland
Reliving the Valerie Plame affair in Fair Game, based on the books written by Plame herself and her husband Joe Wilson, if you didn't have any anger before over what the Bush White House did to a loyal CIA agent in the name of politics and a war they wanted no matter what the facts were, that old rage will well up once again. In Doug Liman's film, it comes up even more so because before we get to the events of the leak of Plame's covert status, we actually see what her job entailed and what the Bush politicos callously threw away for their own warped reasons and the cost it took in American lives, those of other intelligence sources and, of course, the truth. Still, no one who committed crimes (and crimes were committed) went to jail for their roles. It's outrageous and the film will make that outrage feel fresh once again.

Naomi Watts stars as Plame and Sean Penn plays Wilson (in one of his least-mannered performances) and while many of the details of the film will be familiar to anyone who watched the episode unfold in the media, what makes director Doug Liman's film most interesting are the details that were left by the wayside.

Fair Game begins by showing us Plame at work for the agency, making frequent secret trips overseas making contacts and protecting sources in the battle against weapons proliferation. Her husband knows her real job, but her friends believe she works for a phony business service. Early on, at the behest of the Defense Department, her section gets contacted to check out stories on aluminum tubes supposedly sought by Saddam Hussein and the possibility that Saddam had tried to acquire yellowcake uranium from Niger.

Never mind that the aluminum tube story had been investigated and disputed long before since the equipment was horribly outdated and unacceptable for uranium enrichment, the Bush White House pressures the CIA to check it out again. As it happens, Wilson, the last American to meet Saddam face-to-face and someone who had strong contacts with high-ranking officials in Niger, is suggested as someone who could check out the African side of the story. Plame admits her husband's expertise in the area, but that's the extent of her involvement in his getting the assignment.

Wilson takes the trip to Niger and finds that it would be logistically impossible to remove that large an amount of yellowcake from the country without leaving physical or written evidence. He returns, issues his report that the story is a nonstarter and believes that it's the end of it. Unfortunately, the Bush gang, represented especially by the unctuous Scooter Libby (played to smarmy perfection by David Andrews) are ghouls who can't say no and, much to Wilson's surprise, President Bush says those 16 words that mean so much in his 2002 State of the Union speech about Saddam attempting to acquire quantities of uranium from Africa.

Just to be certain, Wilson calls a source of his to make certain that Bush isn't referring to a different African country than Niger, but no, that's the lie that's being spun, followed by the big p.r. push from Cheney, Rice and the gang about not letting the "smoking gun be a mushroom cloud." An outraged Wilson pens the infamous op-ed in The New York Times about what he didn't find in Niger and the White House declares war on him and his wife, including outing her identity as a CIA operative in Robert Novak's column, which still is a crime.

The rest of the story should be fairly familiar to anyone who followed it, but if you've forgotten some of the details, you are certain to get riled once again (and to question the wisdom of the Obama Administration for letting sleeping liars sleep free for the crimes they committed).

Still, as well known as the tale is, Fair Game proves quite compelling thanks to a solid cast and Liman's solid direction. Of course, the true Bush believers will have no interest and partisans already will have been converted, but those who are fuzzy on the facts owe it to themselves to see this film. A little history never hurt anybody.

Comments:
"fuzzy on the facts" could be an accurate description of this movie. The Washington Post took the rare step of reviewing a movie on its editorial page and found that Fair Game "is full of distortions - not to mention outright inventions" and that 'it was long ago established that Mr. Wilson himself was not telling the truth - not about his mission to Niger and not about his wife."

I normally enjoy your site and am surprised to see you promoting this movie as accurate.

The movie was not based solely on Wilson's book, but Plame's as well. Was she also lying about her work, which would have to have been vetted before being published? In any regard, outing a CIA operative still is a crime and the various Bush cronies themselves have acknowledged that the intelligence was wrong but it made no difference to them anyway. As I said, partisans on either said already have locked in their positions but it would be helpful for those who were fed the lie that Plame was some glorified secretary. A crime is still a crime and no one is above it, whether you are on their political side or not. The movie, including the Plame character, does take Wilson to task a bit for being a spotlight seeker, which he was, but that doesn't mean he was wrong.