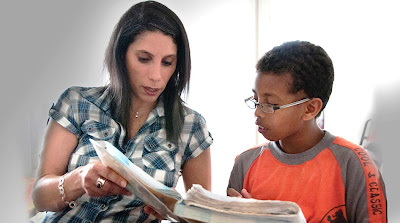 By Edward Copeland
When I was a wee little movie buff, isolated in a terrible town without friends let alone fellow film fanatics, trying to guide my own way through the best that cinematic history had to offer when the idea of home video rentals had just begun to catch on, I turned to the only "arbiter of quality" I knew at the time — the Academy Awards. Of course, as I aged, escaped my exile and realized how often Oscar equaled mediocrity, my viewing choices expanded. Still, until this day, I make it a habit of trying to see all their nominees, only now I'm just as interested, if not more interested, in their documentary categories.

Usually, the documentary feature nominees and winners turn out to be readily available for viewing, but when you get to any of the short categories — documentary, animated or live action — it has, until recently, remained almost impossible to see any of them. Tonight, at 6:45 p.m. EST/PST and 5:45 p.m. CST, HBO will premiere the 2010 Oscar winner for best documentary short, Strangers No More. Also thanks to HBO's multiple channels and its HBO GO service, I have been able to see three of the other documentary shorts that were nominated alongside Strangers No More. It's a new development for me to say that I've seen four of the five nominees in a documentary short category. Granted, I didn't see The Warriors of Qiugang, but of the four nominees I did I can say that the wrong short documentary won — but what should you expect? It's the Oscars — remember what they gave best picture and best director to at that same ceremony.

While each year many of the most compelling movies I see end up being documentaries, that doesn't mean that nonfiction films possess immunity from formula — or that a structure common to many films in their genre (Is that the right word? Can you call documentaries a genre?) prevents the films from being excellent. Strangers No More's subject seems particularly fertile ground for a decent documentary, though it fails to produce a satisfying look at the Tel Aviv school at the center of its story.

Bialik-Rogozin functions as more than a mere public school in Tel Aviv, Israel — it not only teaches the students who attend but serves as a refuge for many. The school, you see, puts out the welcome mat for students from 48 countries and all religions — Jews, Muslims and Christians — quite a feat for a school housed in the Middle East. When I referred earlier to documentaries being as susceptible to formula as fictional films, it seems that when a documentary chooses to focus on something — a place, a contest, whatever — the magic number inevitably ends up being three. So, as with the great and greater HBO feature-length documentaries earlier this year, Love Crimes of Kabul and Koran By Heart, Strangers No More picks three particular students to follow in its study of a school year at Bialik-Rogozin.

Karen Goodman & Kirk Simon, who co-directed and co-produced Strangers No More, shine their spotlight on:


The one non-student who the film spends the most time with is Smadar Moers, one of the teachers at the school who specifically instructs the many students new to Israel how to read, write and speak Hebrew with 21 hours of classes a week. In perhaps what's the highlights of Strangers No More, Moers ends up working closely with Johannes and his father, first when it is discovered that Johannes is nearly blind in one eye and later when his dad frets over being kicked out of the country when his work visa expires. Johannes' problem gets resolved with glasses that not only help but make him a student able to aid others new to the school. His father's problem leads to one of the few laugh lines of the movie when he tells Moers how much he wants to stay in Tel Aviv because he always has hoped of living someplace "peaceful" prompting the teacher to ask the man if he realizes where he is.

Unfortunately, those good moments prove rare in Strangers No More. This would be such a rich subject that making it a short hampers its impact. When I recently wrote about three different fictional films hoping to land in the best live action short competition, each told its story in running times that ranged from six minutes to half an hour in length. In the case of Strangers No More, approximately 40 minutes to cover a school year ends up making the film feel truncated and prevents you from getting to know all the students it follows and the school itself that well.

It isn't as if worthwhile documentaries can't be accomplished in 40 minutes. Of three of the films that Strangers No More beat last year for the Oscar, none felt as rushed and of those three (Killing in the Name, Poster Girl and Sun Came Up), Poster Girl (which just won the International Documentary Award for best short documentary this past weekend) is so clearly heads-and-shoulders above the other three documentary shorts in terms of quality, how it didn't win would boggle my mind if I weren't so used to the Academy being wrong so often. Poster Girl is on HBO GO through September 2012. Killing in the Name and Sun Came Up are on HBO GO through December 2012.

Strangers No More premieres on HBO tonight at 6:45 EST/PST and 5:45 CST and will play at various dates and times on HBO and HBO2 through Dec. 30.