Spending time in a psychopath's head 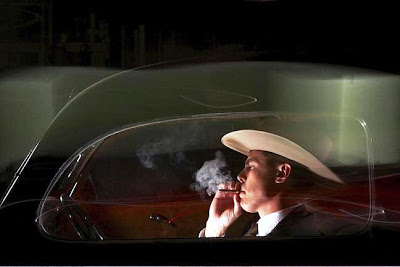 By Edward Copeland
With two anniversaries of adaptations of Jim Thompson novels and a new film based on another of his books released this year, I've spent a lot of time in the crime author's milieu, reading the three novels the films were based on this year. Michael Winterbottom's 2010 version of The Killer Inside Me (a 1976 version starred Stacy Keach) came and went this year without much notice despite some good reviews and the fact it might be the most faithful Thompson adaptation put on screen.

Given that the title itself serves as a spoiler or sorts, readers can expect that plot points will be given away freely from this point on. Casey Affleck stars as Lou Ford, deputy sheriff in a small west Texas town, who has managed to lived there for most of his life hiding the uncontrollable sociopath within himself.

Now, this isn't another serial killer story. When Lou strikes, he always has a reason, at least within his own warped mind, but when the town's powerful construction magnate Chester Conway (Ned Beatty) asks Lou to run what he considers to be a loose woman (Jessica Alba) out of town because of her involvement with Conway's son Elmer (Jay R. Ferguson), it sets in motion a course of events that unleashes all the demons living inside Lou that he'd more or less successfully kept hidden from his friends and neighbors. Unfortunately for Lou, the chain reaction proves too long and messy for him to hide his true self from them any longer.

As I mentioned, this has been a Jim Thompson kind of year for me. Earlier this year, I revisited After Dark, My Sweet on its 20th anniversary and in two days I will do the same for The Grifters on its 20th. On one of the DVD extras of The Grifters, its late screenwriter and a crime novelist in his own right, Donald Westlake, mentioned that Thompson was the most nihilistic of America's second generation of crime novelists. Based on the small sampling of Thompson I've read or seen, Lou Ford may be his darkest creation.

The first inkling viewers get of Lou's "darkness," other than his inner narration, comes when he encounters a bum (Brent Briscoe) on the street and instead of offering him some change or even a smoke or some booze, Lou takes his cigar and, grinning widely, burns it into the flesh of the man's hand. He also fails in his mission for Chester Conway when he goes to the woman, Joyce Lakeland (Alba), who turns out to be a prostitute, starts to get rough with her, but instead ends up falling into bed with her and beginning a fling, despite his long involvement with the sweet Amy Stanton (Kate Hudson).

Both the book and the movie take an unusual tact because it isn't often that you hear a story from the point-of-view of a killer. The book provides a few more details as to what made Lou that way, but I'm always one who prefers it when the cause behind a psychotic's spree remains mostly a mystery. It's really unnecessary to know the motive when the violence occurs as suddenly and brutally as it does here. In fact, some of Lou's acts seem to come out of nowhere with so much force, even when you've read the book, that it still shocks.

What separates this Jim Thompson adaptation from After Dark, My Sweet and The Grifters is that it keeps it firmly set in the time period in which the book was set. It also boasts a fine cast. In addition to Affleck's superlative work, there's solid support from Beatty, Hudson, Briscoe, Elias Koteas as a suspicious reporter, Tom Bower as the unsuspecting sheriff, Simon Baker as the district attorney and Bill Pullman in a single scene as a defense attorney.

The Killer Inside Me also held extra interest for me since a great deal of it was filmed near where I live, so I recognized many of the sites. Winterbottom moves John Curran's sparse and faithful adaptation at just the right pace and really knows how to give the viewer a kick. It's one of the better efforts from such an eclectic director. It's a shame it didn't gain more notice when released.

Comments:
Wonderful look at this film, Ed. It really didn't get much of a release (perhaps, it was for the violence against women in the story that many news reports cited). But, I will be checking it out soon based on your fine review. Thanks for this.

If I hadn't read the book first and been prepared for it, the violence he inflicts against the women would have bothered me more, but it's not as if they are trying to present him as a hero or doing it in a way that the audience gets off on it the way the sadistic scenes in The Girl With the Dragon Tattoo really disturbed me.