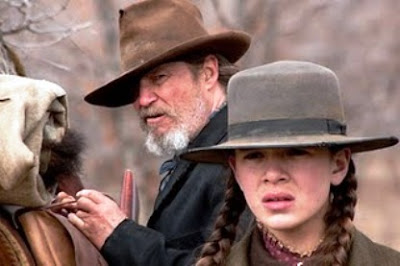 By VenetianBlond
True Grit is the film the Coen brothers make when they're not cracking jokes. It's a straight-up Western, no chaser, and it's head and shoulders above most Hollywood offerings these days. That doesn't mean it's ingenious, however. It doesn't tell us much more about the human condition than we already knew, and I'd posit the same about at least one of the performances. Jeff Bridges nails it as Rooster Cogburn? I'm not sure that was ever in question. But just because we know the stars are up there in the sky, and a good part of why, doesn't mean we don't enjoy looking at them. The same is true of True Grit.

Young Maddie Ross' father is gunned down in cold blood. Her mother is "indecisive and hobbled by grief," and the perpetrator has fled to Indian lands where most law enforcement has no jurisdiction. She is advised to find a U.S. marshal to track Tom Cheney, the murderous hired hand. After hearing the pedigrees of a number of options, she settles on Rooster Cogburn, the orneriest of the ornery, although she is advised he "does like to pull a cork." She also gets into a heated negotiation with a horse trader over ponies her father had recently (unwisely) purchased, and comes out with a good mount for herself and a pocketful of cash with which to get Cogburn's attention. She also attracts the attention of a Texas ranger (Matt Damon), whose fine duds match his runway-ready face. He's been pursuing Tom Cheney himself for a long time, and Maddie points out to him that means he's not terribly effective.

The young actress playing Maddie, Hailee Steinfeld, is getting a lot of attention and deservedly so. She handles the role with the single-minded focus of her character. According to the Coens, thousands of young actresses fell out of the race due to the fact they couldn't handle the necessary heightened language. Hailee not only handles it, she thrives on it, creating an admirable young heroine. One would also suspect she is not a lot of fun to be around. That's a tricky balance to pull off.

This is a remake of the John Wayne film, so the plot is fairly well known. They set off with Texas Ranger LaBouef, separate, run into others on the trail, fall in together again, and finally do encounter Cheney, who has joined the Lucky Ned Pepper gang. Cheney is played by Josh Brolin, and one might wonder why such a big name gets so little screen time. His casting, and his performance, demonstrates the truly chilling fact that the good guys do not always battle evil genius. Sometimes it's merely a regular someone, or even a half-witted someone, as Maddie says, who can get away with horrible things just out of blind luck.

The film is set up as Maddie's retrospective. It opens with her voiceover as an older lady, and there is an epilogue in which the older Maddie attempts to find Rooster. How well this works depends on the reading of the film. In my view, it's appropriate because the Coens highlight the film's world as a different place and time, and they separate the modern viewer from the work. The language is very precise and self-consciously constructed. A good portion comes directly from the book and it serves the same purpose as the language in Deadwood. Whether or not it is actually reflective of the speech patterns they actually used in those times and places is not as relevant as the fact that it's very different from how we use it today. In fact, rather than being naturalistic, the language is used to underline action we already see — "I extend my hand." Although it's definitely Maddie's story as told from her memory, it's not filmed strongly from her point of view.

That mentioned, it also is a realistic portrayal of the Old West — the violence is surprisingly quick and nasty, the air is cold, the ground is hard and the open country is awe inspiring. The Coen brothers know how to make a movie, that is clear. It's just a matter of how accurately they aim their "carbine." They've taken on the Old West, and aimed true.

Comments:
Nicely written piece. I think you're absolutely right about TRUE GRIT... except for one thing.

I disagree that the film is "not filmed strongly from her point of view." I think the film is totally filmed from her point of view. With the the exception of the opening shot (which features her narration over it), not only is Mattie in every single scene of the movie, but the camerawork is almost entirely from her perspective. Whether we're perched atop a tree branch while Rooster converses below with a stranger, peering down at the four crooks trying to hog-tie the Texas Ranger by the cabin or trapped down inside the pit with snakes, we (the audience) only ever see/experience things the way Mattie did.

I'll agree with you and add a bit. The separation that I was getting at is that I didn't feel that I knew how Maddie felt about what was happening. I knew how *I* felt about the four going at LeBeouf, but we don't get much about how Maddie feels about it. Perhaps the addition of the word "emotionally" to the sentence in my original post would clarify.

I could be undermining my own argument, because Maddie is so focused, so practical, what would she be "feeling" anyway?

Really great. I thought the original was fine, but this blows it away on every level and it's a crime to push Steinfeld as supporting. She's lead.

I thoroughly enjoyed this one. I'm with you, Ed - the 1969 was fine, but it was basically just The John Wayne Show; this is a full-blooded, fleshed-out film, not just a platform on which to perch a Rooster. As a sidenote, if you were to solely limit eligibility for this year's Best Actress category to people under the legal drinking age, you'd still wind up with a pretty strong lineup.

The category fraud for Steinfeld upsets me, because it's even more blatant than the infamous Tatum O'Neal misclassification for Paper Moon. O'Neal was more or less in every scene of that film, but so was her Dad. Really, Bridges is not much in evidence for the first 20 minutes or so of True Grit. They're both leads, but it's the kid who carries the film (and Bridges rather graciously allows her to steal it.) The Academy summarily rejected the idea that Kate Winslet was supporting in The Reader, regardless of what SAG, The BFCA and the HFPA did. Here's hoping they don't fall for this scam either.

BAFTA didn't fall for it and put her in lead today, so maybe the Academy will follow suit.