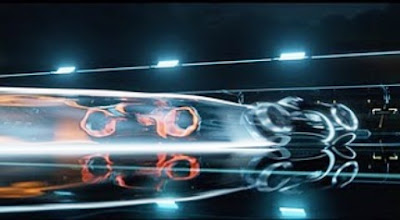 By J.D.
It has been more than 25 years since Tron (1982) was released in theaters. Made on the cusp of the home computer revolution, the film was a simple good versus evil parable that saw a disgraced computer programmer hack into the network of the corporation that fired him only to be zapped into cyberspace where he got to see how the other half lived. Tron was a modest success at the box office and resoundly trashed by critics. It seemed destined to become merely a footnote in cinematic history as one of the earliest examples of computer graphics in a Hollywood film. Over the years, it developed a decent cult following who dreamed of a sequel some day. That day has finally come.

Hoping for a lucrative franchise that doesn’t involve pirates, Disney ponied up a considerable amount of money so that the filmmakers of Tron: Legacy (2010) were able to utilize the same kind of 3D digital cameras that were used to make Avatar (2009) and the CGI technology used to age Brad Pitt in The Curious Case of Benjamin Button (2008). And, in keeping with the original filmmakers hiring cutting edge composer Wendy Carlos, Tron: Legacy features an atmospheric score by hip electronica music duo Daft Punk. The end result is a stunning assault on the senses.

In 1989, hotshot programmer and CEO of Encom Kevin Flynn (Jeff Bridges) disappeared, leaving his young son Sam with his grandparents and no indication as to why he left. Since the death of his wife four years before, Flynn’s behavior had become increasingly erratic and he had become obsessed about a brave new world, a digital frontier that he had experienced in Tron. Sam (Garrett Hedlund) grows up to become a rebellious chip off the old block as he breaks into Encom just so he can publicly embarrass the company’s current CEO. Since Flynn’s absence, Encom has returned to its old, soulless ways much to the chagrin of his longtime friend and current board member Alan Bradley (Bruce Boxleitner). He informs Sam that he got a page from his father at the office in his old arcade.

Long shuttered and collecting dust, it is a cemetery for classic arcade games. Sam uncovers his father’s personal computer and before he knows it, he’s zapped into the computer world. Flynn’s prized program Clu (also Bridges) has taken over and rules the computer world with a fascist, iron fist. Flynn has become a fugitive and it’s up to Sam, with the help of a program named Quorra (Olivia Wilde), to make things right again.

Rather fittingly, the real world footage is shot in 2D but once we enter cyberspace, the film comes vividly to life with cutting edge 3D technology. Much of the iconography from the first film is present — the disc battle, light cycles, etc. — but amped up with The Matrix-like action sequences and three-dimensionalized. If there was ever a film would that begged to be given the 3D treatment it is this one. The filmmakers have basically taken the imagery of Tron and cranked it up to 11 — pure, unadulterated eye candy with things like dialogue and characterization taking a backseat. The attention paid to production and art design is phenomenal with all kinds of neon-drenched landscapes full of ambient sounds that will keep architecture buffs busy for years. That being said, the CG to recreate a younger version of Jeff Bridges, circa 1982, is distracting with its waxy, stiff look and dead, lifeless eyes, which, I guess, is appropriate for what is basically an evil clone of the real deal within the film.

Say what you will about the original Tron and its flaws but at least it was anchored by a playful and charismatic performance by Jeff Bridges who acted as the audience surrogate into a strange, new world. This time around, Garrett Hedlund takes on that role with limited success. The uninspired screenplay doesn’t do him any favors and so he does the best with what he was to work with, which admittedly isn’t all that much. Bridges plays a grizzled, burnt out version of his original character and with his beard and long hair it almost seems like the Dude from The Big Lebowski (1998) was zapped into the computer world. As if sensing this, Bridges even lets out a few Dudeisms at certain key moments in the film, which at least livens up the forgettable script.

Noted British actor Michael Sheen even shows up channeling David Bowie’s Ziggy Stardust persona as Castor, a preening, flamboyant host of a nightclub where Daft Punk have a cameo as DJs. Using these musicians to do the score for Tron: Legacy was a masterstroke and they seem like the logical evolutionary step from Wendy Carlos. However, those fans expecting them to recreate their trademark dance music maybe disappointed as they opt for a more orchestral score that at times is reminiscent of early 1980s John Carpenter, in particular Escape from New York (1981). Their finest moment comes during a battle at Castor’s club where Daft Punk gets to really show off their musical chops as they segue from ambient music to pulsating dance music to bombastic beats that accompany with the action. Along with Trent Reznor and Atticus Ross’ score for The Social Network (2010), this may be the best soundtrack of the year.

Tron: Legacy replaces the “information just wants to be free” message of its predecessor with a “sins of the father” theme as Flynn attempts to stop Clu, his Frankensteinian creation, and repair the damage done between him and Sam. Tron: Legacy manages to make this world and its characters accessible to those not familiar with the first film by basically rehashing its plot, blow-by-blow, which may disappoint fans. However, it does feel like a continuation of the first film with all kinds of references to things that happened in it. There is also a rather nifty cameo by a notable character actor that hints at a possible villain for the next film, if this one makes enough money. Of course, there is the usual criticism that the dialogue is weak, the story is formulaic and there is a real lack of characterization — all issues critics had with the original film. Tron: Legacy certainly lacks in these areas also, but like the first film, the visuals are so impressive, so captivating in the way they immerse you in the computer world, that you tend to ignore the flaws, relax and enjoy the ride.

Comments:
Fine review of this, J.D., and I'm in agreement with your thoughts. You can see where Disney is setting this up for franchise. Wasn't Michael Sheen so much fun chewing the scenery as Castor? And lastly, boy-howdy does the camera love Olivia Wilde! Every moment she's on screen you cannot keep your eyes off of her. Naturally, my teen wanted to see this immediately again, afterward. Thank you J.D. and Ed.

You are welcome! Yeah, it should be interesting to see how this film plays out once the kids are out of school. Visually gorgeous film if light on substance. But that's ok. I wasn't expecting anything more.

I have no interest in this movie, but if it keeps Olivia Wilde off House where I can't stand here, I feel it's provided a public service.