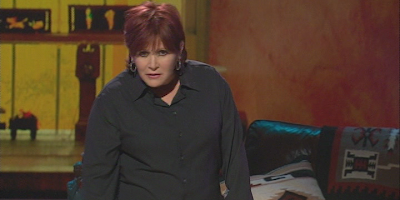 By Edward Copeland
Back in the old days, when Dennis Miller used to be funny, one of his favorite lines of mine was when he paraphrased Nietzsche and said, "Whatever doesn't kill us only makes us funnier." That certainly applies to the life of Carrie Fisher whose one-woman show Wishful Drinking will premiere tonight on HBO as part of their HBO Documentary Film series.

Fisher still tours with the show which had a run on Broadway at the Roundabout Theatre Company's Studio 54. though it has been shortened for television. Basically, it's just a somewhat stream-of consciousness journey through the events of her life and what a life she's had, almost from the moment she was born to two stars: the movie star Debbie Reynolds and the pop singer Eddie Fisher.

During her birth the doctors were so fascinated with Reynolds and when baby Carrie appeared, Fisher fainted and all the nurses went to attend to him and Carrie was born virtually unattended. As Carrie says, Wishful Drinking is her pathetic bid for attention to make up for the lack of attention she received at birth.

Filmed three months before the death of her father, one of the funniest bits is when she brings out a chalkboard to try to explain all the various relationships and scandals connected to her through her relatives because her teenage daughter was thinking of dating the grandson of Michael Todd, Liz Taylor's husband who died in a plane crash and who preceded Eddie Fisher in Taylor's matrimonial parade, and the two young people were trying to figure out if they might be related somehow.

Another highlight, as one would expect, comes when Carrie talks Star Wars. (Some of her friends thought the title referred to a movie about the breakup of Eddie and Debbie.) "George Lucas ruined my life," Carrie says. "I mean that in the best possible way." She tells how she and the other members of the cast still get asked if they knew it would be a hit and she says yes and that the only person who didn't know was Lucas and they kept it from him just to see if his face would change expression, only he fooled them by having ILM change his expression for him.

She also blames the British drama school that her mother sent her to prior to her casting in Star Wars as the reason for her pseudo-British accent as Leia that comes and goes during the first film. There's also discussion of her relationship with Paul Simon (I didn't realize which of his songs were written about her or their relationship) and her second marriage to a man who turned out to be gay and left her for another man.

On more serious notes, she finds the humor in her bouts with addiction and manic-depression, including electroshock treatments. How entertaining you find the evening will depend on how much you enjoy the fun of watching a celebrity mock true gossip. Wishful Drinking premieres on HBO at 9 p.m. Eastern/8 p.m. Central tonight.

Also available On Demand is an interview with Debbie Reynolds discussing her daughter, which proves quite touching as she's still the well-put-together star at 78 discussing her daughter's problems and her wish that she'd taken up singing and her pride when she hears a recording of Carrie singing "Happy Days Are Here Again" which opens and closes the show.

Comments:
I saw her perform this when her tour came to Seattle--and I'm so glad it's got a wider distribution through HBO. Delightfully gossipy, maniacally funny, and sweetly reminiscent all at the same time--it was one of those few shows where I felt truly disappointed because it was over. Although it's stream-of-consciousness in style, the writing is razor sharp and different motifs reappear. "If you ever have a chance for Paul Simon to write a song about you, DO IT!" Since then, Carrie Fisher has been on my if-you-could-have-a dinner-party-with-anybody-who-would-you-invite? list.