Sometimes you need some mind candy 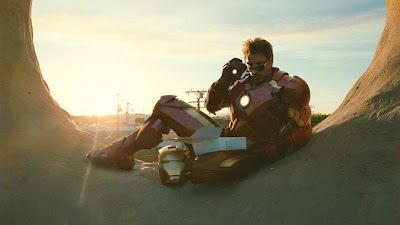 By Edward Copeland
Though I saw it during one of the blog's hiatuses and didn't review it, I really enjoyed the first Iron Man. Based on the reviews, I expected a little less from its sequel, but damn if I didn't enjoy Iron Man 2 just as much as the original. This is my kind of mindless, comic-book inspired entertainment: sleek, funny, well-acted and just the right length, resisting the urge of so many action films to pad their running times.

As in the first film, the key to its success is Robert Downey Jr. as weapons magnate turned peacenik/Iron Man. He's charming, witty and really has more personality than any other superhero in the history of superhero screen incarnations. He's rich and fun loving, still loves to knock back some drinks or to race in the Monaco Grand Prix and he gives very entertaining witness testimony at a Senate hearing. (If Downey weren't enough to make the scene a blast, they cast Garry Shandling as the jackass senator to ensure that the sequence is a hoot.) Stark may save the world, but he doesn't mope like Batman, he's not perfect like Superman and you know he's having a good time saving the world and probably getting laid as well.

When it was announced that Jon Favreau was directing the first Iron Man, it was viewed as an odd choice, but really Favreau, who repeats those duties here as well as playing Stark's driver, makes perfect sense. He's the man who wrote Swingers and the Tony Stark character as portrayed by Downey is so money and he knows it, only he's not a pretender as Favreau and Vince Vaughn's characters were in the film that begat that phrase, Stark's the real deal.

Ironically, in another funny performance, the would-be "swinger" of Iron Man 2 is Sam Rockwell playing rival weapons magnate Justin Hammer who dreams of living the Stark lifestyle, both businesswise and otherwise. He's the corporate villain of the movie, but he's just as funny. In fact, the action scenes when they happen, though they deliver, mostly are by the numbers. It's the comic tone that makes this series so much more fun than the brooding or goody-goodness of the others in this genre.

Terrence Howard has been replaced in the role of Lt. Col. James Rhodes by Don Cheadle and while Howard is a fine actor, Cheadle actually is an improvement because he has an innate levity that Howard doesn't so he meshes better with Downey and the rest of the cast.

Of course, the real villain of Iron Man 2 is Mickey Rourke as Ivan Vanko, a Russian physicist whose family feels ruined by Stark's father (the great John Slattery, who only appears in old film footage — and with brown hair!) and vows to seek revenge on Tony Stark, a task Hammer unwittingly helps him to carry out while he thinks he's using Vanko to gain an edge in the arms business.

There also is a story strand involving Samuel L. Jackson as Nick Fury, which I guess has something to do with a league of comic-book heroes called The S.H.I.E.L.D. that Stark's father helped to form and The Avengers Institute (though I don't think it involves Emma Peel), but I'm not up on my Marvel history to know that backstory, though it hardly matters. However, Jackson does deliver Fury with the same vocal cadence he used as Jules in Pulp Fiction.

Still, there isn't a weak link in the cast which includes Gwyneth Paltrow, who I tend not to like outside of The Royal Tenenbaums. If this weren't a sequel to a comic-book adaptation, saying it deserved consideration for ensemble acting awards would be taken seriously.

Justin Theroux wrote the screenplay and also came up with the story for Tropic Thunder, but many may know him best as an actor, especially for his roles in David Lynch's Mulholland Drive and as Brenda's neighbor on HBO's Six Feet Under.

I tend to frown upon endless sequels in series. I liked the first two X-Men movies, but the third one stunk and I didn't even bother to see Wolverine. Still, I had so much fun turning off my brain and enjoying both installments of Iron Man, I wouldn't object to another even though I know the odds are against a third time being a charm.

Comments:
thanks the info
Fill in really good article I really like the articles on this blog.

Handshake Greeting Brotherhood Of Us.