By J.D.
Before Bridget Jones’s Diary (2001) was released in theaters, much was made of the casting of soft-spoken American (from Texas no less!) Renee Zellweger as the very British Bridget Jones. It was seen as almost heresy by fans of Helen Fielding’s very popular book of the same name. To almost everyone’s surprise, Zellweger pulled it off with a credible British accent and a real commitment to the role (she even put on weight).

Bridget Jones (Renee Zellweger) is a sworn bachelorette. She has her family and friends but despite her defiantly single stance the biological clock is always ticking. Bridget finds herself looking for Mr. Right. She does fancy her roguish boss, Daniel Cleaver (Hugh Grant), but also finds herself strangely drawn to the repressed and distant Mark Darcy (Colin Firth).

Bridget is not some ultra-thin model (or “American stick insect” as she calls the glamorous New York City career girl that Daniel cheats on her with) type but a full-bodied woman who sometimes acts awkward in social situations, including showing up to a party dressed like some kind of Playboy bunny. Bridget is instantly relatable and immediately gets our sympathy. We care about what happens to her and become emotionally invested in her and her world. The film’s screenplay, co-written by Fielding and the usually reliable Richard Curtis (Love, Actually), offers all kinds of astute observations about single life and the pressure society and the media puts on us to find a mate and get married. Not to mention, the film is insanely quotable with many, many memorable bits of dialogue.

Renee Zellweger is willing to put herself out there, successfully embodying this British phenomenon. She is also willing to look silly and poke fun at herself. However, the way she is lit and the warm colors that surround her, highlight Zellweger’s luminescent, beautiful pink skin. Director Sharon Maguire champions her voluptuous physique and doesn’t hide how she looks. There are lingering shots of Bridget getting dressed, which is refreshing in this day and age. Zellweger is Bridget Jones and looking back at the film several years later, one would be hard pressed to think of anyone else in the role.

After being type cast as the meek nice guy in films like Notting Hill (1999) and Mickey Blue Eyes (1999), Hugh Grant was cast against type as a raunchy cad. It gave the actor a chance to poke fun at his own image and it gave his career a much-needed shot in the arm, allowing him to branch out and play more flawed characters, such as his wonderful turn in About a Boy (2002). At the time, Colin Firth was period piece guy. He shot to success as the thinking women’s sex symbol in A&E’s production of Pride and Prejudice (1995) and Bridget Jones firmly established him on the contemporary pop culture map. At first, Mark seems like a stuck up, cold fish but over the course of the film his true feelings for Bridget become apparent. Firth has an uncanny ability of conveying repressed, unrequited feelings. It’s all in his eyes, which are very expressive.

With the commercial and critical success of Bridget Jones’s Diary a sequel was inevitable. Helen Fielding, creator of the character, even wrote one but the problem became, how do you replicate the magic of the first film and yet make it different enough not to be just a retread of what came before? Renee Zellweger reprised Bridget in The Edge of Reason (2004) but was it worth the effort?

Bridget and Mark are still a couple in a happy relationship. However, as she writes in her diary, “What happens after you walk off into the sunset?” It is this nagging question that will cloud her judgment. Daniel Cleaver is now a TV personality and as rudely funny as ever. On his show he describes the Sistine Chapel as the “First example in history of poof interior designer gone bonkers.” Trouble arises when working class Bridget feels out of place in Mark’s affluent, upper class world. To make matters worse, she starts to feel pangs of jealousy towards one of Mark’s beautiful co-workers, Rebecca (Jacinda Barrett). Her gorgeous looks and casual familiarity with Mark makes Bridget nervous and jealous. How can she compete with a thinner, smarter, more attractive woman? This leads to issues such as marriage and children to raise their ugly heads and cause a rift and ultimately split-up Bridget and Mark.

The big problem with this film becomes apparent early on. In the first one we were laughing with Bridget. In this one we are now laughing at her. For example, she skydives for her morning TV show and lands in a muddy pigpen. The segment ends with a gratuitous shot of her dirty behind. The Edge of Reason also recycles many jokes from the first film. Mark and Daniel get into another knock-down, drag-out fight. The film also relies too much on physical humor. For example, Bridget falls off the roof of Mark’s flat. Finally, she falls off a ski lift. See a pattern developing? The film takes a gag and proceeds to beat it into the ground until it isn’t funny anymore. 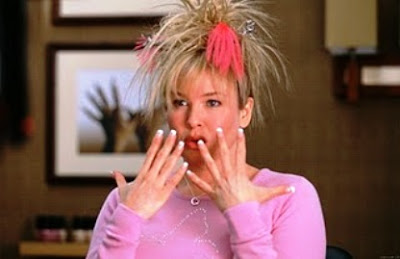 The chemistry between Zellweger and Firth is still strong. They make a great couple and clearly have a good rapport. Zellweger gamely puts on the pounds again and certainly has a knack for physical and verbal comedy. But the film places too much emphasis on the former and not enough on the latter. However, Hugh Grant is a breath of fresh, smarmy air as the roguish Cleaver. He openly leers at any good-looking woman and casually insults people with his scathing wit. The film only comes to life when he’s on-screen.

Bridget Jones’s Diary is much more than just the quintessential single woman’s survival guide. It is a funny and engaging romantic comedy that champions a more realistic image of women. Bridget Jones is the photo negative of the Sex and the City women. She is not like them, with their perfect shoes and witty repartee. Bridget would be watching that show and not be on it. And this is part of the appeal of the film (and the book) to the average woman. That being said, The Edge of Reason is merely a pale imitation of the superior original.

Comments:
Brava! I love this and shared with several others :)