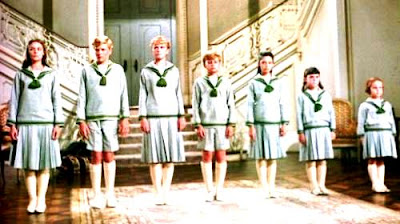 By Josh R
In the fourth grade, we were required to write book reports — we’d have to read a book, summarize it and say what we liked or didn’t like about it. Not being a particularly literary type of child, I always used to wish that we could write book reports for movies; I was completely ignorant to the existence of film criticism, and consequently thought I had come up with an original idea (when you're 9, you tend to think everything is an original idea.)

I was thinking back on this as I watched a movie I’d seen many times before. I know how I’d review it now, as my more evolved, rapidly aging self — but how, I wondered, would I, as a 9 year old, have written a “movie report” on what I was seeing? To that end, I’ve attempted a simulation, trying to channel my fourth-grade self (which isn’t difficult, since emotionally I, like Guido Contini, am still 9 years old) to see what kinds of things I might have to say. It’s not an entirely successful experiment — I suspect my adult self has intruded to some degree — but I think the results actually are quite intriguing.

THE SOUND OF MUSIC

The Sound of Music is about a nun-in-training named Maria, who is British and can’t stop singing. She sings a song on a mountain about how much she loves music. A church bell lets Maria know that she is late for mass. She runs down the mountain. Meanwhile, back at the Abbey, The Mother Abbess talks to some other nuns about the fact that Maria is a problem. The nuns can’t decide whether Maria is adorable or the antichrist and they sing a song about it. When Maria returns, she explains to the Mother Abbess that her need to be constantly singing is a form of obsessive compulsive disorder which she is unable to control and begs to remain at the Abbey. The Mother Abbess is sympathetic, but explains that she is kicking Maria out anyway, whether she likes it or not. She is sending Maria to work for Captain Von Trapp, a widower who hates Nazis. Since Captain Von Trapp is also a Catholic, he does not believe in birth control, and has seven children. It is explained that the Captain’s wife has died of an overtaxed uterus and that Maria will be the children’s governess.

Maria sings about being nervous and then about not being nervous, because she is plucky and has a sunny disposition. She sings for hours and hours as she makes her way to the Von Trapp house. She is thrown off of a bus because she will not stop singing and has to walk the rest of the way. Once she gets there, she meets the Captain, who is handsome but mean. She meets the children, most of whom do not resemble each other at all, and exhibit signs of sociopathic behavior. The children are bent on destroying Maria. They give her bad advice, put a frog in her pocket to make her scared and later a pine cone on her chair in an attempt to cripple her. Maria uses Catholic guilt to make the children feel bad about themselves, and makes them all cry. Meanwhile, the oldest Von Trapp daughter, Leisl, is in love with a Nazi named Rolf, with whom she dances and makes out with in a gazebo.

Even though some of them are teenagers, all of the Von Trapp children are pathologically afraid of thunderstorms and run to Maria for comfort even though they mostly don’t like her yet. Maria invites all of the children, including an adolescent and prepubescent boy, to get into bed with her. She then sings about her favorite things and they all have a pillow fight. The Captain is not amused, and scolds Maria. Maria is upset and, as a form of revenge, resolves to embarrass the Captain by forcing his children to wear upholstery fabric in public. The Captain leaves for Vienna to see his girlfriend, and Maria makes the children clothes out of drapes. They have a field trip to Salzberg and ride in a horse drawn carriage, and then in a choo-choo train. The children grow to love Maria, and under her care, quickly acquire advanced musical theatre skills. Only the youngest is tone deaf.

The Captain returns to Salzberg with his friend Max, who is a music producer, and his girlfriend, Baroness Schrader, who has false eyelashes and is a bitch. When they arrive at the house, they cannot find Maria or the children, until they see them in a rowboat. Maria gets hyper at seeing the captain and the rowboat capsizes, but none of the children drown. The Captain is angry and scolds Maria for not obeying his instructions. Maria tells the Captain that he is a terrible father. The Captain fires Maria, but then hears his children singing and decides that he likes her after all and that he wants to be a good father. Maria and the children put on a puppet show called The Lonely Goatherd, in which peasants consume alcohol and people and farm animals copulate. Everyone considers it charming. Max thinks he can make recording stars out of the children, or possibly get them a sitcom, replacing Maria with Shirley Jones, but the deal falls through because he and the Captain cannot agree on a profit-sharing arrangement, or so it is implied. The Captain sings Edelweiss.

The Captain has a party because he wants his friends and neighbors to meet his new girlfriend. He and Maria dance to a classic Austrian folk dance, which is actually The Lonely Goatherd played at a slower tempo. Maria and The Captain stare longingly at each other. The children do a cuckoo clock routine for the party guests, in which the boys reveal themselves to be effeminate, and the youngest girl reveals herself still to be tone deaf. The Baroness tracks down Maria in her underwear, and tells her that she knows that Maria is in love with the Captain and that the Captain thinks he’s in love with her, but that he will get over it. Maria is ashamed, because she thinks that she is cheating on God. She sneaks out of the house to go back to the Abbey, and there is an intermission.

After the intermission, the children are depressed because the Baroness doesn’t sing and makes them play dodgeball instead of arranging and choreographing musical routines for them to do. They decide to visit Maria at the Abbey, but can’t get in to see her. The Mother Abbess asks Maria to confide in her. Maria reveals that she has feelings for The Captain, but thinks that they are wrong and wants to be made a full-on nun right away to try and deny her urges, just as if she were a priest. The Mother Abbess sings an inspirational song, in which she encourages Maria not to be afraid of sex. She tells Maria that if it’s a choice between being a bride of Christ and hooking up with the handsome rich guy, God will understand if she goes with the handsome rich guy. Maria decides to go secular.

The children are happy that Maria is back and Maria is happy too, until she learns that The Captain is engaged to The Baroness. She tells The Captain she will stay until arrangements can be made for a new governess. The Captain decides he would rather be with Maria, who is a younger than the Baroness, has her own eyelashes, and is not a bitch. Also, he is in love with her. He and Maria confess their love for each other and they make out in a gazebo, which is the main function of the gazebo for all members of the Von Trapp family. He asks Maria if there is anyone he should ask for her hand in marriage. Maria responds that they should ask the children. We never learn whether or not all of the children said yes, or if consent was obtained by majority rule with some dissenting votes cast.

Maria and the Captain get married and go on their honeymoon. While they are away, Hitler takes over Austria. The Captain doesn’t want to be a Nazi, so he and Maria decide to move to Switzerland, which is neutral and has good chocolate. The Nazis don’t want The Captain to leave and try to stop him. Fortunately, Max has arranged for the family to perform in an outdoor concert. The Von Trapps distract the Nazis with their singing and cuteness and escape to the Abbey. While hiding in an outdoor graveyard, they are discovered by Rolf, who hesitates to turn them in because he feels conflicted. The Captain invites Rolf to become a part of their family and go to Switzerland with them. Faced with the prospect of being integrated into the cuckoo clock routine, Rolf decides he would rather remain a Nazi. He blows his whistle to alert the stormtroopers to their presence, and the Von Trapps run away. Because their cars have been vandalized by nuns, the Nazis are unable to pursue the Von Trapps, who have to cross the Alps on foot in order to get to Switzerland. It is described as a long and perilous journey and since the family has brought no visible provisions with them, it is implied that Maria and The Captain may have to eat one or more of the children in order to survive.

I liked The Sound of Music because it has good story and good songs and everything about it was really entertaining. I liked it when Maria taught the children how to sing Do Re Mi, and also the part where she and the Captain danced, and then the puppets were really cool as well. It reminded me of another show I saw called Next to Normal, which also is about a family, and in which people sing too. But it’s not just because of the families and the singing that these two shows are alike. As in Next to Normal, The Sound of Music also examines the manner in which the mental imbalance and compulsive behaviors of one family member (in both cases, the maternal figure) can upset routine, distort a family’s perception of reality, and infect all its members, drawing them into her dysfunction to a point where “normality” ceases to exist within the structure of a family’s daily life. The Von Trapp children are well-adjusted when we first meet them, leading an existence characterized by discipline and order. Once Maria has exerted her influence over them, the children, and eventually even the father, come to share in her disorder, and assume her compulsive tendencies — they just can’t stop singing and they actually come to think that their singing-and-dancing cuckoo clock routine is endearing and fun as opposed to just creepy and wrong. It is the harrowing disconnect between perception and reality which reveals the dark undercurrents of depravity and despair lurking just beneath the surface of what is purportedly intended as wholesome family entertainment about a chipper nun working in child care, examining how easily interdependence and enabling can breed dysfunction and madness. So I liked it because of its psychological underpinnings, and also because the music was really good, and the puppets were cool. Maria is played by Julie Andrews, who has a really good voice and looks kind of like Mary Poppins. I would recommend this movie to people who like singing and musicals and also to those who have a family member who suffers from an extreme form of mental illness.

Comments:
Josh, this is awesome. The End.