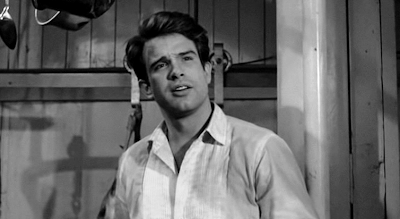 By Edward Copeland
Mickey One has a great visual opening. Three overweight men, nude except for towels and, in one case, an armed gun holster, laugh uproariously in a steamroom. One of the men slaps another person on the back: The back belongs to Warren Beatty, fully clothed in suit, a bowler, even gloves and smoking a cigar. Then the credits begin. It really doesn't give you an idea of what sort of movie you are about to experience, but even after Arthur Penn's third film finishes, you still probably won't be certain what you've witnessed.

Beatty stars as a semi-successful stand-up comic in Detroit, if by successful you mean he manages to stay employed at a mob-run club. We don't even know his name and throughout the entire film we see very little of his act to know if he's very funny. It doesn't really matter to Beatty: His hedonistic lifestyle provides too many joys to worry about such things, There are countless women for him to bed, plenty of cash for him to play at the illegal casinos. It's a charmed but secretive life, until one day he gets the message from the club's manager Rudy (Franchot Tone) that he's done something wrong.

In a wonderfully frustrating scene for Beatty's character, he tries to get answers out of Rudy as to what he's done wrong: Did he sleep with the wrong girl? Did he accumulate too much in gambling debts? Why does the mob suddenly want him dead? Rudy literally gives him no answers as Tone just sits at his desk with a slight smile on his face to the point that you think he may never speak a line in the entire film.

It's enough to scare the wits out of Beatty's character, who books it out the kitchen exit and down the alley to parts unknown. Suddenly Rudy, who had been in a suit, stands in the doorway in a smock, meat carcasses hanging near by, yelling to him that that there is "no place you can hide from them." Beatty will take his chances, burning his Social Security card and all other forms of ID and hopping a train and assuming the life of a homeless hobo as he heads toward Chicago.

As he hangs out of with other homeless in Chicago, he witnesses the beating death of a man and takes part in the looting of the body. After a brief tug-of-war with another man, he gets the dead guy's Social Security card and assumes a new identity, Mickey One, and lands a job cleaning out the trash in a soup kitchen.

Penn, working from a screenplay by Alan M. Surgal, definitely shows the influence of the French New Wave in this 1965 film but it also pays just as much homage to Franz Kafka in the way Beatty's character gets marked for persecution for some unknown transgression. While Penn had far more success fusing New Wave techniques with American film traditions two years later in Bonnie and Clyde, the purer Americanized vision of a New Wave movie in Mickey One doesn't quite pull off what it's trying to do, but it contains so many interesting aspects that it's a fascinating artifact.

Mickey doesn't stay a cleaner for long. When he wanders into a club and starts doing the jokes with the onstage comic, he gets another shot to go on stage under his new identity at the place owned by Mr. Castle (played by Hurd Hatfield, who also appeared in Penn's directing debut, The Left Handed Gun). Hatfield, whose most famous role was as the title character in 1945's The Portrait of Dorian Gray and based on his physical looks in this film 20 years later, I wonder if Hatfield didn't really have an aging picture in his attic.

Castle initially plays as a booster for Mickey, telling him that his talent is a bridge and the the successful comic is the king of show business. However, once a mysterious man (Jeff Corey) arrives demanding to see Mickey's act after Mickey has begun to romance a woman named Jenny (Alexander Stewart).

It's at this point that Mickey's paranoia really kicks in and Penn really embraces the New Wave style. He flashes back to conversations with Tone where Beatty names an actual figure as a possible gambling debt as a reason for his death sentence to which Tone replies, "How do you know it's not your whole life?"

Jenny tries to calm Mickey, as when he makes a quick escape from a forced performance, asking him what he's guilty of only to get Mickey to respond, "Of not being innocent"

Penn's visuals border on the expressionistic, aided by the crisp black-and-white cinematography of Ghislain Cloquet and a jazzy score by Eddie Sauter with improvisations by Stan Getz. Demolitions become a recurring theme such as an oddly beautiful scene where a man sets up an art installation around the word "Yes" only to see it destroyed by fire but then proceeds to swim and float in the foam used to extinguish the flames.

Other imagery includes the a ringing telephone that keeps contrasting with scenes of Beatty in various dress diving into a swimming pool and the use of spotlights and shadows when he's behind the microphone on the stage. Beatty gives one of the loosest performances I've ever seen him give, even more so than when he's trying to be loose on purpose in a later work such as Bulworth.

It would be a mistake to say that Mickey One reaches a climax because it's not that type of film, but as Beatty takes the stage one more time, he delivers his set in almost a whisper, before suddenly he's giving the routine outside in the middle of nowhere.

While Mickey One can't truly be called a successful film, but Penn certainly produced a fascinating one but, as was the case with The Left Handed Gun, the movie really showcases a director finding his way in a medium that was new to him at the time and that he would he later take the positive lessons he learned and translate them into some of his future masterworks.